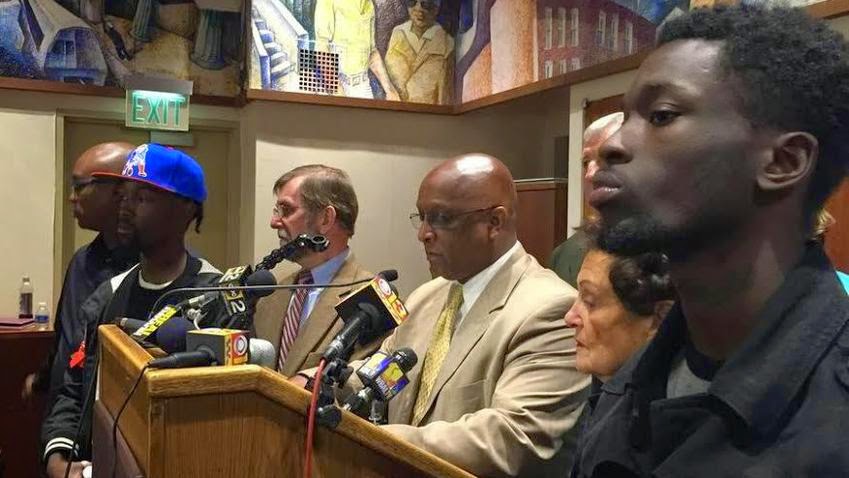 Last night in a live broadcast, City Counsel President Bernard C. Young said he was "pissed" about the violence in Baltimore and said it was the "thugs" who caused it. This is pretty much what most people saw in the attacks on police, business and citizens.

Today, however,  a change has taken place.  It is in language, and in demeanor.

The Bloods and Crips are not just violent and dangerous gangs of criminals who work mostly in narcotic distribution and prostitution, selling drugs to children, violently oppressing women, and upholding strict standards by death, but are now protectors of the peaceful protestors in Baltimore, and the "thugs" are just "misguided youths" who injured police, burned, and looted.

Someone has been given a good talking' to about his words.

Gang members are publicly 'coming out' against violence. This should reassure the citizens of Baltimore.  You don't need the Guardian Angels, you need the gangs, instead.

“What we’re seeing today is not about Freddie Gray,” Young said. “It is about the pain, the hurt and the suffering of these young people. There’s no excuse for them to loot, riot and destroy our city. I made a comment out of frustration and anger when I called our children ‘thugs.’ They’re not thugs. They’re just misdirected. We need to direct them on a different path by creating opportunities for them.”

Here is the Baltimore Sun's article:


City Council President Bernard C. “Jack” Young said politicians, faith leaders and gangs must come together to stop the violence in Baltimore.
“These men have been out on the street quelling the senseless violence that has consumed our city,” Young said.


Baltimore Police said Monday they had received a "credible threat" that rival gangs have teamed up to "take out" law enforcement officers. Police said in a statement that they have received information that members of "various gangs" — including the Black Guerrilla Family, the Bloods and the Crips — have "entered into a partnership" to harm police.
Young called those comments “false” Tuesday.

After two weeks of tension over the death of Freddie Gray, Baltimore descended into chaos on Monday. Roaming gangs of mostly young men clashed with police in the streets, seriously injuring officers, tore open businesses and looted their stocks. Gov. Larry Hogan declared a state of emergency and called in the National Guard, and state police requested as many as 5,000 reinforcements from neighboring states.
Mayor Stephanie Rawlings-Blake instituted a weeklong citywide curfew from 10 p.m. to 5 a.m. starting Tuesday.
Young also apologized for comments he made Monday night in which he referred to rioters as “thugs.”

“What we’re seeing today is not about Freddie Gray,” Young said. “It is about the pain, the hurt and the suffering of these young people. There’s no excuse for them to loot, riot and destroy our city. I made a comment out of frustration and anger when I called our children ‘thugs.’ They’re not thugs. They’re just misdirected. We need to direct them on a different path by creating opportunities for them.”
Councilman Nick Mosby called the riots a “wake-up call” for Baltimore.
“Our city is hurting,” he said. “Our youth are hurting.”
(end of article)
Peter Hyatt as Statement Analysis Blog at 5:03 PM

These kids have no need for joining isis.
They can destroy their country right here.

I fault all the adults who did nothing constructive when it was obvious that Gray's death would be used as an excuse.

The mayor and chief of police are quoting from the bho politically correct dictionary.
Why didn't the governor realize what he was dealing with a day earlier and take charge?

And the real losers (after Gray), are, as usual, the very hard working, vulnerable and exposed shop owners, who had nothing to do with the Gray death.
And the other losers are the police, some physically hurt, and all getting blamed by bho and his ilk again.


Is there anyone who will stand by their statements except criminals!

What bothers me the most, is when politicians roll out the standard pharase "we need to create opportunities for our youth." Well, they had better wake up and realize that with the advent of drones, artificial intelligence and robots literally ready to be employed by the private sector, the opportunities for human beings are dwindling at a rate far faster than Bill Gates ever envisioned (or maybe he did.)

Does anyone else really beleive that these are real gang members?

I mean the are coming together to stop the violence?

There very existence is violence. So now, they want to stop the violence?

It just makes no sense to me.

Trustmeigetit, I think they are "coming together" for one thing only, and that would be to kill white cops.

Anon said:
Now the po po are claiming that Freddie Gray tried to injure himself in the van!

It was the other black prisoner in the van that stated he was injuring himself in the van. Not the po po. You are full of doo doo!

You are posting misinformation.

"And what did they do to Freddie Gray during the next several ensuing days; ignore his pleas to just let him lie there and die, when he was in screaming pain and needed medical treatment and you saw and heard this for yourselves?"

"Lay the blame on the dying man that you allowed to die after you inflicted his slow-painful-death injuries."

-Gray was transported to a trauma center after arriving at the precinct, where paramedics worked on him for 21 min. He remained at the trauma center, receiving care and treatment until his death days later.

A timeline for reference:

(Also, please note that Gray's autopsy showed no signs of a beating.)

The preliminary autopsy report has not yet been release. However, the article that I posted above states:

"Multiple witnesses tell The Sun they saw Gray beaten, but police say evidence, including an autopsy, disputes their accounts."

How interesting that you chose only to address this topic, rather than the factually inaccurate information you posted. ;-)

I prefer to wait for the official release and then begin analysis of statements.

In light of "hands up", we have been given the power of deception.

Another: the German plane crash: They reported that if a pilot is lying about his mental state, there's nothing they can do...

wrong: get some training!

The criminal who heard him "self injuring" but could not see him:

how did he know his intent?

This is why I prefer to phrase it in the qualifying, "What if...?" that I used.

What if police did not injure him...because I do not yet know.

I know what happened in Ferguson because of Statement Analysis of the shooter's words.

There is no way Bloods and Crips were protecting anyone.

"police say..." would have made your statement accurate