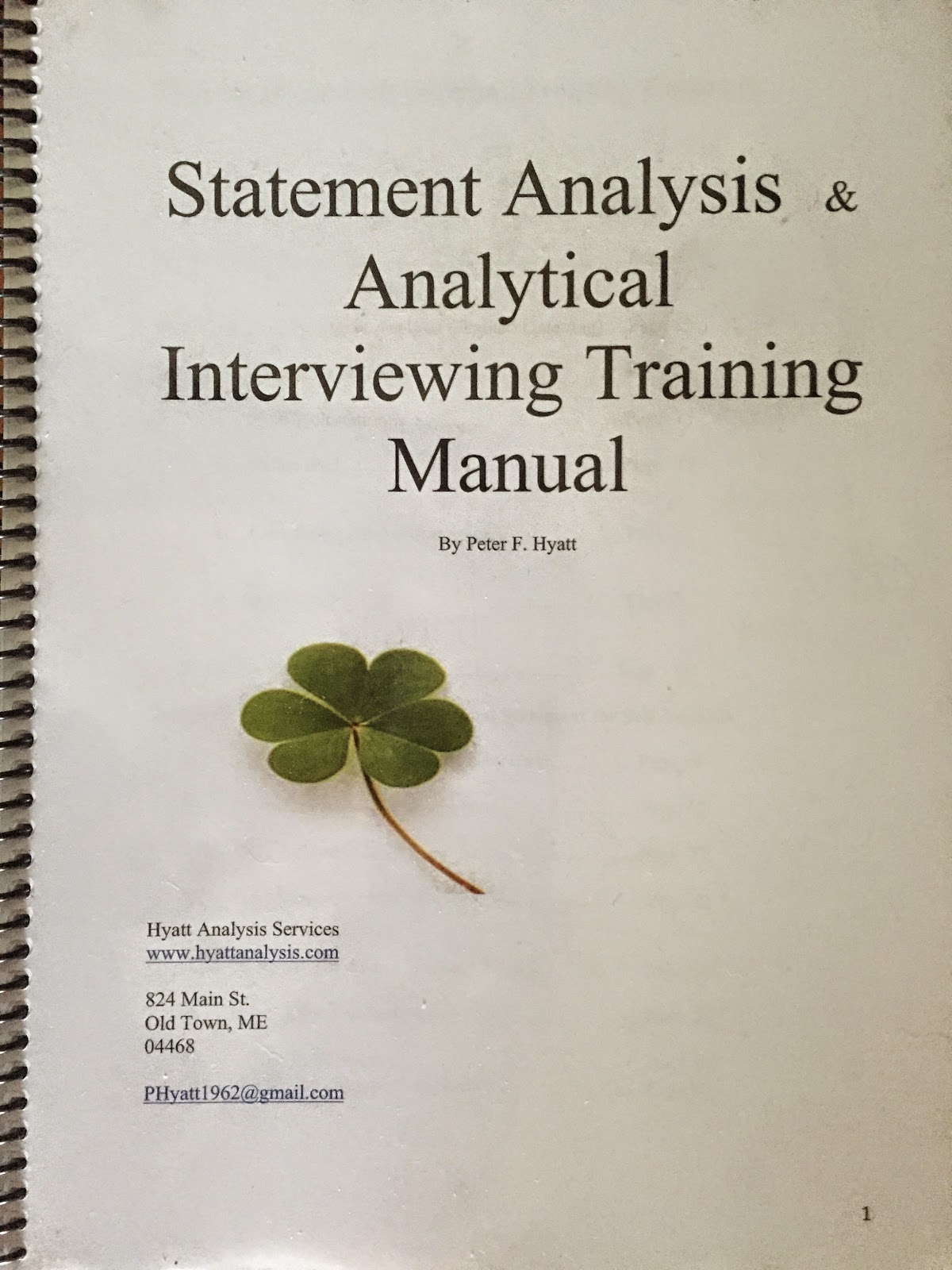 We are pleased to announce that our course in Statement Analysis and Analytical Interviewing Course is complete and ready to ship.

CD Audio of more than 7 hours of audio lectures.

Upon successful completion of the course, including the final exam, there is provided 12 months of e-support, including assistance with analysis, interview preparation and case strategy.

The successful completion also means eligibility for University of Maine's CEU (Continuing Educational Credits) for professional license requirements and a Certificate of Completion allows for inclusion in one of the the monthly online training programs, where detectives, business professionals and social service professionals work through live, ongoing cases, with confidentiality agreements.  This includes some well seasoned detectives advancing both the cause of justice and their own careers through Statement Analysis training.  For more information on this course, or if your department or business would like to host a training seminar go to:


Please note that if your department is unable to cover the cost of your tuition, please send an email directly as we are working on a sponsorship program to help train any officer who wishes to apply himself.  This training is not easy, nor is it a "101" training course.  It is in-depth and all tests and homework assignments must be successfully completed before the final examination is taken.  This may include re-takes and/or additional work.  The end result will be lie detection and content analysis second-to-none. It is both education and understanding as you are not only expected to memorize principle and apply them, but to be able to explain them.

This is a game changer.

When one understands the psychology behind a principle, the application becomes less 'forced' and more natural.  Learning is coupled with understanding and this accelerates the entire process.

This course is now ready for:

in short, anyone who wishes to learn deception detection techniques.

Yay great news Peter, Now, the question I and i suspect a few others want to ask is...

Many of us probably just followed the links and found the answer ourselves. $395.

His parents have BOTH been arrested, and charged with abuse and neglect. Their 6 month old has been removed from their custody. LE has indicated that more serious charges will follow, pending toxicology, and 'sensitive' autopsy reports.

Congratulations on getting the course online! I think that is a very reasonable price and no reason why all law enforcement and businesses aren't using it with the convenience of online availability.

Congratulations on getting the course online! I think that is a very reasonable price and no reason why all law enforcement and businesses aren't using it with the convenience of online availability.

I will vouch for you GetThem when you ask him/tell him.

If all else fails, tell him it's your birthday, christmas, valentines and easter present. :)

MYRTLE BEACH, S.C. - The family of a missing young Myrtle Beach woman says that social media messages are becoming difficult to deal with and are causing "hurt" in the community.

Parents of 20-year-old Heather Elvis, who vanished about a week before Christmas 2013, have been dealing with various problems with anonymous folks since just before an Horry County couple were charged in the murder and disappearance of their daughter.

Tammy and Sidney Moorer, who were arrested in March of last year, were released from jail on bail about 2 months ago.

More News: Full coverage of the disappearance of Heather Elvis

During a January bond hearing for the Moorers, Heather's mother, Debbi Elvis explained to a judge about a long history of angry and rude social media messages her family has had to deal with.

Now, the Elvis family says that cyber-harassment on social media is causing "division" in the community.

The Elvis family plans to meet with various members of the media Thursday to talk about the problems.

"Now we have trolls who have come in and caused division and chaos in this same community," Elvis wrote.

Related story: Who are Tammy and Sidney Moorer?

Debbi Elvis hopes that the media can help cut down on the social media attacks, which she says have been going on for 15 months.

"I'm asking that you all come together to help me educate the public about who and what they are dealing with online," she wrote to News13.

"I don't know if this will help, but too many people are continuing to be hurt and it is the only way I can think of to help the situation," she added.

Elvis included a link to a web story about how to cut down on social media harassment.

It's unclear who in the community is sending the messages -- the Moorers have also complained about getting numerous cyber-threats in the past.

Judge Dennis also said that the Moorers must have no direct or indirect contact with the Elvis' and and he was very stern about social media.

"Facebook and those things are a scourge on our society," Judge Dennis said. "Stay away from them!"

Thanks for the update Jen.

This article outlines the charges they are each facing as of tonight. They are being held with no bond, and LE made it clear that more charges are expected upon completion of the autopsy findings.

The charges are telling, as the mother is accused of placing Noah in the septic tank, after he overdosed on heroin. It has not been made clear how the overdose happened, but her second charge includes "forced ingestion of dangerous substances".

"Paul Thomas was charged under a subsection of the law that relates to “reckless disregard for human life.” His charges are a Class 6 felony and carry with them a minimum of a one-year prison sentence and up to five years for each charge.

Ashley White was charged under two different subsections of the law. One charge, like Thomas’, relates to “reckless disregard for human life” and carries with it the same punishment. However, she is also being charged under a more serious subsection that is a Class 4 felony which is punishable by no less than two years and no more than 10 years.

That subsection involves “serious injuries” to a child that were received under an adult’s care. Those injuries, as defined by state code include: “disfigurement, a fracture, a severe burn or laceration, mutilation, maiming, forced ingestion of dangerous substances, or life threatening internal injuries.”

I'm sorry, Jen. I know you've followed Noah's case from the beginning and I wish it would have turned out differently.

Thanks Sus! I wish it would have too.

It's been a really sad case, and disturbing on many levels. I blows my mind that someone (apparently a family member) waited until the 5th day of the search, when a measly $5K reward was posted, before they gave up his location. The family has led a campaign of misinformation from day one, and it's so disgusting. The people who should have been Noah's biggest advocates never searched a square inch, and did nothing but impede the investigation.

We've all seen it before, but it's so infuriating!

Would love to see some analysis of this very recent statement. Think the hubby says a few odd things. How about you?
https://www.youtube.com/watch?v=xAlM9V8UsKI

I just read an article that featured the parents' mug shots, and though it's not scientific, I can't help but think the father looks devastated, haunted, and the mother looks like she's irritated someone disturbed her nap time.

The original (young looking) mug shot of the father that was attached to the article is from an earlier arrest. His current mug shot was posted late last night, and it REALLY shows the toll that drugs have taken on him.

To me he looks dope sick, but at least he has tears in his eyes!

I agree, she looks annoyed, or indignant.

I've got a Lt from Maryland who is going to receive some sponsored assistance on tuition!

He is trained in analysis and is quite good at it, but (as I will quote him) said it is a lifetime of learning to it. I so love the attitude!

Anyone who wishes to donate, use paypal and even a small donation of $5 applied is helpful.

Thank you to those answering the call.

We are making a statement against racism. It's a bit louder than you might think.

Bikram Choudhury, the 69-year-old hot-yoga guru who has been accused of rape and sexual assault by six former students, has spoken out for the first time – and says he would never have to resort to physical aggression for sex because "women love me."

"If I really wanted to involve with the women, I don't have to assault [them]," Choudhury said in an interview with CNN, which aired Wednesday. "I never assaulted them."

"I don't think they're bad people," he said of his accusers. "They're influenced by lawyers."

But Sarah Baughn and five others claim the Bikram founder – an icon to celebrities such as Madonna, George Clooney, Brooke Shields and Jennifer Aniston – indeed sexually assaulted them.

"We need to make this a relationship … I've known you from a past life," Baughn said Choudhury told her during her first week of teacher training when he called her into his office. "I felt like my whole system imploded."

Continued Baughn, who initially credited Bikram with transforming her life: "He crawled on top of me, he put his hand on the inside of my thigh … he told me he needed someone to hold him, to brush his hair … to have sex."

Baughn, who has a trial date set for August according to The New York Times, claims Choudhury made it clear she had to sleep with him in order to advance her career, stating she would never win a yoga competition if she didn't have sex with him.

An emotional Choudhury said the allegations have devastated his family and that his wife of 30 years will no longer "look" at him.

"We die only once in our life. I die every day," he said. "I work harder than any human being on this earth. And this is the reward? I'm a rapist?"

Concluded Choudhury: "Shame on your Western culture. It's your job to go and tell the world the truth."