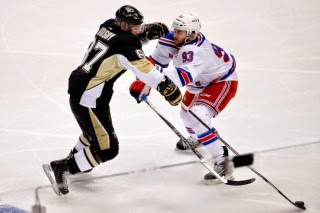 Cheating to win is not sportsmanlike and a victory that came from cheating is not a victory worth celebrating.  Does this statement make me antiquated?

Take a look at this video:

This makes me "old school" and certainly no fan of the ESPN Sports Center highlight films in which athletes display unsportsmanlike behavior for the camera, while agents insists that these 20 second clips translate into hundreds of thousands of dollars for their clients...and themselves.

Hockey has recognized the element in cheating of unsportsmanlike conduct when a player feigns being injured in order to gain an advantage.

It is deceptive behavior and it is cheating.

For the old school, it is unmanly behavior.

Here is a video from last night's Rangers-Penguins game where a known cheater (history of "diving") feigns injury where he skates to the bench, and the captain, Sidney Crosby, covers the smile on his face.  Crosby, one of the most talented players, is often the target of hatred throughout the league for his history of diving.  Commonly questioned, but never answered is this:

Why would someone of such immense talent want to win by cheating?

This is often coupled with, "Yeah, but wouldn't you love to have Crosby on your team?"

I would, but he'd have to stop the diving and whining.  In one NHL poll of players only, he was voted the most "whining" player in the league, by such an immense percentage, that taken all the other vote getters in the poll collectively still did not reach Crosby's level.

This was a poll by his peers; not partisan fans.

In high school, I was impressed when a classmate openly admitted cheating on an exam and took a "zero", even though he had not been caught.  His conscience, overnight, compelled him to the confession.

Below is a video from last night, but in the spirit of fairness, there are also quotes from two New York Rangers who were called for diving in the same game.

Was it, as claimed, a reaction to the screaming of the Flyer's coach at the refs, insisting that the refs be "on their guard for diving" by a Ranger team that had only taken 2 such penalties all season?

"I did not dive" is simple, straight forward and reliable.  "I did not embellish" is another simple reliable denial.

We need to hear:

I.  the pronoun "I"
II  the past tense "did not" or "didn't"
III the allegation specifically mentioned "diving", or "embellished"

Let's let the two New York Rangers speak for themselves:


“I didn’t think I was diving, but the refs make mistakes like we make mistakes. I thought it was a bad call. I think everyone who watches me knows I don’t dive. That’s what I thought when I got the call — I would never dive. But it’s forgotten now.”  Mats Zuccerella
To use the word "think" is to express doubt.  He allows for a contrary opinion.  This, by itself, is to show weakness, but should we consider this 'denial' to be deceptive? Let's look at the entire statement, point by point, to lead to a conclusion:
1.  The word "think" is a weak assertion
2.  "we make mistakes" is to use the pronoun "we", and not the pronoun "I", but owns that "mistakes" are made by players, of whom the subject is part of.
3.  "thought" is another use of "think", indicating weakness.
4.  "think" is used again; allowing for him, and others, to "think" contrary to his assertion
5.  "watches me" is present tense language regarding a past tense accusation
6.  "I don't dive" violates the second component of using past tense, even though component number one (the pronoun "I") and component number three (accusation) is here.  "Don't" is present tense and avoids "did not" or "didn't"
7.  "thought" is used again, making the repetition very sensitive
8.  "I would never dive" uses the future/conditional tense, "would"
9.  "I would never dive" uses the word "never" which avoids a specific time frame and is unreliable.
10.  "it's forgotten now" is similar to "there is no more information you are going to get out of me", that is, to stop the flow of information.

He is not only unable to say "I didn't dive" but employs many words in order to persuade contrary to what his own words cannot assert.
Analysis conclusion:  Deception Indicated
How about his team mate, Derek Dorsett?
Citing the principles above, what do you do with the two statements to follow?  Put your analysis in the comments section:
Derek Dorsett also disagreed with the call against him.  “I can’t see him coming, and I’m in a vulnerable position — I don’t think I embellished. If I’m going to dive, am I going to dive face-first into the boards?”
Regarding the screaming at the refs, he said:
“I’m not sure if it changed their mind after they started yelling,” said Derek Dorsett, “I watched the replay, and I don’t think there was any embellishment.”

In 2015, if the Stanley Cup was won because of cheating, as in diving, I would not be able to celebrate it.  When I was a boy, cheating was considered "anathema" yet if you do an internet search on "diving in hockey", you will not find my opinion shared by many players, many sportswriters, and many fans.

A few years ago, Philadelphia Flyer fans often wrote about how they felt that the NHL, a mega business with millions of dollars constantly at stake, was unjustly favoring the NHL's marquee name, "Sidney Crosby" so that ownership could sell more tickets, city after city, and sell more jerseys, and even raise commercial rates for television.

Sifting through juvenile and partisan comments, and watching video reviews indicated that the complaints were justified.  Bizarre events such as Crosby "slew-footing" a player to the ice only to find the player, himself, called for a penalty, only increased the anger towards the player many called "pampered" and "spoiled brat."  Even Canada's own Don Cherry went public in demanding Crosby stop diving and the "head bobbing" which was then met with a 15 second delay imposed upon him, reminding even the old schoolers:  this is a business first, and a sport, second.

Since that time, Crosby's own behavior, particularly his now famous "head bobs" as well as his screaming at refs, harmed the owners' expectation of sales in that Crosby's reputation has caused him to be despised in city after city, while neglected stars that are not promoted, such as Steven Stamkos and Alexi Ovetchkin, like the Gretzsky's of yesteryear, are cheered.

It would appear that NHL preferential treatment has diminished, as have fans' complaints, in the past few seasons.

Do you find this to be so?

Hockey fans are pretty rough, but the video has much to show.  I could not find a compilation without music or commentary, but this one is the 'tamest' of them all.

The mother of the man slain by Aaron Hernandez is moving forward with a civil lawsuit against him and her lawyer said the former New England Patriots player will be called to testify at the trial.

Ursula Ward, the mother of Odin Lloyd, wants to look Hernandez in the eye when he testifies during the wrongful death suit. according to attorney Doug Sheff.

Hernandez, who did not testify at his criminal trial and had a $40million contract, was convicted April 15 of first-degree murder for killing Lloyd on June 17, 2013.

Sheff, who called Lloyd's death an unthinkable loss said: 'She wants to ask what happened.

'And the next question: 'Why?'

Ward said during a press conference on Wednesday: 'The day I learned my son was shot and killed, I thought my life ended with his.

'I always wished I was there to take those bullets for Odin.'

She did not address or take questions about the lawsuit but focused her comments on her love for her son.

'Odin was loved by many,' she said.

'Odin will be missed tremendously.'

Sheff said it was possible he would call Patriots officials, including owner Bob Kraft, to testify if he thought their testimony would be 'relevant', according to the Boston Herald.

He said: 'We will also call different witnesses in the civil case, including Mr Aaron Hernandez.

'When we do he will no longer be able to hide behind any sort of Fifth Amendment rights against self-incrimination because he is already convicted of the crime.

'No one wants to unnecessarily disturb any professional or anybody, but if it is important and it is part of zealously representing our client, then we will do what we have to.'

The team was originally named in the suit, but the organization was dismissed after agreeing any money released to Hernandez would be granted to the Lloyd family, Boston.com reported.

The Patriots terminated their contract with Hernandez shortly after he was charged and team lawyers have said New England does not owe the 25-year-old 'another penny'.

He had already been paid more than $9.2million of his $40million deal and the NFL Players Association filed a grievance on his behalf seeking in additional $6.2million in guaranteed money.

They are awaiting the outcome of the grievance said Donald Grady, another of Ward's lawyers.

The Patriots and Ward's lawyers have agreed that if it is determined the team owes him more money, it will not pay Hernandez but will instead hold onto the money and alert them and the court.

The lawsuit seeking unspecified damages was filed in December 2013 but was put on hold during the criminal trial.

While an appeal is automatic in the criminal case, Sheff said he plans to file papers in the next few weeks to resume the lawsuit so he can hunt down Hernandez's assets.

One asset they do know about is his home in North Attleborough, which is assessed at $1.2million.

Sheff said that he's not confident Hernandez has any money left after defending himself in the criminal trial but that Hernandez clearly made millions during his career.

He said Lloyd's family isn't in it for the money because no amount can compensate for their loss.

Lloyd, 27, was dating the sister of Hernandez's fiancee.

Hernandez picked him up and drove him to an industrial park near his home, where Lloyd was shot six times.

His client, who is also facing criminal murder charges and being sued in civil court in connection to a 2012 double murder, was moved to Souza-Baranowski Correctional Center in Shirley, Massachusetts, on Wednesday.

The Patriots, who won their fourth Super Bowl in February, will visit the White House on Thursday.


Oh, Lloyd's family is not doing this for the money !

Unclear why the football team will/has paid mother of killed with the hernandez salary ?

I was wondering the same thing, and after reading it again I don't think they are agreeing to pay it directly to Lloyd's mother, (although that is what the author of the article seemed to imply) but rather agree that they will notify her, and her representation, if they are forced to pay the remainder of his guaranteed contract, so that she, and her reps, can move to freeze/garnish the funds for their civil settlement, if one is reached?

(I doubt they will be forced to pay the remaining funds anyway, considering the circumstances.)