Statement of Husband of Woman Arrested Attempting to Join ISIS 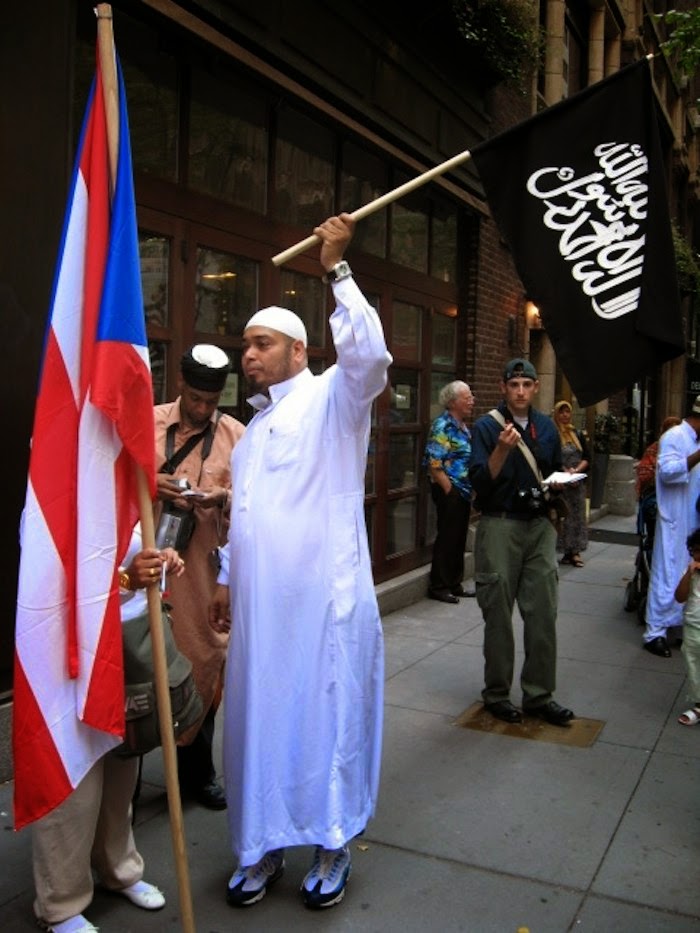 “I don’t believe any of it, period. We are all shocked, the whole community. That’s not who she is.”

Did it really come as a shock to him?

Shortly after making this statement to the press, the above picture came out, from the 2007 NYC Muslim Day Parade in which he carried the black flag of jihad.  In one interview, he used the word "wives", but kept talking and was not asked, "Did you just say 'wives'?"

“I don’t believe any of it, period. We are all shocked, the whole community. That’s not who she is.”

Note that he does not believe it is emphasized with "period."  One may not "believe" the charges while still knowing.
Next, note that he is unable to say "I am shocked."  We have a pronoun change to "we" signifying a change.  The desire to turn plural is examined:
this may be used in an attempt to persuade, or strengthen the "shock."
Note next the distancing language with "that", as 'far away' from who she "is", while avoiding what she did, in the past tense.

We do not need the picture of jihad to conclude:  Deception Indicated and show that Abu Bark was involved in his wife's decision to join ISIS.  The deception does not end there.  Note the dropped pronouns and the refusal to issue a simple reliable denial:


“That’s not what we promote here,” said the imam. “Very friendly, nothing political, nothing extremist. . . . If they were doing it, they were doing it on the down low.”
What did you expect him to say? “Oh, yes, we put them up to it, kaffir”? “Yes, we all knew about what they were doing, and we all approved”?
It is no surprise at all that Imam Charles Aziz Bilal of Masjid Al-Hamdulillah would say these things. What is unfortunate is that the mainstream media takes these statements at face value, with no attempt to determine whether or not he is telling the truth.
“Bomb suspects Noelle Velentzas and Asia Siddiqui described as devout Muslims with no hint of extreme leanings,” by John Asbury, Alison Fox, and Zachary R. Dowdy, Newsday, April 2, 2015:

Those who saw Noelle Velentzas and Asia Siddiqui attending services at their masjid, or walking in their Queens neighborhood said the former roommates were devoted to Islam and family — but never showed interest in violent jihad, as authorities charge.
“They have been an upright family,” said Imam Charles Aziz Bilal of Masjid Al-Hamdulillah mosque on Sutphin Boulevard, speaking of Velentzas, her husband and daughter.
Both women attended the masjid and appeared to be upstanding members, he said.
“Very honest, very sincere, very dedicated family,” he said of Velentzas and her husband, Abu Bakr. “They’re family-oriented. They have children in the community, born in the mosque. Good religious people.”

Peter Hyatt as Statement Analysis Blog at 8:45 AM


We can tell ourselves that when muslims succeed in destroying our world, and are only left looking at like people,
then they will start with political correctness judgements and condemnations of each other, and we know the results of that.

The sailor who claimed to have ‘miraculously’ survived for 66 days at sea has responded to sceptics around the world – saying: ‘God knows I am a truthful man’.

Louis Jordan, 37, who was rescued 200 miles off the North Carolina coast, said he survived for more than two months on his stricken boat by eating fish he caught by trailing dirty clothes in the ocean, and by catching rainwater in a bucket.

But doubters have questioned how Jordan – who declined medical help despite claiming to have broken a shoulder and who appears well-fed, with pale, unblemished skin – seemed in such good shape after such a gruelling ordeal

Rebutting his critics for the first time yesterday in an exclusive interview with The Mail on Sunday, he said: ‘God knows I am a truthful man. My family knows I am telling the truth. The people who know me know that.’

He added that the authorities had checked he had not withdrawn money from his bank account when he first went missing, though they will now scrutinise his credit card and bank statements for any activity during the period he says he was drifting.

Jordan said his morale was boosted by reading the Bible from cover to cover, but claimed he lost 50 lbs after his supply of tinned food ran out and his diet was reduced to raw fish.

He also gave colourful examples of his experiences, from encounters with two killer whales who had ‘such beautiful faces, they looked so friendly’, to sailing through shoals of glowing phosphorescent jellyfish at night.

Jordan, an amateur sailor who had been living on his boat, the 35 ft Angel, set off on a fishing trip from Conway, South Carolina, on January 23. He was reported missing six days later.

The sailor claims he broke his shoulder during one of the three times his boat was knocked over in heavy seas – destroying the mast, rudder and radio – yet he has shown no obvious sign of injury.

Last night a US Coast Guard spokesman said: ‘We don’t have any reason to doubt him but nor can we confirm he spent all this time out there. We are looking forward to learning more about what exactly happened. We are as keen as anyone to find out the truth.’

Survival expert Erik Kulik, of the True North Wilderness Survival School, said: ‘I would have expected him to be severely dehydrated.

‘After that amount of time at sea he would have been wobbly on his feet and yet he seemed to walk perfectly. He says he broke his right shoulder and yet he didn’t even seem to be guarding that shoulder in the pictures I saw after the rescue. There is a lot that doesn’t add up.’

Jordan, who was rescued on Thursday, said his shoulder injury had healed, adding: ‘I have a bump but it’s fine. I feel no pain right now. After two months at sea it healed.’

He said he survived through ‘lots of prayer’, reading the End Time Prophecies and catching seaweed, crabs and fish by trailing dirty laundry off the hull.

He said: ‘One day I caught a jellyfish and I know you can eat some types of jellyfish. I put it to my lips and it stung so badly...I spat it out. I had to put charcoal in my mouth for 45 minutes to suck out the toxin.’

Authorities in Virginia are searching for the cell phone of a missing young woman 40 miles from where she was last seen.

Norfolk Police continued to look for Anjelica 'AJ' Hadsell, 18, who has been missing since March 2, and focused on a pond near Carrsville after a new tip.

Local resident Steve Hines said that divers were searching the outer edges of the pond for the Longwood University freshman's phone, which sent strange text messages to her mother shortly after her disappearance.

The teenager was last seen when she was home for spring break driving near her home in Norfolk, roughly 40 miles from the pond searched Friday, according to 13 News Now.

Hines said that police showed him a picture and asked him if he had seen a white van for Quality Plumbing.

He said that he had seen the vehicle, which belongs to a company where Hadsell's stepfather Wesley works, driving along the rural road.

He had been working in nearby Franklin, Virginia, around the time of the disappearance.

The stepfather of the teenager, 36, was taken into police custody late last month amid claims that he knows who has taken his daughter.

He was arrested on March 21 after being interrogated by police for more than 15 hours.

Wesley was been locked up on six charges including four charges of obstructing justice, one charge of possessing ammunition after a felony and one charge of breaking and entering.

He said he broke into the home of the person that he believes took his daughter against her will.

'I couldn't sit a minute away from where my daughter may have been,' he told WAVY.com.

Wesley has admitted to spending roughly 18 minutes inside the home, where he says he searched for evidence by going through the trash and searching under the carpet.

He said he even punched the family dog out of anger.

While searching the property AJ's stepfather claims that he discovered her jacket.

'I found my daughter's jacket in his couch rolled up behind the cushion,' he said.

Officially police have said that they are not ruling out foul play and they have no suspects.

During a search of Wesley's hotel room police found 72 rounds of nine-millimeter ammunition.

He has aroused local suspicions on social media in part because he has a lengthy felony criminal record.

In 2005 his ex-wife went missing for several days and he was reportedly arrested after allegedly kidnapping her and driving her across multiple states.

He also served 54 months in prison for a bank robbery in Fredericksburg, Virginia, according to WTKR.

Now he says that he is a changed man.

Wesley and his wife were estranged when he was arrested, but it is not clear what their relationship was at the time of the disappearance.

Jennifer Busby, AJ's mother, said she received text messages from her daughter's phone shortly after he disappearance but was not sure that the person sending them was actually the missing girl.


Wesley Hadsell was denied bond and the judge said the he was trying to impede the investigation into his stepdaughter's disappearance, according to the Virginian-Pilot.

He admitted to increasing cocaine use, but said that he just wants to see his daughter home.

A neighbor reported seeing AJ driving 'with purpose' and then saw a white four-door vehicle following about a minute behind her.

They say Hadsell was followed by a white four-door compact car less than one minute later, and that another neighbor spotted a similar white car in the family's driveway around the same time.

AJ's family and friends discovered items of her clothing two weeks ago near the side of the road in a remote wooded area in coastal Chesapeake.

Four items were found that belonged to her.

AJ is described as standing at 5 feet 6 inches tall and weighing 120 pounds.