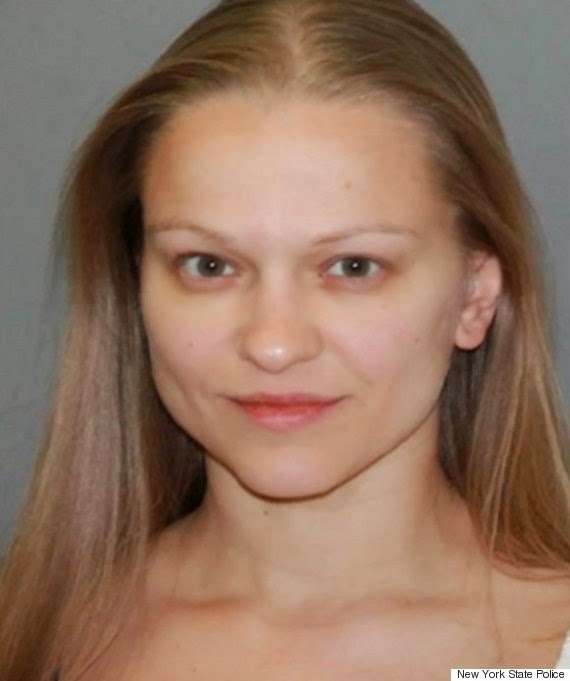 Angelika Graswald has been charged with the murder of her fiance, Vincent Viafore, 46, and says she is wrongfully accused of tampering with his kayak.

A truthful person will speak from memory.  This rapid process, in all cases, is even faster when there is no 'disruption' from experiential memory being formed into words.  Here, she made the statement, "I saw him flip" and stopped.

She said, "so I saw him flip.
And then, didn't think anything bad of it.  He's going to be fine, and I'm going to help him.  He paddled, he paddled.

From Jail she was interviewed, but News 12 did not quote her.   News 12 reported this as an exclusive jail house interview, but gave no quotes only conclusions.

They reported that her diary was found in which she wrote that she was pressured by him into "rough sex", "threesomes" and that she wished him to be dead.

This is an example of very poor journalism.  They report her happy and lighthearted but do not show us, nor let her speak for herself.

The body has not been found yet.

"Got me into  the boat I'm shivering obvious, I just keep thinking where he is."

Note present tense.  The News 12 links cut out her words.  Had they let her speak freely, we would have known if she has been rightfully or wrongfully charged in his murder.  The short videos of her show one who does appear disinterested, and even pleased with the attention of the interview.

Here is a report from CBS.   In it there are some quotes:


Note in this video regarding his last moments:

"I saw him struggling a little bit He was trying to figure out how to paddle the waves because they were getting crazy and and then I just saw him flip.
Peter Hyatt as Statement Analysis Blog at 3:41 PM

Wow. They weren't even married. Why not just divorce him?

Is that her mug shot Peter? That's a big smile for someone who was arrested.

This is going to be great for SA if she talks.

Not something you would expect if someone was fighting to survive in Rapids. And in fact, they typically struggle to speak as water is splashing in your face.

I agree with Hobbs. Another Tifany Hartley.

My first thought exactly Bonnie! He was just her fiancé, why not just break up?!

Possible motive for murder vs breaking up, just my thoughts not actual evidence, he may have made her the beneficiary of his life insurance or she may have purchased one of his life.. And if she's a psycho-- lots of sympathy for the fiancé of the dead, rather than the shame of a failed engagement.

Interview with Reporters: her eyes are downcast, LOTS of shoulder shrugs. She seems rather nonchalant in recounting what happened on the water - I see not signs of distress as she tells the story. "He JUST flipped." - sounds odd, something seems off.

The "I don't think I'm going to make it," supposedly said by her fiancé rings false, not the words I would imagine a drowning person to say. As someone who almost drowned in the river about 30 years ago with my husband by my side. I yelled "HELP!" I was panicked and my husband knew in no uncertain terms, I wanted HELP, I wanted to live!

She was already divorced and using two names - her divorced name and another name (which may or may not be her birth name).

This story reminds me of the movie "A Place In The Sun" where the Eastman character goes to the lake with the intent to drown the pregnant girlfriend.

If she didn't like the fiancé´pressuring her for rough sex (her story, perhaps it's true, perhaps it's not), why not just leave the relationship.

That CREEPY Jodi Arias mug shot says it all!

Notice: pathological liars are very fond of telling wild tells but prefacing them with, "No questions, okay?" Because they know their story will fall apart under questioning.
I hate them.

One of her comments under the facebook picture of her kayaking where she has the caption "If only I could have paddled harder dammit" she writes "I love the fact that because of me someone remembers someone and people reunite. I am humbled to know both of ya" wink emoticon. This narcissistic pleasure at having attention drawn to herself is revealing. She also frames the phrase 'because of me'.

ive met her personally after this happened and i can say from the short talks with her i had with her at orange county jail there is no way someone like her could cold bloodedly murder anyone, let alone PREMEDDITATE it!!!

well, that convinces me!~

You, anonymously met her "personally" and I don't think we need any more proof than that that she is innocent!

did you meet her while wearing matching orange jumpsuits?