When Lance Armstrong went on Oprah in 2013, he was indicated for deception:  he was still lying.

The federal government makes the same allegation in this article from the Daily Mail highlighting the most common form of deception:  withholding information.

Lance Armstrong and girlfriend take break from scandal on boat trip with his five kids: Feds say disgraced sportsman is still lying in $100million doping suit and she has covered up for him

By Ashley Collman For Dailymail.com
Published: 19:02 EST, 19 May 2015 | Updated: 02:29 EST, 20 May 2015
Lance Armstrong took his girlfriend and children out for a boat ride this weekend, perhaps trying to blow off steam as he continues to fight a $100million lawsuit launched by the U.S. Postal Service.
The disgraced former cyclist looked casual in grey shorts and a t-shirt as he took a yellow jet boat out on Texas' Lake Austin on Sunday with his girlfriend of five years Anna Hansen.
While walking out to the dock on Sunday, Hansen held onto their youngest daughter Olivia, 4, while her son Max walked ahead clutching a yellow Gatorade bottle.
Scroll down for video 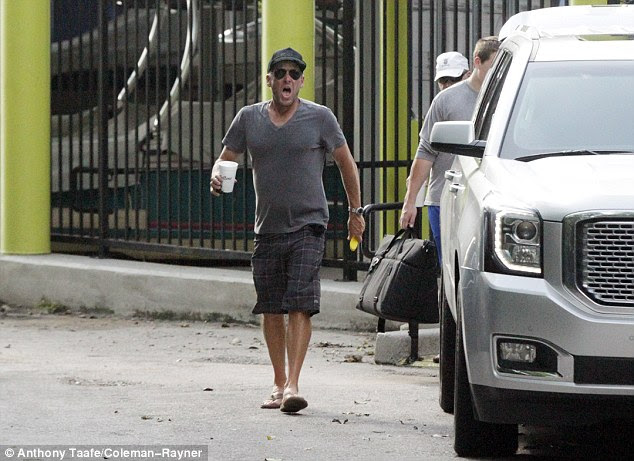 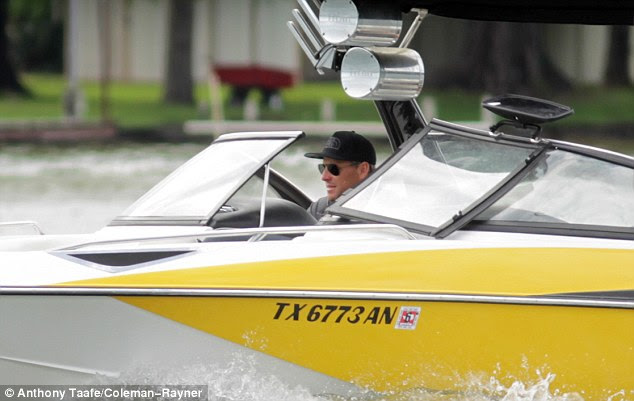 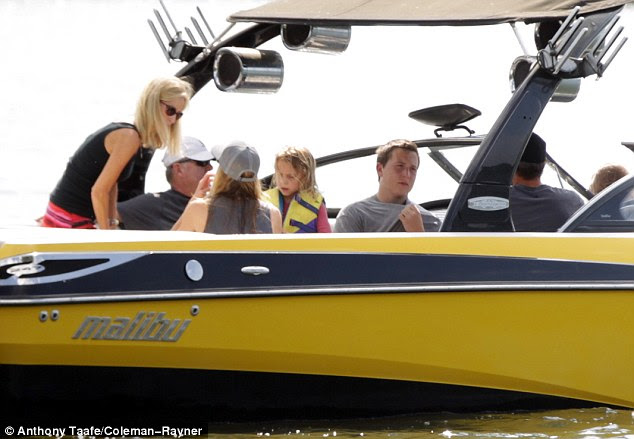 Feds hope Hansen's testimony will show a history of lying on the part of her boyfriend, who they say defrauded the U.S. Postal Service by secretly doping in his athletic prime 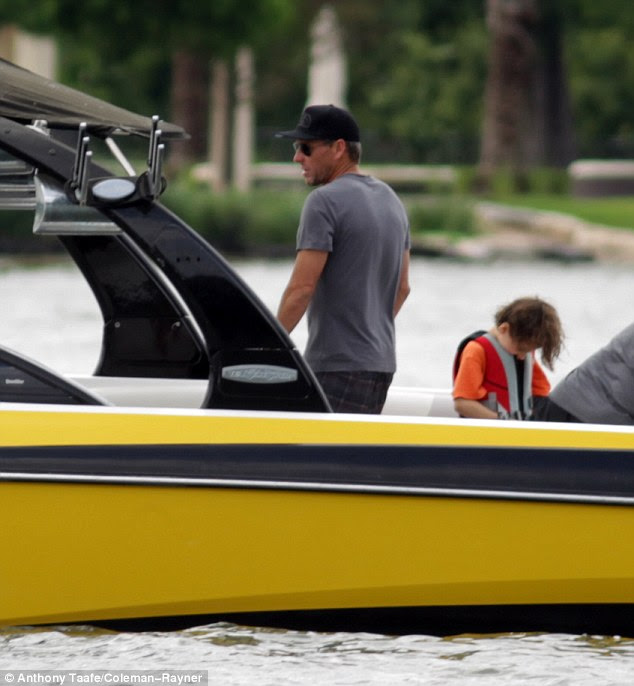 The U.S. Postal Service gave Armstrong and his cycling team $30million in sponsorship money during his Tour de France bids
Armstrong's three oldest children with ex-wife Kristen Richards also came along for the cruise. Twin daughters Grace and Isabella, 13, couldn't take their eyes away from their phones as they walked to the boat, while son Luke, 15, got in some bonding time while helping dad carry supplies.
The family trip comes just two days after federal government attorneys filed a request to have Hansen subpoenaed for her part in conspiring to cover up her boyfriend's car accident in December.
On December 27, Armstrong hit two parked vehicles in a high-end neighborhood in Aspen, Colorado and then fled the scene.
Lance Armstrong on beach with Anna Hansen in Miami (archive) 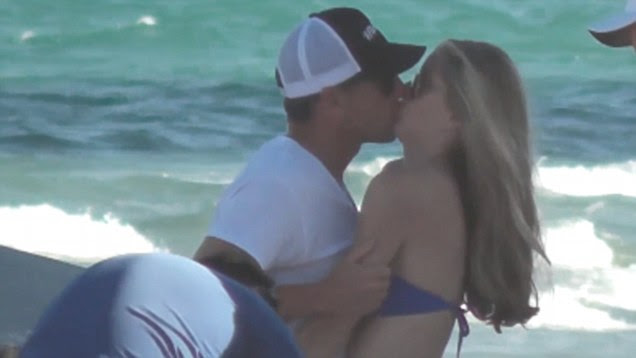 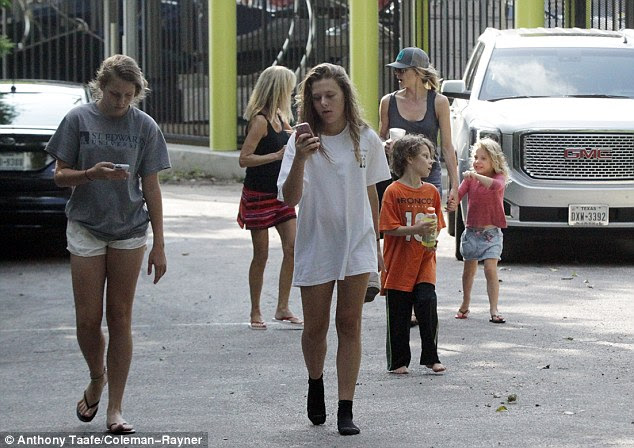 All five of Armstrong's children came out on the water on Sunday. Hansen pictured in a hat, holding the hand of their daughter Olivia, 4, behind their son Max, 5, while Armstrong's oldest daughters with ex-wife Kristen Richards (13-year-old twins Grace and Isabelle) stare intently at their phones in the lead 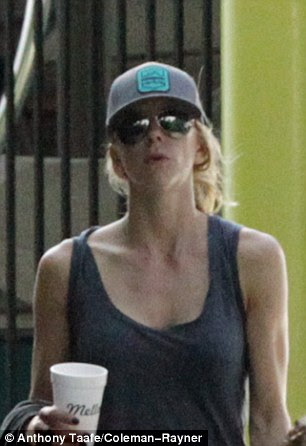 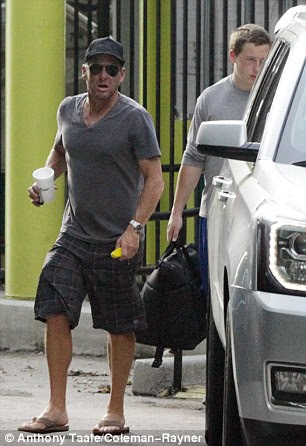 After admitting to doping in 2013, Armstrong was stripped of all seven of his back-to-back Tour de France wins. Hansen on the left
Hansen initially took the blame for the accident, but then Armstrong later confessed that they conspired to cover-up the fact that he was driving since he had done a 'little bit' of drinking before the fender-bender. He pleaded guilty and paid a fine of $150 and nearly $240 in court fees.
Feds want Hansen's testimony in order to further prove their point that he is an 'unreliable source of information'.  The U.S. Postal Service is currently suing Armstrong for nearly $100million dollars, claiming he defrauded the agency by accepting $30million in sponsorship money for his cycling team.
'Armstrong's admissions have been far from extensive,' the government wrote. 'On the contrary, Armstrong has carefully selected both the media outlets that would receive his "admissions" and the scope of these admissions.
'Armstrong's active management of his confessional process has allowed him to continue to hide essential facts about the extent of his doping, who helped him to dope, where the drugs came from, and how he managed to cover up his activities for so long.'
If the Postal Service wins the civil suit, Armstrong will have to turn over nearly four-fifths of his estimated $125milllion fortune.
The issue of defrauding the government revolves around Armstrong's confession to doping, which he made in a 2013 interview with Oprah Winfrey.
Armstrong had long been the center of steroid rumors, but only admitted to doping in 2013, after he had retired from cycling. 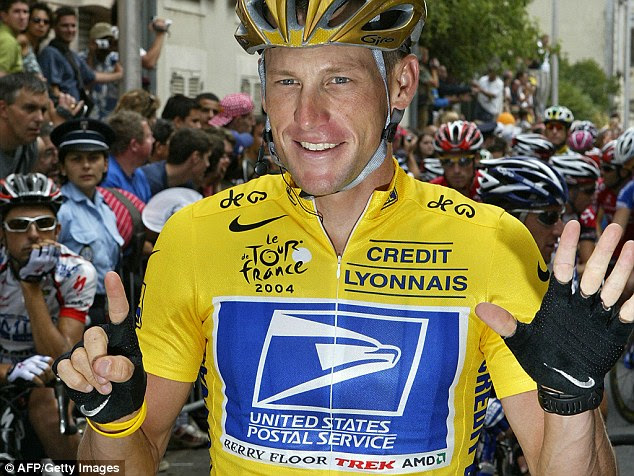 Armstrong pictured above in 2004, winning his sixth Tour de France under the sponsorship of the U.S. Postal Service
Since then, Armstrong has been stripped of every one of this seven straight Tour de France wins.
Armstrong's lawyers' main defence against he Postal Service claim is that they were not actually harmed by his doping admission - and instead benefited greatly during his years as Tour de France champion.
The case was originally sparked by one of Armstrong's former teammates Floyd Landis, who could get more than $20million for acting as a whistleblower.
Peter Hyatt as Statement Analysis Blog at 7:24 AM

He doesn't even appear to be ashamed.

Still, despite the lawsuit, he has also not received the same amount of flack as Paula Dean did for saying a slur.

This world we live in...

The other interesting thing about Lance, having had cancer..I recall many comments, myself included where we were shocked that someone so healthy would get cancer.

I now wonder I there is a connection to his drug use.

That is a seriously awkward kiss in that photo. Terrible body language.

TrustmeIgetit; Paula Deen did a lot more than make a racial slur. She ran her lucrative business off the backs of poor hard-working southern black people; one in particular, although there were others as well.

Paula's black-woman cook worked 50-60+ hours a week, AND MORE, for years; running as hard and fast as she could cranking out those wonderful soul food dishes, only to never be recognized for her hard work OR paid properly for her many overtime hours.

The worst of it is, that many of those recipes Paula claimed were hers, came from the black woman and her black ethnic soul-food cooking from HER childhood. Until Paula got hit for her "one?" racial slur, no one ever knew anything about the poor black woman who worked harder than any human being ever ought be allowed too, but had to take a back seat to Paula when she should have been well compensated AND given a large percentage of Paula's business.

To enlighten you; Paula was not the one who came up with many of the recipes she used, sold and claimed were hers, it was her black cook who deserved the credit for their successes AND compensation for them, and NOT Paula Deen.

Paula didn't even have the decency to give credit to her black-mammy-cook on a single one of her tv shows either. ha ha.... I hope her come-up pence cost her more than it would have cost her to treat this poor woman fairly, which she never did. So there; you have the rest of the story...