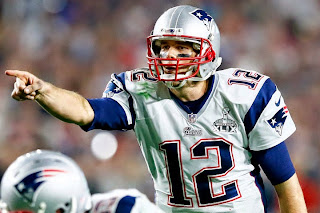 "I didn't deflate the footballs.  I didn't know that he was deflating them. "

That would be the easy way.

Instead, Tom Brady's lawyers and the New England Patriots have changed their minds about accepting the punishment and have issued a 20,000 word rebuttal.

The accusation was short.  It stated that not only did they find that Brady and an employee deflated the footballs to Brady's specification, but they found that Tom Brady did not cooperate in the investigation to the point where he refused to allow them to see his cell phone text messages.

Thus, it was the right of the NFL to suspend him for it.  He and his attorneys knew that they could not hand over the text messages, but the NFL said that not only did Brady do it, but Brady hindered their work in order to cover up the cheating.

He said, "I don't think I'm a cheater" and had what appeared to be a good time in the spotlight, dancing around questions, using tangents and laughing a lot.

He is a top shelf athlete who knows precisely what football pressure works best for him, in exactly what temperature, humidity and wind speed combined.  He is a master craftsman at making that ball spiral just right, so it will land, with geometrical precision, where he wants it to, earning for himself millions and millions of dollars.

The 20,000 word rebuttal includes the claim that de-flating was about weight loss.

The average person without Statement Analysis training recognizes that  if a denial can be made with just 5 words, the monumental novel written by attorneys doesn't "feel right" to them.

It reminds me of some of the more comical elements in analysis:

*The employee who calls out sick who gives a lengthy detailed medical history.  At some point, the supervisor gets the hint:  he ain't sick.

He did finally say "I didn't know about it" surrounded with more than 45 minutes of words, negating the principle of the Reliable Denial.  It was a long, rambling attempt to persuade that violated the simple, 3 component denial.

*"Did you smoke pot on shift?"

"Me, smoke pot on my shift?  Are you kidding me?  Do you even have to ask me?  Let me tell you something.  I work hard.  I love my clients.  My job involves driving them and if you think that I would endanger their lives by driving under the influence of marijuana, then I don't know if I can continue working here!"

Yes, I got that speech once.  It was a wonderful sermon and it went on and on and on.

The next day, he confessed.

Tom Brady's press conference was very long, goofy, and showed that, yes, he did have the footballs deflated to his prescribed level.

OJ Simpson gave us some great quotes to use, particularly from his book.

Did you ever read the book?

I didn't think so.

I have not met anyone who read it, outside of exerts online (like me) or perusing it at Barnes and Nobles (like me) or getting the quotes from another analyst (like me).

It is a long book that goes far out of its way to avoid saying "I didn't do it" in the simple format we have come to look for.

I confess that I did read more of Patsy Ramsey's book, but that was only because I was studying the methods of deception used, whether by her, or the one she may have dictated her story to.

My guess is that no one here is going to read the 20,000 words in the appeal outside of the lawyers for the NFL and the commissioner's office; charged with the task of attempting to keep the game honest from cheating.