Tweets Warn of Attack in Texas

In Statement Analysis, we view the speed of transmission of words in open statements as an indicator of reliability, but even in written statements we learn:

What we believe, we do.

Now, after the Free Speech dedicated cartoon contest in Texas, in which Free Speech advocates sought to highlight how no group nor organization can or should be allowed to bully Americans out of free speech, ISIS has claimed responsibility for the shooting, promising even greater attacks on US soil.

There are various means of fascism, that is, the bullying of opinion and eventually law, upon others.  With terrorism, the silencing of opposition is a strong and initial technique of deception, by opening the door for propaganda.

The Twin Towers were destroyed by those who quoted the Koran and were in abject obedience to its words.  George W. Bush stood among the ruins and said, "Terrorists have hijacked a peaceful religion."

This was not simply to ignore history, but to ignore the explicit and plain teaching of the Koran. In other words, it is to ignore the source of the rage that killed so many.  It is deception and it has its cost.

In Europe, criticism of the Koran is called "Islamophobia", which is viewed in light of a crime, not a mental illness to be treated.  This silencing of opposition is precisely what the terrorists thrive upon.

When one points out, as happened last week, when a gay man was stoned to death (pictures published world wide via the internet) if one quotes the Koran's teaching to show the reason this man was murdered, they are "racists", even though no "race" of people is identified. 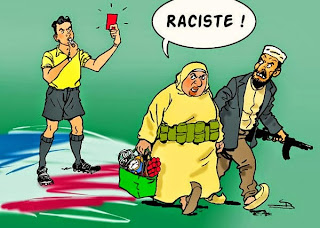 We do what we believe.  Our words reveal what we believe.  Yet, when women are assaulted in the instruction of the Koran, it is those who point out this direct teaching who are condemned, not the misogynists who carry out the assaults.

Willful self deception equals tragedy that could have been avoided.

From Jihadwatch.org     Note the quotes are highlighted.

UPDATE:  The FBI, unofficially, responded by saying that they are overwhelmed with the number of "jihadists" in the United States and are understaffed in following them all.

They had Elton Simpson on their radar for years. But it is FBI policy in the Obama Administration not to acknowledge, much less study, the beliefs that motivate such attacks. The FBI training materials, by order of John Brennan and Barack Obama, do not mention Islam and jihad in connection with terrorism. So how can the FBI distinguish between those who are genuine threats and those who are not? They can’t, because such questions will turn on matters involving their Islamic piety — which is off limits for investigation.
“Mohammed Contest Attack an ISIS First in the US,” by Charlene Aaron, CBN News, May 5, 2015:

ISIS says it was behind the attack outside a contest in Texas featuring cartoons of Islam’s prophet Mohammed. It is the first time the group claimed to have carried out an attack inside the United States.
Meanwhile, the FBI is under increased scrutiny for failing to prevent Sunday’s attack after it had closely monitored one of the suspects in the shooting.
Federal agents had been monitoring 30-year-old Elton Simpson for possible terrorist ties for more than a decade.
Simpson and his roommate were shot dead after opening fire on a security guard outside the event.
In the past, FBI agents recorded Simpson talking about fighting “non-believers” for Allah and about plans to travel to Africa to link up with Islamist brothers in Somalia.
Five years ago, he was arrested for attempting to join an al Qaeda-affiliated group there.
Years spent investigating Simpson for terrorism ties resulted in three years of probation, placement on the no-fly list, and $600 in fines and court fees.
His attorney says he became increasingly agitated.

“I mean, I know that some of the statements that he made were, ‘If you die on the battlefield’ than you get, you know, whatever, the wives and things like that, but I think you hear that out of a lot of people. I mean, that’s a belief of the Muslim faith,” Kristina Sitton, Simpson’s attorney, said in 2011.

Simpson recently posted messages on Twitter about his dismay with his country.

Just minutes before Sunday’s shooting, he tweeted that he and a brother had pledged loyalty to ISIS.

“May Allah accept us as mujahideen [jihadists],” he wrote.
Though the FBI was aware of his social media rants, he was not under 24-hour surveillance.

Lance Armstrong's girlfriend will be questioned about his tendency to lie, it has been reported.

The disgraced cyclist has apologized for letting long-term partner Anna Hansen take the blame for a car collision in Aspen last December.

But as the U.S. government pursues a civil lawsuit against Armstrong, prosecutors have issued a subpoena to interview Hansen, mother of Armstrong's two young children, USA Today reports.

Armstrong's lawyers are fighting for the subpoena to be dismissed on the grounds that Hansen is not connected to the case.

However, in court documents read by USA Today, the government states Hansen could provide vital information about 'Armstrong's character for untruthfulness'.

Further defending the court order, the government report states: 'Hansen has been in a relationship with Armstrong since 2008 and, during the period of their relationship, Armstrong engaged in conduct that is unambiguously relevant to this litigation — most notably, his attempts to silence anyone who knew about his doping.'

It adds: 'Hansen's suggestion that she "knows nothing" related to Armstrong's doping and concealment is implausible.'

Lance Armstrong's attorney has yet to respond to Daily Mail Online's request for a comment.

The 43-year-old disgraced professional cyclist avoided a court appearance by paying $238.50 in fines and court costs by mail.

According to reports, Hansen told witnesses at the scene that it was Armstrong, but when police came to their house she claimed to have been driving because Armstrong had been drinking 'a little bit'.

When the officers questioned the valet, who testified to seeing Armstrong get in the driver's seat, Hansen recanted her statement, allegedly admitting that they did so to prevent the story from hitting the news.

Now, she is set to face a courtroom.

The government prosecutors used part of an interview with Tyler Hamilton, Armstrong's former teammate, to defend their subpoena.

The excerpt quoted in their report, read by USA Today, says: 'Hansen has been in a relationship with Armstrong since 2008 and, during the period of their relationship, Armstrong engaged in conduct that is unambiguously relevant to this litigation — most notably, his attempts to silence anyone who knew about his doping,' government attorneys stated.

he threw her under the bus.

"UPDATE: The FBI, unofficially, responded by saying that they are overwhelmed with the number of "jihadists" in the United States and are understaffed in following them all. "

That is horrifying. Goose bumps.
I worked at WTC2, 103rd floor for AON.
I left a while before my former coworkers and bosses were murdered.
The girl who worked my job died.
So suffice it to say, Islam's War on Freedom is always at the back of my mind.
It just makes me p!ssed that most people in America don't care. Or if they do they feel helpless and concentrate on stupid things.
I am so worried for Pamela Geller.
I live in Maryland on the DC border.
In a diversity filled neighborhood.
Everything is chill here. Except for the gaggle of Islamics living in a house to the right of the house across the street.
No smiles, no waves for the 3 years I 've been living here.
Yet the women will stand out on their lawn cackling together and if I look in their direction, look down or away from me.
The little girls are completely covered even while baking in the Summertime.
It's not healthy, it's not positive.
I understand most people like privacy, I understand we tend to be comfortable around our "own people", but Islam wants to exist and smite out everyone else.
I wish that more people understood what's in the Koran.
A book that sanctions lying.
There are wild tales in the Bible, but there is nothing that instructs or condones lying.
Just googling "koran sanctions lying" I have turned up new proof.
And thanks for this blog, Peter. Although I end up leaving it angrier/sadder/sobered, it's fascinating to read.

OT: Are either of these answers acceptable denials?

B. No, I did not molest my ch, grandson.

A is unacceptable because it is not a complete denial so there would need to be more questions.

But is B unacceptable without knowing the responder's definition of molestation? What of the use of the word "grandson," particularly if there was more than one grandchild he was accused of molesting. He stopped short of saying "child or children."