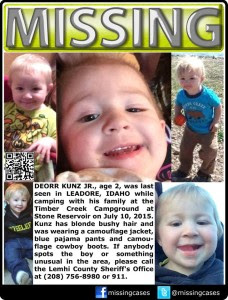 A false report that DeOrr Kunz jr, the missing Idaho toddler, circulated a news room when a reporter sought confirmation and called the father.

“DeOrr, is it true? Has your son been found in Minnesota?”

“I have no idea what you’re talking about.”

The question was, "DeOrr, is it true?  Has your son been found in Minnesota?" posed to the father of a missing toddler.  The writer added that there was a long pause before the father answered.  The pause indicates a need to think, rather than react, making this question, specifically, sensitive to the father.

Ask yourself, if possible to put yourself in his shoes, what might you respond to such a question?

This is an exercise in Statement Analysis of "the expected" and it is done by presuming innocence within a parent.  Therefore,

If your toddler was missing, and you had no guilty knowledge of what happened to him, and you received this phone call and question, what would your response, or the typical innocent response sound like?

First note that the author of the article said that there was a long pause. This is to indicate that the question, "Has your son been found in Minnesota?" is sensitive to him.

Would you, as father waiting for news, jump at the question with, "What?  Really?? This is wonderful!" as your reaction?

Expected:  Rush of emotion, excitement, joy, questioning, 'where, when, how is he?' and so on.

The father's reaction is not expected and may cause some to consider that the father may consider the notion of his son being found in another state to be not possible.
Peter Hyatt as Statement Analysis Blog at 9:21 AM

I'm not surprised. He showed guilty knowledge in his language.

The parents aren't guilty. They have inside knowledge that law enforcement has asked them not to reveal. Get real people.

I believe the reporter identified himself before posing the question, therefore leaving no reason why the father would think it was a cruel joke of some sort.
It seems to me that the parents have more information than they have shared and I do not think the FBI is saying much to them. The grandmother stated in Social Media that since the FBI reached, everything has been very quiet.

"They have inside knowledge that law enforcement has asked them not to reveal."

That, and saying "This is what he would have said" with any degree of certainty is about as scientific as those psychics you guys rag on.

First note that the author of the article said that there was a long pause. This is to indicate that the question, "Has your son been found in Minnesota?" is sensitive to him.


What constitutes a "long pause" to the author? 1, 2 seconds, 5, what? We also have to bear in mind the shock of receiving such a call, processing what is being relayed .

My reaction would be something like this "who the f88k are you. What are you saying, has my son been found? Where is he? Who are you? Tell me where he is, tell me now, and so on.

I wouldn't read to much into the pause as yet, until we know how long the "pause" was?

"What? Really?? This is wonderful!"

This is a response to "Your son has been found in Minnesota."

The question the reporter asks is "Is it true? Has your son been found in Minnesota?" He's asking for confirmation of the rumor. If Deorr Sr hasn't heard the rumor, replying that he doesn't know the answer would be expected.

Was that the extent of the call? What came after the one sentence reported? Did the second sentence show an interest in learning more information?

And in what universe would the question not be sensitive?

And in what universe would the question not be sensitive?

When people receive unexpected information/news that is beyond what we can process (this is unique i agree) good or bad we become tongue tied (i do anyway). My brain is trying to process what is happening and my words as i'm trying to express myself become garbled. The brain wants to speak fast and send words for me to say, and send the words in double time to the mouth. This then, becomes mixed and incomprehensible, (not always) sentences running in to each other, wanting to say everything at once.

The phrase "stunned silence" ("the pause") comes to mind.

I see absolutely no reason for a pause,period. My first reaction would be who are you,where did you hear that? Then I'd get his name and number and call LE immediately.

Personally I don't believe the father is telling the truth about his trip down the mountain to get a signal on his cell.

Marv, what I posted was fact. I am not psychic.

I find it intriguing that Dad's reaction statement was a complete, grammatically correct sentence without any of the malapropisms or "verbal dyslexia" common in his previous utterances.

"Marv, what I posted was fact. I am not psychic."

Sorry for not being clear that I agreed with you, Anon. Let me try again:

Anon: "They have inside knowledge that law enforcement has asked them not to reveal."

Me: I agree with that statement anon and will also point out that guessing what dad's response should be with any degree of certainty is more akin to making psychic predictions than it is to scientific analysis.

Then are you disagreeing with Peter Hyatt's analysis? (I am a different Anonymous.)

Peter said: "The father's reaction is not expected and may cause some to consider that the father may consider the notion of his son being found in another state to be not possible."

How convinced do you think he is?

"Has your son been found in Minnesota?" is sensitive to him.

I believe Dad knows his son could not have been found in MN, because he knows exactly where he is.

First, I'm the one that brought up dyslexia. I have no idea if Deorr sr is dyslexic. None. I simply noticed how he substituted senseless words like either where he likely meant even, and replica for genuine. Another reader pointed out it's called apraxia.

As for the pause, it's unexpected and suggests to me Deorr sr knows his son was not in Minnesota.

The silence in this case is baffling. I expect parents of a missing child to reach out. I'm suspicious when they do not. But in this case, we have a sheriff who for the most part refuses to speak.

The sheriff does say he's convinced Little Deorr was not abducted. That leaves the person or persons at camp as persons of interest. It took over a week to release the name of the friend. Ggp name has not been officially released. Deputies even addressed social media and said it was hindering the investigation. How can that be? They are definitely withholding something.

Was the quote accurately transcribed from a recording?

My reaction to my missing loved one being found (possibly) would be to ask where exactly and to thank God. Id also be yelling the information out to any of my family that were around. I'm kinda high-strung so I doubt id pause before flipping out and asking (demanding) answers from the caller.

If the reporter opened the call with, "This is ________. DeOrr, is it true...?", then a pause might be expected. The father might not believe a reporter is likely to bring good news or that a reporter has good intentions. He may not have really listened to the first part of the call and his brain is working to decode the words a second after they've been uttered. The father has expressed (excessive?) praise for SAR and law enforcement, which may indicate that he would expect LE to contact him first, and anything said by a reporter would not be true/accurate.

At any place in this question, I think I would have, in the least said, "What? What did you just say?"


It is the long pause that fascinates me, however.

Did he hear him?

What caused him to show a need to pause?

LEADORE, Idaho -
Lemhi County Sheriff's Office has been assisted by the FBI over the past month to find Deorr Kunz Jr.

Dogs, divers, on foot searchers, drones and a heat seeking helicopter are just a few of the resources being used in this search.

There have been efforts to bring in another volunteer search, but locals in Leadore believe search time needs to be spent somewhere else.

Rebecca Cox, owner of The Silver Dollar Bar and Cafe, said, "I don't think he's up there." "It's so rural up there and the drive up there. No one would be going up there to look for a kid to kidnap. They just wouldn't drive up. You wouldn't want to go up there. The road is horrible."
http://m.localnews8.com/news/onemonth-mark-of-the-search-for-deorr-kunz-jr/34638970

That's how I think I would respond as well. Sometimes info can leak to the media and it may not be relayed by LE until they get confirmation.

In fact I watched one of those real life mysteries today. The missing moms father was contacted by media about a body that was found. They said the woman had been found but LE had not been able to confirm anything at that point since the body was only bones. They had to wait did DNA.

The pause us still concerning. And the fact he didn't ask questions is what bugs me, I would think they knew something I didn't and would be asking for more.

I wouldn't discredit it if I thought my child was possibly kidnapped this soon after.

My response to that question would be "is he ok????"

What I was wondering was if he had received a lot of crank calls....telling him that Deorr had been found...and maybe LE told him to just hang up and report to them...or to respond how he did...that's what the long pause made me think.

Has your son been found in MN requires a "yes" or "no" answer. While he did give an answer he did not state "yes" or "no." Therefore, he has not answered the specific question. His resistance in answering the specific question could mean he is withholding information. Coupled with a pause he would have been able to process the question and give a specific answer. Yet he paused and did not specifically answer the question nor did he ask any questions. He paused then made a statement. Why the pause?

How can one answer "yes" or "no" to a yes-no question they don't know the answer to? If Deorr Sr. had not heard the rumor about his son being found in Minnesota he could not honestly answer yes or no. If he isn't privy to the information, how can he be "withholding" the information?

The long pause IMO was Daddy very quickly in his mind shuffling the following, "what? how could that be? It must be a trick. I know he's not there, what do I say so as not to give myself away? How'd the body get to Minnesota? IS he somehow in Minnesota? And then he says a completely SAFE answer that cannot be used against him "I have no idea what you are talking about" That was the only answer he could give to not "let on" any info. It is certainly not expected at all.

He wasn't asked if he knew about or if he had heard about a rumor. He was asked has your son been found in MN. The answer is in his knowledge. No I do not know that to be true or yes that is true. I don't believe he was withholding that specific info I believe based on a pause and his answer he is likely withholding something. He also could have answered no followed by a variety of questions.