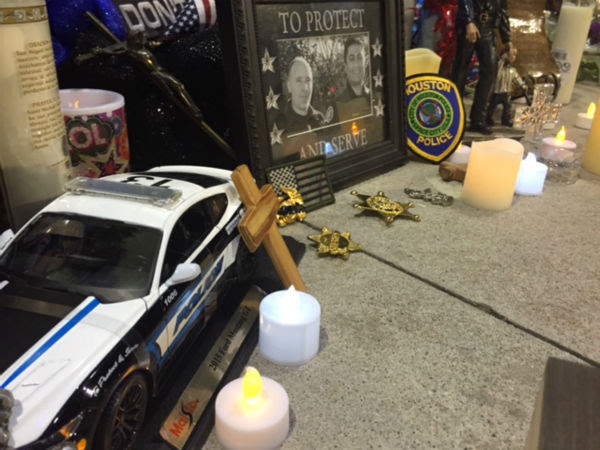 Here is the plain spoken sheriff, Ron Hickman, on the murder of Darren Goforth, married father of two, murdered while filling his patrol car with gasoline.

We have not heard from the president on whether police lives matter.

A suspect is in custody, charged in Friday night's shooting death of a Harris County deputy.
At a press conference Saturday afternoon, Harris County Sheriff Ron Hickman announced that Shannon J. Miles, 30, a person who had been in custody since early Saturday morning, is charged with capital murder.
Miles is accused of killing Deputy Darren Goforth, 47, in northwest Harris County. Investigators say Deputy Goforth had worked an accident scene at around 8:30pm, then went to a gas station on Telge and West Road. As he was pumping gas, detectives say Miles approached Deputy Goforth from behind, said nothing and fired multiple shots. Once he fell to the ground, authorities say Miles fired more shots at the deputy. Deputy Goforth was pronounced dead at the scene.


Harris County District Attorney Devon Anderson said the criticism of police had gotten out of hand.
"It is time for the silent majority in this country to support law enforcement," she told reporters at a news conference. "There are a few bad apples in every profession, that does not mean there should be open warfare on law enforcement." 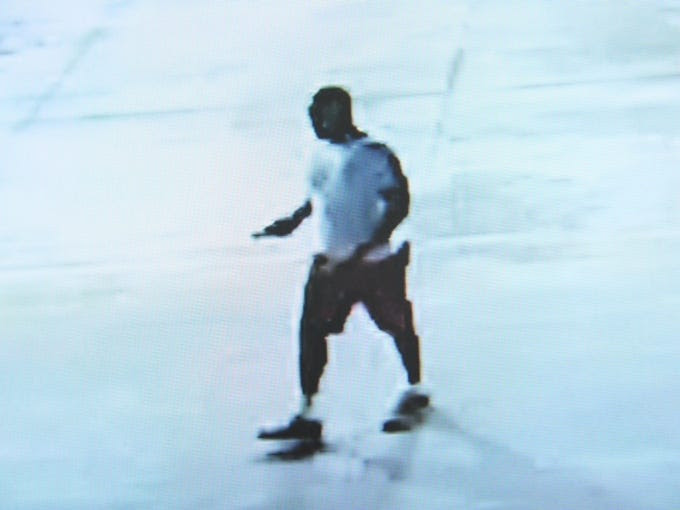 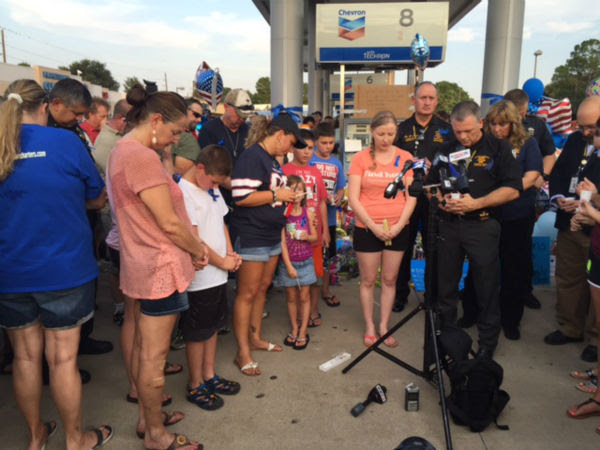 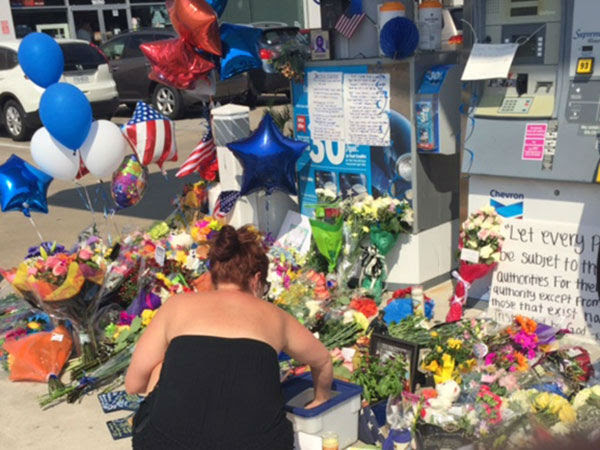 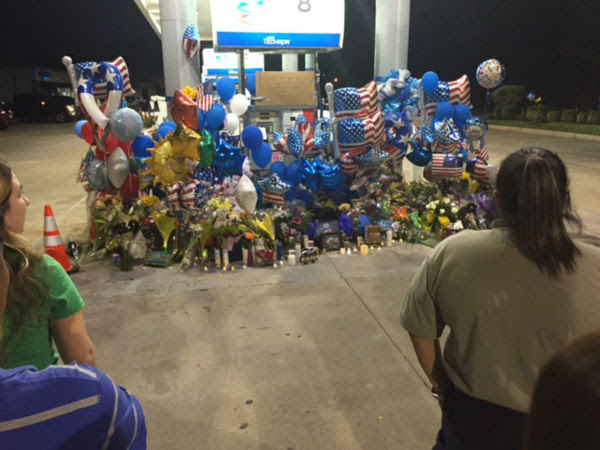 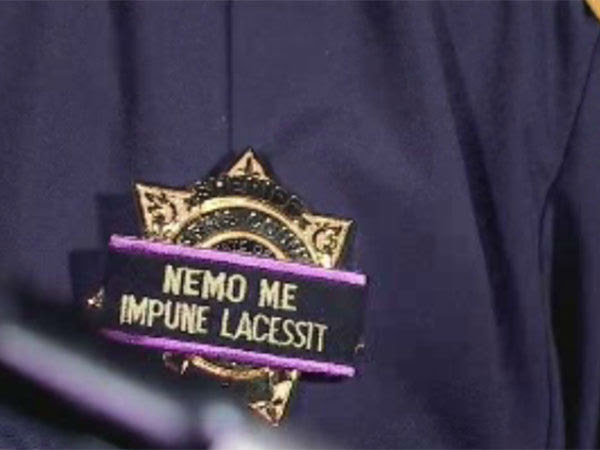 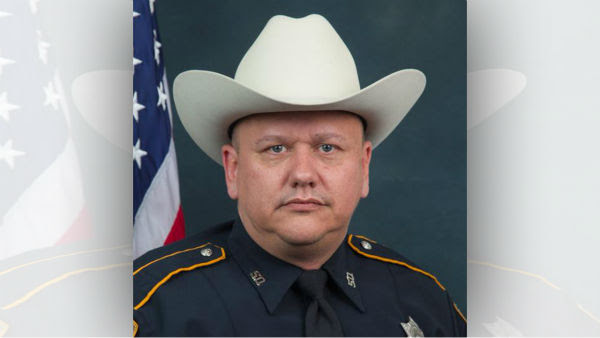 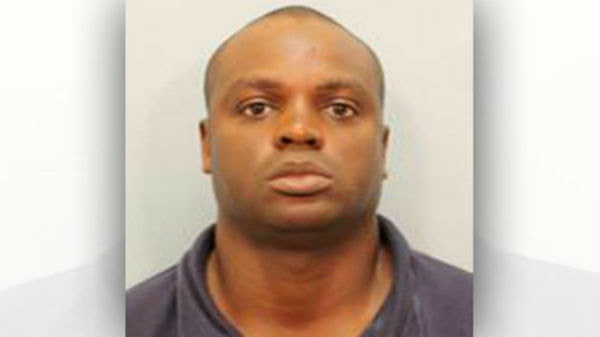 Many gathered at the gas station where the deputy was murdered for a prayer vigil.
"I am proud of the men and women that have worked swiftly to apprehend the responsible person who posed a significant threat to both law enforcement and the community at large," Hickman said. "Our deputies return to the streets tonight to hold a delicate peace that was shattered last evening."Hickman said the motive for the killing had not been determined but investigators would look at whether Miles, who is black, was motivated by anger over recent killings elsewhere of black men by police that have spawned the "Black Lives Matter" protest movement. Officials say Deputy Goforth had no previous interaction with Miles."I think that's something that we have to keep an eye on," Hickman said. "The general climate of that kind of rhetoric can be influential on people to do things like this. We're still searching to find out if that's actually a motive."Earlier on Saturday, Hickman had called the killing a "cold-blooded assassination.""Cops' lives matter, too," Hickman said then. "So why don't we drop the qualifier and say lives matter."The press conference to announce charges against Miles was the second of the afternoon. In the first, Hickman, along with other county officials, issued a plea to the public for anyone who knows anything about the fatal shooting of Deputy Goforth to come forward. Asked at the second press conference why he asked for the public's help if he already had someone in custody, Hickman said he had to be sure."We always want to make sure we leave no stone unturned because people who were at the scene who we have not talked to yet may have more details to help solidify our case," He said.Miles has a criminal history that includes Resisting arrest, trespassing, evading detention and disorderly conduct with a firearm.
Peter Hyatt as Statement Analysis Blog at 9:42 AM

The Indianapolis father of a three-month-old girl missing since May has been arrested and charged in the baby's presumed death.

Jeffrey Fairbanks was charged Thursday after he told police he put a pillow over the baby's face to muffle her crying, according to the probable cause affidavit. Police say Fairbanks told them he placed her body in a dumpster, reports WISH-TV.

He'd previously told police he'd buried her in a cornfield with a cross for a grave marker. Asked why he made that up, Fairbanks said 'the truth is pretty ugly.'

In June, Fairbanks appeared on WTHR, when he insisted he was not to blame for Janna's death.

'I picked her up and she was totally lifeless and I couldn't figure out why,' Fairbanks said.

The 45-year-old Fairbanks is being held in a Marion County Jail.

Shortly after Janna Rivera was reported missing May 29, authorities said detectives investigating the girl's disappearance 'do not believe this to be a random act.'

Authorities searched a wide radius around the baby's Indianapolis home after she was reported missing May 28. They also searched a landfill, but nothing was found.

Janna's mother, Yolanda Rivera-Gonzalez, now has a restraining order against Fairbanks. However, she told police during the investigation that she didn't immediately report the disappearance of her baby because she was afraid of Fairbanks, who reportedly has a history of domestic violence.

Authorities interviewed the other children in the home, who told them Fairbanks was drunk on vodka the day Janna disappeared.

Rivera-Gonzalez was at work when one of the baby's older siblings said Fairbanks left the home with Janna wrapped in a blanket with her eyes closed.

A daughter in the home told police that Fairbanks 'usually slaps [Janna] in the mouth to shut up' and screamed at her when she cried.

The children also told police that Fairbanks had, on at least two other occasions, placed blankets or pillows over Janna's face to muffle her crying.

Fairbanks is charged with murder and neglect of a dependent resulting in death. He's since pleaded not guilty.

His next day in court is October 21

This was the truly vile act of an animal. Black, White, Green, an animal nonetheless. I LOVE that the chief stated, "Lets drop the qualifier"..excellent. Although I'm sure the majority of people will just forget about that with the what seems to be a majority of the "It's them against us" mentality that pervades this nation.

Off topic
Aug 28, 2015 Statement from Josh Duggar, "While espousing faith and family values, I have secretly over the last several years been viewing pornography on the internet and this became a secret addiction and I became unfaithful to my wife,” he wrote. “I am so ashamed of the double life that I have been living and am grieved for the hurt, pain and disgrace my sin has caused my wife and family, and most of all Jesus and all those who profess faith in Him.”"

I think this apology may be a case of "Sorry, not sorry."

"Been viewing pornography," seems to minimize the behavior as the verb choice "viewing" is so neutral. Since he is supposed to be apologizing, though, it seems strange to see right away he has not chosen a value-laden verb. "I became unfaithful to my wife" is a strange set of word choices. Not I was unfaithful or I am unfaithful. Does "became unfaithful" serve an indication that he is still not accepting responsibility? Also, he drop a pronoun, "and am grieved." Is he minimizing himself from responsibility here?

Idk, but he uses a bunch of help verbs throughout, "have secretly," "have been living," "has caused." It seems like he tries to say an apology (because it is expected of him), but in his mind he doesn't believe he has a reason to apologize.

Hickman asked, "So why don't we drop the qualifier and say lives matter?"

I would compare this to suggesting we change the old slogan, "Start seeing motorcycles" to -- "Start seeing all vehicles on the road."

Clearing the record on the McCollom case


When a case is pending I am very limited in what I can discuss about that case. If you think about it, that’s a pretty good rule.

We want jurors deciding a case based upon the evidence they hear in court and not what they read in the papers or see on TV.

Now that the case against former Peachtree City Police Chief William McCollom has ended, I think it is important to clear the record about some matters.

I didn’t really know Chief McCollom. He came to the police department to serve as assistant chief and we didn’t have an opportunity to interact in that capacity. He had only been chief a few months before the tragic night when his ex-wife was injured. I had talked with him once by telephone while he was chief, but we had never met in person.

If I had developed a relationship with him, I would have asked a district attorney from another circuit to handle the case. As it happened, I felt no conflict whatsoever and felt it was my responsibility to make the decisions that prosecutors make in such matters.

I didn’t have to ask for the assistance of the GBI. The Peachtree City Police had already invited them to investigate before I knew about the shooting. That was exactly the right decision by the department. It was critical for an unbiased agency to review this incident and the GBI is the proper agency for that job. They do this all the time.

I was very impressed by the Peachtree City officers during the entire case. It must have been an incredibly difficult time for them. Those men and women handled the stress and uncertainty of those times with admirable professionalism. They continued to protect the citizens of their city as if nothing had happened.

Chief McCollom cooperated fully with the investigation. He did everything asked of him, even when it must have been very emotionally painful for him to do so.

Maggie McCollom is an angel. For weeks I feared that she would die. At the same time I prayed that she would walk. Those prayers have not yet been answered and doctors seem to believe that she will forever be paralyzed from the waist down. I hope they are wrong.

Maggie and William remain together, though they are not married. They moved to Florida. If Maggie had her way, we would not have pursued any charges against William—she is convinced that the shooting was accidental.

The evidence supports that conclusion. All of it. There is no way that I would ever be able to prove otherwise. Any criminal charge that required me to prove that he intentionally shot her would be a waste of time.

That only left two options. Bring no charges. Or, charge the misdemeanor offense of reckless conduct. The grand jury and I chose the misdemeanor. A person violates that law if he “causes bodily harm to…another person by consciously disregarding a substantial and unjustifiable risk that his act or omission will cause harm or endanger the safety of the other person and the disregard constitutes a gross deviation from the standard of care which a reasonable person would exercise in the situation.”

The grand jury and I felt that when he got into bed with another person with a loaded gun after ingesting alcohol and sleep medication, he violated this law. And we felt that he should be charged despite a life of service in law enforcement.

And I’m left with an empty feeling. It seems so inadequate. It makes nothing better.

But, I’m certain that we did what the law requires. He didn’t commit a felony. We didn’t charge him with one. He broke a misdemeanor law and he has pled guilty to it.

I wish the criminal justice system could always make things better. But, for this particular tragedy we’ll have to accept that it only did the best it could.

Scott Ballard is District Attorney for the Griffin Judicial Circuit, which consists of Fayette, Pike, Spalding and Upson counties.

This man is brave to say what he did, knowing that he has brought a lightning rod of possible trouble, from the White House, towards himself.

Obama is very thin skinned and people fear his retribution. Many in law enforcement have reported being threatened by feds, even for upholding immigration laws.

We live in dangerous times.

Here is an update about Obama and Deputy Goforth...

This world just gets crazier and crazier. My heart goes out to this officer's family and friends. ALL LIVES MATTER.