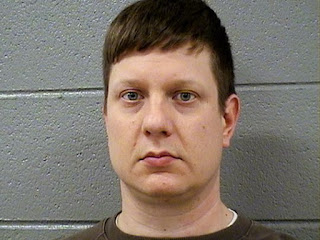 With the recent release of video of the shooting by the Chicago police, we learned that the suspect was shot 16 times. We have one quote for analysis by a police eye witness.  I have highlighted them in italics, with Statement Analysis in bold type.

Here is one statement released in media that was in the official report.  I do not know the author's identity other than that it came from one of the officer's on the scene:

"In defense of his life, Van Dyke backpedaled and fired his handgun at McDonald, to stop the attack.  McDonald fell to the ground but continued to move and continued to grasp the knife, refusing to let go of it."

Please look at this again, and if you have not seen the video, all the better:

"In defense of his life, Van Dyke backpedaled and fired his handgun at McDonald, to stop the attack.  McDonald fell to the ground but continued to move and continued to grasp the knife, refusing to let go of it."

a.  The first thing we notice is the eye witness, instead of reporting what happened, editorialized with "why" something happened.  This is to come in a place where he should be answering the question, "what happened?" instead of "Why?".
This is a very strong indication that the priority of the subject is to justify the action of the shooter, rather than report truthfully.
It not only comes first in the statement, but it answers the question "why?" before the question is posed.

In Statement Analysis, this shows that the eye witness anticipated being asked "why?" and wanted to answer it before it was asked.  It is very sensitive and is to editorialize rather than report.  In analysis, this is given the color coding "blue" as the highest level of sensitivity in analysis.  Please note that when there are more than one 'blue' close to another in a statement, the sensitivity is extreme and this is often the 'place' where deception is found.

b.  Next we note that the eye witness statement tells us why the gun was fired.
This is unnecessary.
Unnecessary words are deemed 'doubly important'.
This shows that the subject, again, is telling us "why" something happened rather than reporting what happened.  He was to state what he saw and then he may be asked his opinion as to why something happened, or he may not be.  By offering it in the open statement, he is signaling an extreme sensitivity about the actual shooting.  These are two "blues" very close together.

c.  Next note that any word that is repeated is important.  He repeated, close together that the victim "continued" to move.  That he "continued" is now sensitive in the language of the eye witness and will, by itself and without a video, lead to asking, "Why is this sensitive?"

This means that in order to grasp a knife, one would have to move, and it is unnecessary, again, making it very important.

It either places the grasping of the knife as secondary in priority or it signals deception.  He either was grasping for the knife, which requires movement, or the subject's language is deceptive, but in either way:

It reveals that the eye witness did not fear the knife being used.  Had he, it would be first.

The emphasis of "moving", is unnecessary.

d.  "Refusing to let go of it" avoids the commitment for truth:  past tense verb.  "He refused to let go of the knife  would be a straight forward past tense event of that which has already taken place and is finalized. This is to violate the formula for linguistic reliability.

Also note that "refusing to let go of it" indicates that the victim must be cognizant of the command to let go of it.  Just this simple addition, itself, would raise questions.

To conclude deception, we must have intent to deceive.

Those who are mistaken and report inaccurately, are not considered "deceptive" because they have no intention of deceiving.

The deceptive are discerned within their need to deceive.

Even where memories may seem to conflict, as perspective enters the langue, Statement Analysis looks for the intention:  does the subject intend to report truthfully, or does he intend to deceive, by withholding or changing the truth?

The eye witness has given enough signals of sensitivity to conclude deception.
Rather than report truthfully, he reveals his motive, as seen in his need to persuade.
Using the basic principle within analysis that highlights the most extreme level of sensitivity we have the two 'blues' close together, making this critical for the subject.

In Analysis, when one answers the question "why?" without being asked, we recognize the anticipation of the question and a need to explain rather than report.

By having it so close together, both word phrases tell us "why", as if is was "because" though the writer was not asked why.

This is a "need to persuade" rather than a truthful account.  It has editorializing to show priority.

The priority is to justify, rather than report.  This need, itself, indicates weakness.  Nothing is more persuasive than the truth.

2.  The order which one speaks tells us of priority and in this, the writer does not reveal a genuine fear of knife attack, as movement came before the more important and potentially threatening 'grasping' for the knife.

4.  Unnecessary words are those in which a sentence is complete without which provide an abundance of information in analysis as they appear unnecessary to us, but to the subject, they are very important.

Oh, right. they're over on one of your 'Davey Blackburn' posts to do that.

Wrong anon. I was just ready to comment.
This is a good reminder to look for the need to give a reason. Rather than simply the account. I have seen other statements, but they were from police who pulled up afterward.

The police union is very strong in Chicago. They are a solid unit with known support from their leaders and mayor. (Until recently when Raum E decided to save his own butt.)

I'm torn about that. In one sense, I understand it's like an army unit where they stand together and know they have the backing of their superiors. I was told first-hand after the videos came out, CPD won't allow what we've seen in Ferguson and Baltimore. "Won't allow."

On the other hand, I understand why people think the police shouldn't be like the military. Policing isn't war. Citizens aren't the enemy.

Then I'm back to...are citizens the enemy now? Especially in a city like Chicago? The rhetoric has built a frenzy that many want to attack anything establishment. The government allows weapons to go freely to anyone. Gangs basically control the South side of Chicago. The Cartel has a real and dangerous presence there, naming Chicago as there US base.

I see what the statement shows. I also see the why behind it. I hope the powers that be see this as one case of murder, as it is. I hope they don't dismantle an entire police force.

Perpetrators of black homicides:
93% by blacks
7% by other races
0.04% by police

You wouldn't think so by reports from the media, or from the BLM movement. Also, consider the police percent include making arrests of suspects in a crime. In other words, police are dealing with a population which increases the likelihood of homicide.

It is ridiculously obvious the eye witness is attempting to deceive. Next!

I would think it should go something like this without seeing the video and based on the statement.

what is his definition of grasp? i'm gonna go with number ten here.
grasp
[grasp, grahsp]
verb (used with object)
1.
to seize and hold by or as if by clasping with the fingers or arms.
2.
to seize upon; hold firmly.
3.
to get hold of mentally; comprehend; understand:
I don't grasp your meaning.
verb (used without object)
4.
to make an attempt to seize, or a motion of seizing, something (usually followed by at or for):
a drowning man grasping at straws; to grasp for an enemy's rifle.
noun
5.
the act of grasping or gripping, as with the hands or arms:
to make a grasp at something.
6.
a hold or grip:
to have a firm grasp of a rope.
7.
one's arms or hands, in embracing or gripping:
He took her in his grasp.
8.
one's power of seizing and holding; reach:
to have a thing within one's grasp.
9.
hold, possession, or mastery:
to wrest power from the grasp of a usurper.
10.
mental hold or capacity; power to understand.

You wouldn't think so by reports from the media, or from the BLM movement. Also, consider the police percent include making arrests of suspects in a crime. In other words, police are dealing with a population which increases the likelihood of homicide.

The stats are reliable. This is more part of the overall deception our media is using in exploitative manner.

Criminals victimize people who are available to them where they live,work and play in general.

The U S justice department just announced an investigation a la ferguson will starting on Chicago Police.

Excellent point, Phoenix. Criminals victimize people who are available to them. Both the stats you posted and I posted attest to that fact.

The stats also show you are highly unlikely to be killed by police.

My point is...which one do you see on the news? Which one is made out to be the largest danger to the black community?

If we are going by the stats, I would certainly choose to work toward what makes my family, my community, and myself the safest. And that's not protesting against police. And it's not crying racism.

Obviously you are not aware of the numerous organizations in black communities trying to quell violence. Just because blacks kill other blacks doesn't mean police can get away with murder.
The police are representatives of the state who are sworn to protect and serve. I assume they are held higher standards than criminals.
Also By your reasoning we shouldn't be too concerned about Isis killing 14 people since thousands of Americans killed by other Americans every year.

No, obviously you did not understand my point.

Which one is made out to be the largest danger to the black community, police or black upon black crime?

The rate of homicides to blacks by police (which includes legit arrests) is at 0.04%. That brings about protests, riots, media interest, black leaders vying for time in front of crowds and your TV, money from philanthropists, celebrities. You get the picture.

Yet, 93% of backs are killed by another black. Some inner city communities are so unsafe children can't sleep in their own homes without fear of a stray bullet killing them. I've given examples on another post. It sickens me that 9 year old in Chicago last year was killed because he didn't know the "right gang territories." That a 14 year old in Peoria couldn't have a slumber party without a gang barging in, guns blaring. (Wrong home.) That in Cincinatti a young black man is more likely to be shot in his highschool than if he were on active duty in Afghanistan.

Now, where's the media? The Black Lives Matter Movement? Your numerous organizations TRYING? Celebrities? Black leaders? They are busy blaming someone who is not the problem. They are deflecting from the true problem. They are crying racism rather than dealing with the hard issues within their communities.

Please note, nowhere in my comments did I say police should not be held accountable for crimes. But the data shows its being blown out of proportion and the black community is suffering more from that than police killings of blacks. That's my point. 0.04% is taking away and deflecting from 93%.

So anticipating "why?" indicates a need to persuade, which makes it an untruthfull/unreliable account. I'm learning a lot here. Thanks.