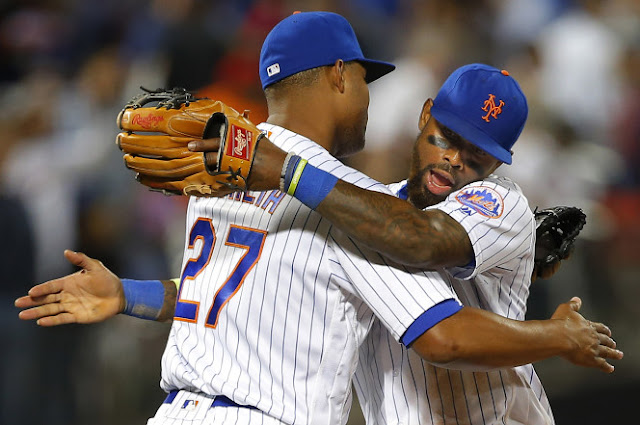 New York Mets pitcher, Jeureys Familia was arrested this week in New Jersey for Domestic Violence.  The report states that the victim is his wife.

Familia speaks broken English as Spanish is his first language.  He made the following statement of denial which was translated by the Spanish radio station he had called into:

“Somebody is trying to damage my reputation with this info. I’m at peace with my family.  Thank God, I’m fine, and with my whole family.”

Statement Analysis is best done in first language.  However, even in second language, we are able to identify major points in language, including:

Does the subject deny the allegation?
What is the subject's priority?
Who is the focus of the statement.
An example of second language analysis can be found through the search feature here, viewing the Nuremberg trials and the statements made by Herman Goering.   We take a more 'distant' view of the statements, rather than a close up, more detailed view, and categorize topics rather than minute points.

“Somebody is trying to damage my reputation with this info. I’m at peace with my family.  Thank God, I’m fine, and with my whole family.”

We first note that he does not deny assaulting his wife.
We next note that his wife is not in the statement.
Then we note his priority:
a.  his reputation
b.  his emotional state
c.  with whom he dwells

a.  Reputation:  "somebody is trying to ruin my reputation."  Since he was arrested, we need to ask, "Who called 911?"  Is this the person he identifies as "someone" (without regard to gender)?
Did his wife call for intervention?
He tells us that the motive for his arrest was to ruin his reputation.  It is interesting to note that Familia is a rather private man who is not often before the camera other than to utter a few words after a game.
His statement assigns blame and the blame is "somebody" and not the subject, himself.
If he did, indeed, assault his wife, the statement would further suggest not only one who is likely to repeat this action, but one who has exercised some form of domestic violence previously, from coercive control to outright violence.
Those who are not classified as "batterers" are those who, in the heat of an argument, struck out physically.  These often show deep remorse and shame, accepting all responsibility, sometimes asking, "how could I have done this?" in a form of shock.
Those who do not take responsibility often are enrolled in "batterer's classes" of some form.  There, they often learn the language used to appease, but from within the personality, there is the patterns of self, competitiveness and poor impulse control.
This is one of the many reasons why "sportsmanship" was taught to young boys where they could celebrate victory, but not humiliate in any form the defeated foe.  Sports even called "foul" upon any "trash talk", "dancing" or anything that showed a lack of human empathy (or "sportsmanship") by the victor.
This is a key element in screening out those who should never carry lethal force in authority who apply for law enforcement positions to obtain 'respect' from the world.  We have specific techniques and questions on how to spot and weed applicants out, for law enforcement within our training.
When the height of competition realizes victory, the release of tension is powerful.  It is at this point where years of training of self restraint or self control keeps the subject from humiliating the humiliated; that is, human empathy.  This can translate to the intense hormonal reaction from a high speed, dangerous chase, where the officer is able to compose himself and refrain from unnecessary aggression towards the captive.
It takes training.
The training is most effective with those who were, during their most formidable years, taught self control and sacrifice.
It takes one violent rogue cop to taint the dedication and sacrifice of  1,000.
b.  Emotion:  he tells us that he, himself, is at peace.  This may suggest a justification for whatever has happened. To have his "peace" disturbed would suggest inner guilt of taking personal responsibility for what happened.
The emotion most dominant in domestic violence is from the victim, who has suffered not only an 'intrusive assault' but an acute betrayal.

This sense of betrayal is called "acute" because when it is unexpected, consider the source:
The woman, literally, opens her body, in the most tender of places, to the man, trusting him, as she does with her intellect and affections.  For this same one to now have contact with her body in a violent, demeaning and harmful way, has not only the elements of physical assault, but also of betrayal.
It is similar, on a lesser scale, to what a child experiences in sexual molestation from a trusted adult:  profound inexplicable betrayal.  This sense of betrayal is so severe, that it may impact the child for the rest of her life.

c.  With Whom He Dwells:  his concern is first his reputation, and secondly, his emotion.  Third is his geography:
"Thank God, I’m fine, and with my whole family.”

Here we have the subject under accusation calling upon Divinity, reaffirming his own status ("I'm fine") and using the word "with" between people, he shows that he has now caused distancing language regarding his family.
Not only is he distant (psychologically and/or geographically--did he have to move out?  was this in reference to being in a jail cell?  Something produced this phrase), but note the emphasis:

Thank God, I’m fine, and with my whole family.”
If he is back in the home and with his wife, this emphasis may explain it yet still showing the persuasive need for emphasis.
It is as to say, "if I am still here with my wife, of course I did not assault her..." without saying it.
Remember:  deceptive people are counting on you to interpret their words.
We do not interpret; we listen.
"Thank God, I'm fine" shows no empathy for the alleged victim.  Had he given a reliable denial and no assault had taken place, concern for him, the falsely accused, is expected. Absence of any denial, however, suggests otherwise.

He invokes Deity (red flag) and continues the selfish theme with the pronoun "I" here.

The subject has not denied the allegation, therefore, we shall not deny it for him.

The investigation should carefully consider that this may not have been his first involvement in domestic violence.

The victim may be under great pressure to retract her statement and deny the allegation.  This pressure may include:

a.  family and friends
b.  monetary
c.  Living locally where baseball fans in the community may view her as "the enemy."
d.  Her own affections towards her husband
e.  Her own instincts to keep her family together.

In one military investigation into a claim of rape by her husband, a woman with a serious medical condition was told by her husband's subordinates what a "great leader" he is.  When this did not dissuade her, they informed her that she would not be covered for her upcoming surgery and follow up care, should he be arrested and courtmartialed.

The pressure upon the victim should always be carefully explored.  Recall the work of Susan Murphy Milano and the realistic approach to planning for the safety of women.

The advocates and/or social workers who may become involved, should carefully consider the usual (denial, etc) but carefully assess the risk to the victim going forward.  The lack of remorse, the lack of personal responsibility and the focus upon self do not bode well for safety.
For training at home, or via seminar, please contact Hyatt Analysis Services for training, ongoing live training, and advanced intense training.

Peter Hyatt as Statement Analysis Blog at 10:42 AM

A judge ordered the calls be released immediately on Monday after months of pressure from more than two dozen media outlets. (Photo: Joe Burbank/Zuma Press)

“I wanna let you know — I’m in Orlando, and I did the shooting,” says Pulse nightclub shooter Omar Mateen in newly released audio of 911 calls from the June 12 massacre in Orlando.

Nearly 30 minutes of audio from Mateen’s calls were released Monday after a judge in Orlando ordered the city to make them public. Police spoke with Mateen in a series of phone calls that took place between 2:35 a.m. and 3:25 a.m. on the morning of the shooting. Transcripts of the calls were released in September, but it’s the first time recordings have been heard by the public.

The calls started when Mateen contacted police to tell them he was responsible. The first call started with him reciting a prayer in Arabic before saying he “did the shooting.” A dispatcher asked his name, to which he replied, “My name is — I pledge allegiance to (Abu Bakr al-Baghdadi) of the Islamic State.”

Mateen hung up on the dispatcher, but a negotiator called him back.

“Can you tell me where you are right now, so I can get you some help?” asked the negotiator.

“No, because you have to tell America to stop bombing Syria and Iraq,” said Mateen. “They’re killing a lot of innocent people, so what am I to do here when my people are getting killed over there? You get what I’m saying?”

“No. You already know what I did,” said Mateen.

“By the way, there’s…there’s some vehicle outside that has some bombs, just to let you know,” says Mateen in the same call. “Your people are gonna get it, and I’m gonna ignite it if they try to do anything stupid.”

“Okay, I understand that and I’ll pass that along,” says the negotiator, who identifies himself as Andy. “Can you tell me what vehicle, because I don’t want to see anybody get hurt.”

“No. But I’ll tell you this — it can take out a whole city block almost,” says Mateen.

At the end of the call, Mateen named other men who have committed terrorist acts, calling them his “homeboys.” “So now, it’s my turn,” he said.

The shooter hung up on the negotiator, who called him back more than a dozen times. “You’re annoying me with these phone calls, and I don’t really appreciate it,” Mateen said in one of the last calls with police. The negotiator told Mateen to put down his guns and go outside to talk with police. Mateen hung up and stopped picking up his phone.

Just after 5 a.m., a policeman drove an armored vehicle into the wall of the nightclub. At least eleven officers exchanged gunfire with Mateen, shooting as many as 150 bullets. Mateen was reported down at 5:17 a.m.

In all, 49 people were killed, and 68 were injured on June 12. Attorneys from two dozen media companies spent months pushing for the release of the 911 tapes. Orange Circuit Judge Margaret Schreiber ordered the city of Orlando to release them immediately Monday.

Interesting how this is coming to the forefront now, percolating it up into the headlines once more.