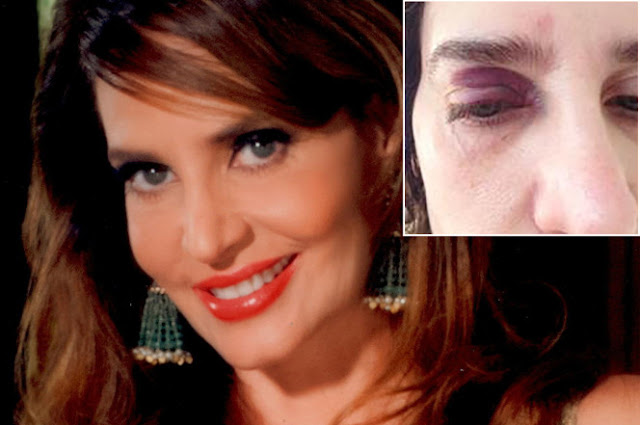 Here is an article with quotes.  A woman is suing United Airlines after the video has been released of a 69 year old male passenger forcibly removed.

A physical assault is very "up close and personal" and something we expect the language to reflect, especially given its nature and the passage of time.

Those trained in Statement Analysis read news reports through this lens.

Is she telling the truth?

A former Miss Venezuela is suing United Airlines over a nightmarish midair incident in which a flight attendant handcuffed her and enlisted two burly men to forcibly remove her in a dispute that escalated after she asked for a pillow.

Carmen Maria Montiel, a Houston journalist and mom, recounted her ordeal in sympathy for Dr. David Dao, the United passenger who was dragged off a flight last week after he refused to relinquish his seat.

“I can only imagine how he felt. I will forever be terrorized for what happened to me.”

If she experienced the same, why would she "only" be capable of "imagining"?
We expect a strong affirmation:

"I know exactly how he felt."

"What happened to me" is not "what they did to me."
This quiet shift to passivity is not expected in an assault.  Even if one felt the need to dissociate from it, the passing of time would not indicate such, given the context.

Montiel was aboard a United red-eye flight in June 2013 from Houston to Bogota, Colombia, with husband Alex Lechin, a pulmonologist with whom she was engaged in a bitter divorce, and their 14-year-old daughter.

This is an interesting detail.  She was flying with a husband with home she was "engaged in a bitter divorce."  This statement made by the press comes from her.  Though it is not a quote, it is context. It increases tension before the account of an assault.

According to her account, Montiel asked flight attendant Samuel Oliver for a pillow, but he told her the airline no longer provided them. She complained to him about the service.

Montiel then propped up blankets and laid her head on her husband’s shoulder to sleep.

But Lechin “slapped” her, she alleges, and pushed a call button to summon Oliver, telling him Montiel was “invading his space.”

This now explains why she chose to tell the Post about the bitter divorce.

The couple continued to argue, and Lechin again alerted the flight attendant that his wife was “still bothering him,” according to the lawsuit.

Consider the scenario:  the husband is complaining that the wife is making unwanted physical contact with him.

Oliver then presented Montiel with a written incident report, telling her it was a “warning” and she had to sign it. Montiel says she refused, but changed seats to move away from her husband — who had complained she was upsetting their daughter.

When Oliver told Montiel to move to the coach section, she wouldn’t budge. Montiel says that Oliver, after huddling with her husband, recruited two heavyset men who handcuffed the 120-pound woman with plastic zip ties, grabbed her by the shoulders and carried her to the rear of the plane, sitting her next to an off-duty Houston cop. The lights were out and most people were sleeping.

“I never felt so powerless in my life,” Montiel recalled.

This is likely the truth. She sought to cuddle and gain comfort from her husband, but was not only doing so against his will, but to the point of upsetting their child. This is language similar to others in an unwanted divorce.

Before the incident, Montiel drank less than a glass and a half of wine, she said. She denies widely reported rumors that she was drunk or assaulted Oliver, who complained that he felt “intimidated.”

Two months later, Montiel was indicted in federal court on a charge of interference with a flight attendant. ​During a three-day trial, the ​captain testified that he did not authorize her removal or arrest. The jury found her not guilty.

“It’s about the culture of United,” Montiel said. “They treat the customer as the enemy.”

She did not say "they treated me as an enemy."

She noted a 2015 lawsuit against United for making an emergency landing to eject a couple and two children, including an autistic 15-year-old girl, citing “a behavior issue.”

“They’ve done it so often, it’s gotten worse to the point of what happened with Mr. Dao,” Montiel said. “There is something terribly wrong here.”

First note that an alleged assault victim unfavorably compares her alleged assault to Mr. Dao's.  This is not expected by a victim, especially in this context. Had something far worse happened to Mr. Dao, such as causing his death, the context would be shifted and the comparison appropriate.

When the video emerged showing Dao being wrestled from his seat and dragged down the aisle, Montiel’s three children texted her, “Look Mom, this happened to you,” she said.

Her words do not match the allegation.
Peter Hyatt as Statement Analysis Blog at 6:57 AM

The first question I have is, why did you put a photo of Florence Henderson on the article?

This morning @markitproud co-founder @dwmcreative and husband Aaron Boros found this on our garage. We can't tell you how unsettling this is. Even though we've always felt blessed to live in an inclusive city such as Toronto — particularly with the way things have gone downhill in the United States under the Trump administration, not to mention the truly tragic news out of Chechnya — this is an awful reminder that Toronto and Canada is far from perfect. Please let this post serve as a reminder to our fellow LGBTQ that you can never be too careful. Also, we would like to take a moment to thank the @torontopolice, who took this report very seriously and were on the scene within the hour to investigate.

Media is not reporting on How Dr. Dao's Injuries were Caused.
He was Resisting removal, and during the scuffle, he hit his head against the armrest. Most news reports allow viewers to conclude that Law Enforcement caused the injuries by dragging the man down the aisle.

Hope he sues le and ua.

I've seen it said repeatedly that he hit the armrest.

United' contract of carriage allows it to not BOARD people as it chooses. My understanding is that it doesn't say anything about kicking people who have already boarded and seated off. There was no justification for demanding these peopls give up something they'd paid for because united can't coordinate getting its employees in the right place. And their failure to do that doesn't justify the force used. They should have continued upping the offers until someone accepted it.

The fact is that this guy paid for a seat and they simply wanted him to leave a full day later because of their staffing failures. The GALL of that man, wanting what he paid for. There was no justification at all for the amount of force used.

The cops didn't strike this guy - he got bloodied trying to struggle away from them.
United got bad press multiplied, and are trying to back-pedal to appease the public outrage.
The guy will probably sue for big bucks & his attorney is already detailing his injuries.
United will pay dearly, but I don't think they should pay damages for the injuries.

Maybe they didnt injure him while they dragged him on the floor of that narrow aisleway.

Why should UA not be liable for his injury as well as police. He paid and received a ticket for a boarding pass and seat and passed screening and then UA personel tried to steal that from him. He resisted the robbery and UA called police. Nobody could've mediated? Nobody? The police arent equipped to mediate in that situation. But they carried out UA's orders and protected the criminal(UA) and injured the victim.

They were dragging him on his Back, so how did he get a concussion and lose 2 teeth?

Do we have to go thru Facebook to access comments on Breitbart or what? Whats the problem here? Very few articles will go straight to comments. I'm starting to wonder if the comment tally is fake.

Now news reports say Dr. Dao was "violently dragged" down the aisle.
That is Not what I saw on the video.

Being dragged in and of itself, is violent.

Did it occur to you there might be more to it? Being dragged is not a gentle thing.