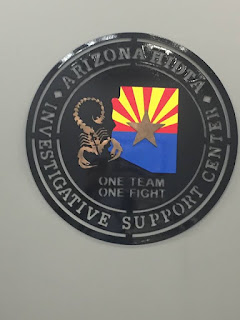 Congratulations to those who completed the HIDTA (high intensity drug trafficking area) training in Tuscon, Arizona  this week.

This is a talented class of professionals who quickly embraced the basic principles of Statement Analysis and showed both a hunger to learn and keen intellects.  They moved quickly from case to case, combined instinct with principle, and were an exciting group to teach. They asked all the right questions.

Many have jobs that are "gold mines" of opportunity to use Statement Analysis daily in their work.  With a director who is committed, experienced, intelligent and with a good sense of humor, they furthered their own professional foundation with HIDTA's training opportunities.

For those enrolled in our monthly live trainings, the training invitation goes out the night before.  The norm is to include statements, but not always.  It is beneficial for some trainings to go into a statement without preparation.

For those who wish to enroll in our training, Complete Statement Analysis is available to be completed in your home and it comes with 12 months of e support, but also one free invitation to the live 6 hour training that is done monthly with analysts from the U.S., Canada, Germany, France, Sweden, Switzerland, Norway, Russia, Australia, and so on.

New enrollees are often pleasantly surprised how supportive professional analysts and instructors are.

Tuesday 9am to 3pm EST

Wednesday 10am to 4pm EST

Any questions about your yearly subscription or about training should be sent to:  hyattanalysis@gmail.com and visit our website at Hyatt Analysis Services for more information.
Peter Hyatt as Statement Analysis Blog at 11:11 AM

PROVIDENCE, R.I. – Insurance company lawyers on Monday blasted a Vermont man whose mother was lost at sea, saying he made suspicious alterations to his boat before what they called its "most curious sinking."

Lawyers for Nathan Carman's insurance company said in documents filed in federal court that the Vernon man is refusing to cooperate as they investigate his claim for his boat, which sank during a fishing trip he and his mother, Linda Carman, took out of Rhode Island in September 2016.

"With missing evidence, including Nathan Carman's mother and his suspicious structural alterations and repairs to his boat, plus its most curious sinking off the continental shelf, defendant's pre-litigation testimony on these topics is critical evidence here," lawyers for the National Liability and Fire Insurance Co. wrote.

Nathan Carman's lawyers didn't immediately return messages seeking comment Monday. According to documents filed with the court, his lawyers have said the insurance company is asking questions that are overly broad and not relevant to his claim.

Monday's filing said Carman is refusing to confirm that testimony he gave under oath as part of the insurance investigation in December is true and accurate. The insurance company lawyers wrote that his objections "are evasive and not in good faith."

Police have said Carman is a person of interest in the 2013 slaying of his millionaire grandfather, who was found fatally shot at his home in Windsor, Connecticut, in 2013. Carman's aunts have sued in New Hampshire to try to block him from collecting an inheritance. The grandfather, real estate developer John Chakalos, left more than $42 million to his four daughters. Carman has denied involvement in his grandfather's death.

Peter- fake hate? I am wondering if it was planted there by the "friend" who was with them, Ms. Cohn.

A British glamour model's claim that she was kidnapped and offered for sale on the dark web could be "a sham", a court has heard.

Chloe Ayling, 20, was allegedly drugged and stuffed into a suitcase after being lured to a fake photo shoot in Milan in July.

Ms Ayling told police she was taken to a remote farmhouse near Turin and held captive for six days, until she was reportedly freed when kidnappers discovered she was a mother.

Lukasz Herba, 30, was arrested by Italian police on suspicion of kidnapping for extortion purposes, while his 36-year-old brother, Michal Herba, was held in the West Midlands over his alleged involvement.

The latter appeared at Westminster Magistrates' Court to fight extradition on Monday, where his lawyer warned district judge Paul Goldspring there was "a real risk that the entire case is a sham".

George Hepburne Scott said: "The same complainant, it seems, generated publicity from the fact she was nearby the scene of a terrorist attack at the Champs-Elysees in Paris.

"Prior to the release of the complainant, the kidnapper apparently issued a press release to a tabloid newspaper setting out that this lady was being held for auction."

Michal Herba's lawyer also referred to an alleged trip during which Ms Ayling and her captor went shopping for shoes, describing it as a "wholly anomalous feature of a hostage situation".

He said: "It would amount to an abuse of process of the court if there was any evidence to suggest this was a publicity stunt.

"This case has a unique set of anomalies which might lead to the conclusion that the Italian authorities have been duped and that their process has been abused."

Judge Goldspring said that just because the claims about Ms Ayling's alleged kidnapping appeared in the media, it did not mean they were true.

"Some believe it to be a sham," he said. "This material doesn't prove that".