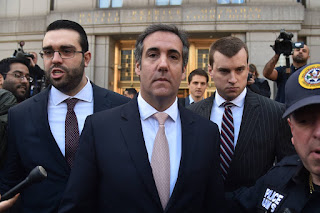 What should we expect based upon the release of a single quote from Donald Trump's attorney, Michael Cohen?

The Mueller investigation originated with the investigatory question of “Did Trump criminally conspire to overrule the democratic votes of Americans?". After 1 1/2 years of this investigation, it appears that there is no Russian criminal conspiracy to negate votes.  However, a Russian conspiracy of a different nature may have emerged. This is the use of a fake dossier to spy upon Americans, and to pervert the investigation into the Clinton server and charity.

The Mueller investigation took a turn to investigate anything and everything involving the Trump campaign. This now appears to include Stormy Daniels.

The president’s attorney, Michael Cohen, had his office raided and files confiscated.

To the American people, this stands in stark contrast as federal investigators did not safely nor speedily obtain the files and devices involved in the Hillary Clinton server investigation.

Hillary Clinton deleted more than 30,000 emails, used “bleach bit” and staff physically destroyed evidence. Hillary Ckinton lies to the FBI and recently, the former head of the FBI stated that he did not know Huma Abedin was married to Anthony Weiner, of whom government documents from Clinton were found.

With lying to the FBI, and the destroyed evidence thus far, this is without consequence.

This, along with the biased inappropriate text messages from the investigator, Peter Strzok, has led to  public outrage.

ABC has promoted a “tell all” interview with Michael Cohen. In their release, we find an interesting statement by Cohen for analysis.

“I am not a villain of this story, and I will not allow others to try to depict me that way.”

This is very little information to go on but it suggests that the program is not likely to reveal much beyond salacious details of an illicit affair.

“I am not a villain of this story, and I will not allow others to try to depict me that way.”

This simple article, a single letter, tells a story.

Articles and Pronouns are instinctive in the English language. This means that they are pre thought, used without pause.

"A man approached me with a gun.  He stuck the gun in my back and told me to give him my money and cell phone."

Did you notice that "a gun" changed into "the" gun?

This is because once introduced, the noun is "recognized" and referred to as recognized.

Remember, even adults with Aspergers presuppose their speech will be understood.

The same sentence suggesting a scam:

"A man approached me with the gun. He stuck it in my back and asked me for my money and cell phone."

"the" gun suggests prior recognition, which is affirmed by the softer, "asked" indicating that:

a. the gunman and the subject know each other or
b. there is no such gunman

Either way, it is a scam.

The context of the Mueller Investigation is this:

Did Donald Trump criminally conspire with the Russians to annul the votes of the American people?

This is impeachment and removal criminal behavior; not partisans. This is the context of bringing the president's attorney on national television and the context of which his office was raided and his personal files confiscated.

It is chilling for Americans who watched and learned that federal investigators massaged the Clinton investigation in order to clear their supposed future boss while attempting to maintain a veneer of respectability.  Corruption at the top is always dangerous.

The "villain" in this context is Donald Trump.  He is accused of criminal conspiracy of nullifying our votes.  This is, perhaps, the single most egregious allegation that a candidate, not in office, can be accused. In major wars, men have died to preserve our citizenry right to vote.

Given this seriousness, such an allegation, if true, is to prove one to be a traitor to the United States of America, which would lead to facing the death penalty.

Consider this serious context and listen to Cohen's words as reported by ABC:


“I am not a villain of this story, and I will not allow others to try to depict me that way.”

Michael Cohen that he said “a villain” instead of “the villain” which would be Donald Trump.  It would not be Putin or the Russians, but the candidate who criminally conspired to overthrow democracy.

There should be a single villain in his language.

Expect that ABC to deliver much ado of nothing for its audience, except those who wish to know details of a tawdry and illicit affair.


To learn how to discern deception, at home or in your department or workplace, contact Hyatt Analysis Services.
Peter Hyatt as Statement Analysis Blog at 8:53 AM

It’s satisfying to read the first statement mentioned in your article and instantly spy the one word that will become the focus of the post.

I found this additional quote by Cohen. I wonder why he quickly asserts the “new” counsel:

Once I understand what charges might be filed against me, if any at all, I will defer to my counsel, to my new counsel Guy Petrillo for guidance on future responses."
https://abcnews.go.com/US/telling-moments-exclusive-michael-cohen-interview/story?id=56313089

"A" villian would sound logical to me in terms of "one of many". Not being THE villain still gives room to having contributed. He wants to make sure nobody considers him anywhere near whatever it is part of the general public assumes.

He's not a villain in the story he is telling, he is a villain in a different story that he doesn't want told. He will not allow people to depict him that way: he is willing to violate the first amendment and his oath to uphold the constitution in order to hide the truth about something.

What do you think of this showing criminal profilers to be fakes?

What is psycholinguistic profiling?

Democratic Statement
“...we recognize that America’s founding promise remains out of reach for too many families." “Everywhere we look, our most fundamental values are under attack. Thousands of children have been separated from their parents at our southern border. At our highest court, workers' rights are being taken away, voting rights are under assault, Muslim Americans are being discriminated against for their faith, and women's right to choose is under threat like never before.

Republican Statement
"As we celebrate more than two centuries of independence, we honor the patriots who declared America a free nation in 1776," said Ronna McDaniel, chairwoman of the Republican National Committee. "We also remember and thank our service members for their lasting dedication and countless sacrifices to guard our liberties."
McDaniel pledged "to uphold America’s founding principles and continue to fight for our inalienable rights: life, liberty, and the pursuit of happiness for all."
https://www.usatoday.com/story/news/politics/onpolitics/2018/07/04/democratic-national-committee-july-4th-statement/757585002/

DIVERSITY: Variety in culture and ethnic background, race, lifestyle, and belief is not only permissible but desirable and beneficial in a pluralist society.


Constitution Principles:
INDIVIDUAL RIGHTS: Fundamental to American constitutional democracy is the belief that individuals have certain basic rights that are not created by government but which government should protect. These are the right to life, liberty, economic freedom, and the “Pursuit of happiness.” It is the purpose of government to protect these rights, and it may not place unfair or unreasonable restraints on their exercise. Many of these rights are enumerated in the Bill of Rights.

FREEDOM OF RELIGION: There shall be full freedom of conscience for people of all faiths or none. Religious liberty is considered to be a natural inalienable right that must always be beyond the power of the state to confer or remove. Religious liberty includes the right to freely practice any religion or no religion without government coercion or control.
https://www.hasdk12.org/cms/lib3/PA01001366/Centricity/Domain/854/American%20Core%20Beliefs.pdf

Ideology is the term widely used to describe the underlying set of values, myths, ideas, attitudes, beliefs and doctrine that shape the behavioural approach to political, economic, social, cultural and/or ecological activities of an individual or organization.

Where does “ideology” apply in our rights and responsibilities according to our founding fathers? Is it possible many believe religion and ideology to be synonymous and interchangeable?

I just read a book at the library about the birth of criminal profiling, it certainly seems it was accurate and helpful in the "Mad Bomber" case they outline.

I too would be interested in what Peter thinks about criminal profiling.

For those interested in a previous article of Peter’s re: profiling.

OT-
Peter,
P!ease analyze Justin Trudeau's comments in response to allegations of his having groped a reporter 20years ago, I believe at a concert. Video at the Guardian. Probably more extensive comments elsewhere. Sorry I'm unable to provide link.
Jo

Self referencing of unreliable denial indicate he is deceptive.

Where's Wayne Gretzsky when we need him?

Or, a Mark Messier elbow to the kisser?