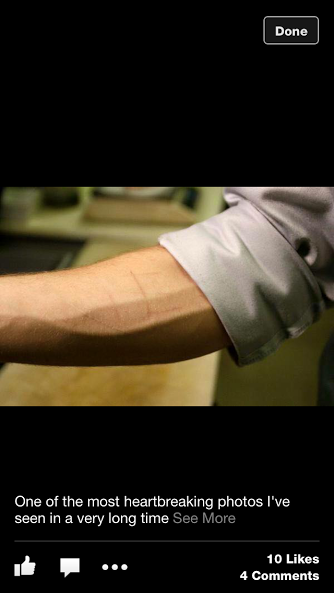 Ricky Jones has announced that he will not be taking the money raised at "Go Fund Me", which was more than $11,000

He reported to have been a victim of hate attack, that is, he was attacked for being gay.  He said that he sent his employees home, was attacked over the head, knocked unconscious, woke up to being forced to drink bleach, had "die fag" carved into his arms.

A week or so later, he reported that he was attacked again, this time by a "Molotov cocktail" that came through the window, but failed to explode.

Jones was likely acutely aware of the consequences of fraud, and may have made a deal to avoid prison time by declining the money.

Scammers are seeking money by claiming false attacks, and defend any criticism with more false cries of "homophobe!" when one challenges the fake story.  Rather than say, "I am telling the truth", they use the word "hate" to silence those who question them.

For many, this is a signal of deception and may be something people learn from.  Recall Julie Baker, the "relentlessly gay" hater of Christians who, instead of saying, "I didn't write the note", stopped donations and claimed it was "hate" (i.e. "homophobia", or the fear of homosexuals) that was causing some to doubt her account.  This defense is a manner of silencing doubters who may interfere with her scamming of the public.

As to all fake hate reports, this is not a victim less crime, as donations were received, and there was always the possibility that an innocent man could be arrested for the crime.  Not only this, but people who doubt the fake hate stories are slandered, which only increases angry responses.  It is a "lose-lose" situation.

Jones, owner of a pizza parlor, claimed to have lost more than $1800 in a robbery, which also was untrue, and now claims he is "cooperating" with police.  It is unknown what charges and potential sentence he could face, or if any deal with police has included the refunding of money.

His hashtag is "help stop the hate."

The hate came from him, and was directed towards good hearted donors without discretion and towards an innocent who could have been falsely arrested so Jones could make money.

It is similar to the attack by 3 masked men who broke into Charlie Rogers' home, carved hate slurs into her flesh, and set her house on fire.

She also was given great sympathy and money, but eventually landed in jail for her false report.  It may be that he got the idea from her, as he has copied two specific elements of her "crime" report:

Another similarity between the two is that media is not questioning his account, just as it avoided any questioning of Rogers' account.

What happened to investigative journalism?

It was his Face Book posting that also helped identify the deception.

His "fake hate" preceded Julie Baker's scam, who may take notice of what Jones has done. 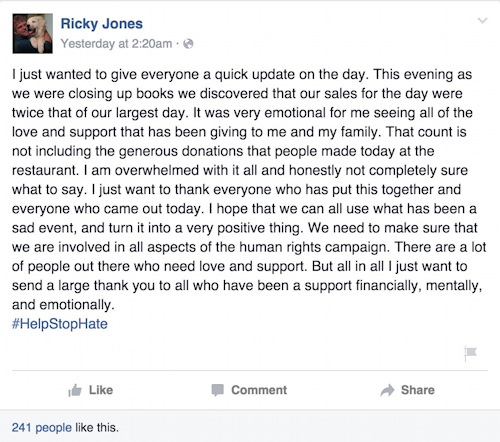 It took a few more news articles where he reported what happened to show enough signals of deception for me to be comfortable with "deception indicated" as he is concealing the identity of the attacker.  This tells us that he either did it himself, or worked with someone else, but it is a false police report.

Ricky Jones is also deceptive about what happened to him, and is perpetrating another "Fake Hate" claim with the clear goal of money in a small community.

He is getting the predictable responses, which have included comments about how the attacker must be a "Christian" as the angry responses turn against people of faith.  I do not know if Mr. Jones knew that people might blame Christians or not, but lying is inconsistent with "help stop the hate" since lying is to counterfeit the currency we exchange in life.  It breaks trust, destroys lives, ruins businesses, and falsely imprisons.

There is also the continual divisiveness of our nation, and the endless gaming of the politically correct system where the ultimate victim is truth.

The false flag is one that does, in deed, wage war, but not always as expected.

Criticism is blunted with "homophobe" or "hate monger" or "racist", which only increases the animosity and destroys credibility for others who may be victims of actual crimes.

So glad you are covering this! Awesome work! I'm wondering if you can do one on Nick Gordon, the person who is accused of putting Bobbi Kristina Brown in a coma. If she dies they are considering filing murder charges against him. I'm interested to see if he possibly is guilty or not. Several statements made by him make me think he did hurt and steal from her

It is always good to be proven right about truth or, in this case, deception.

Reminds me of the Dayna Morales incident

MIAMI LAKES (CBSMiami) — On the evening Miami Lakes Mayor Michael Pizzi crashed his car into a tree on N.W. 82nd Avenue, he ran from the scene, according to a 911 call obtained by CBS4 News.
At about 8:30 p.m on June 15th, Pizzi rammed his Kia sedan into an oak tree, telling police he had swerved to avoid an animal in the road. Police, at the time, reported Pizzi left the scene to have a neighbor tend to a cut on his forehead.
The 911 caller said Pizzi left the scene in a hurry
.
“There’s a car that just had an accident with a tree, and the guy left, running,” the caller told a police dispatcher.
“The guy hit the tree and he left running away on foot?” the dispatcher asked.
“Yeah. And he left the car right in the middle of the street,” the caller replied.
Pizzi as of late Thursday afternoon had not responded to CBS4’s messages requesting comment.

Earlier in the day, however, before the 911 call was released, CBS4’s Gary Nelson interviewed Pizzi about his accident. It was his first comments, other than a written statement, since the crash.
Where had Pizzi been, what was he doing before the accident?

“I was at city hall, meeting with some constituents,” Pizzi told Nelson. “I was actually on my way home.”

But CBS4 learned, and the night manager confirmed, that Pizzi was at the Cancun Grill, in the bar area, before the crash. The manager would not say what if anything Pizzi had to drink, and declined to provide any receipts or security video from the interior of the bar area.
What about Pizzi’s response to being at the bar before the crash?
“I don’t recall being at Cancun (Grill),” Pizzi said.
“Surely you would remember if you were at the Cancun Grill,” Nelson asked.
“No,” Pizzi replied.
“You do not remember if you were at the Cancun Grill?” Nelson asked again.
“No, no,” Pizzi said.
When police reached the smashed tree and car, Pizzi had left the scene.
“Where did you go when you left the scene?” Nelson asked.
“Well, I just, I went across the street to my house and had a tow truck come and the tow truck came,” replied Pizzi.

Police said Pizzi told them he went to the nearby home of a friend to get help with a cut on his forehead. Pressed by Nelson, Pizzi said he both went to his home to call a two truck, and also got a friend to put some “hydrogen peroxide” on his cut.
As for the mayor’s assertion that his house was across the street from the accident scene? It’s not. It is down the street, around a corner, down another street and in a gated community nearly three quarters of a mile away.
When asked why he didn’t use his cell phone to call for help, Pizzi first said his phone was “not operable,” and then said he didn’t have his cell phone with him.
Pizzi insists he was sober.

“I did not drink any alcohol. There was no alcohol,” Pizzi said.

The police report says there was no indication Pizzi was impaired.
The report does say Pizzi operated his car in a “careless or negligent manner.”
No citation was issued though, because police say no one witnessed the impact. That would seem to differ with the 911 caller, whose call suggests he saw the crash.
Pizzi called questions over his run-in with the tree much ado about nothing.
“I was involved in an accident, with no other cars, no injuries, no charges. If it wasn’t me, nobody would care,” he said.

Pizzi, who beat federal corruption charges and survived a grinding collision with an oak, was greeted by adoring constituents at Thursday’s hurricane awareness event.
“You have done such great things for this community,” one man told the mayor.

“I did not drink any alcohol. There was no alcohol,” Pizzi said


If it were me and I couldn't remember where i had been before a crash i would be asking for help from the public if they had seen me anywhere prior to the crash.
Had i been in a store or a restaurant or drive thru.

Any bets he has hired a lawyer?

If that image of the arm is of ricky jones arm then it was not carved into his flesh, it was a superficial scratch that will leave little to no lasting mark, something which is unintended by the assailant.

Such assailants would carve it deeply so as to leave a visible scar, they would also carve it where it would be visible such as the face.
Why carve a slur where it cannot be seen or can easily be covered up?