On Line Threat at University Analyzed 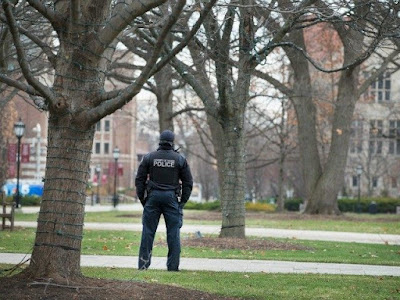 Here is the written threat that led to an arrest.  The FBI concluded that it was real.  What does the language tell us?

That the FBI arrested him is not in question:  they must take extra caution with the "better safe than sorry" view in mind.  We are looking not about justifying the arrest, but understanding the one making the threat.  It was left at "worldstarhiphop.com" which is known for publishing fights, especially between black women where men watch, video, and do not intervene, instead yell, "world star! world star!", indicating that it will receive publication.

Question for analysis:  Is it a real threat?

“This is my only warning. At 10AM Monday morning, I’m going to the campus quad of the University of Chicago. I will be armed with an M-4 carbine and two desert eagles, all fully loaded. I will execute approximately 16 white male students and or staff, which is the same number of time McDonald was killed.  I will then die killing any number of white policeman in the process. This is not a joke. I am to do my part and rid the world of white devils. I expect you do the same.”

Here is the same statement broken down for analysis.  We seek to learn if the threat is real regardless of detail.  For us, if the threat to kill is real, for example, and the writer does not posses a specific weapon, he could still commit violence in another way.  Therefore, intent to harm is important to the analysis.   We will use (+) to signal 'strength while (-) to signal weakness.

“This is my only warning.

1  It does not begin with the pronoun "I"

Where one begins is very important and often establishing a priority.  The first statement tells us that there is a doubt in the subject's mind of being taken seriously so he wants his audience to know that this will be his only threat.  This presupposes doubt, in his mind, by his audience.

Statements that begin with the pronoun "I" show a marked increase in reliability.

The word "this" indicates closeness, with the topic being his "warning."

The first thing we note is that the subject believes his audience will doubt him, (-) and that it does not being with the pronoun "I" (-)

At 10AM Monday morning, I’m going to the campus quad of the University of Chicago.


I will be armed with an M-4 carbine and two desert eagles, all fully loaded.

Here we have him showing specific intention of having an M-4 carbine (note the use of the article "an"), which is strong, yet we then have the unnecessary "fully loaded" added.  If this is going to be a "world star" violence, the weapon would have to be loaded.

He has used 32 words of 93 to get to "execution", which is a lengthy introduction.


I will execute approximately 16 white male students and or staff, which is the same number of time McDonald was killed.

Note that he does not say he will "shoot" them, since he is "fully loaded" but will "execute" them.
It will be 16 while males students and, or staff and gives the reason for the number:  "McDonald."

Please note that the shooter of McDonald is in jail, facing murder charges and not free.  He is facing justice.

Does the subject know this?

Note that he only uses the last name, "McDonald" and not the first name.

The victim's first name is distinctly black or African-Amerian as it is, " Laquan."

Since he introduced race with "white" male students, would you have expected to hear "Laquan" in his language?
Also, since this is about "race", would you expect only "males" to be "executed?"

Question for analyst:  Is the subject showing genuine racial anger?


I will then die killing any number of white policeman in the process.

In a fire fight, with him being "fully loaded" and only shooting white "males", he will now die while killing the discriminated victims:

This is to claim the ability to control the firefight.  Given the use of the proper article above, we may conclude that this is not someone who suffers from low intelligence.

This is not a joke.

This is in the negative and it is in the free editing process making it very important.  It should be understood with the initial statement where he would not be giving any more warnings.  (-)


I am to do my part and rid the world of white devils. I expect you do the same.”

He posted this on a website that highlights black violence for entertainment but he does not show strong, angry racism that could translate into a threat as he describes.

Although it may hurt the feelings of the racially sensitive, this subject does not show harsh venomous emotion towards whites.  He claims that this is his part of ridding the world of "white devils" while limiting his role, in spite of impressive weaponry, to just 16 of them, and, perhaps, a few white police males.

It is best to arrest him for making this threat, but I do not believe that, even if a gun owner, he was going to go through with this, nor does he show the rage associated with either a loss of control, or a strong commitment.  That he would "execute" rather than "kill" or "shoot", is the language of control.  One can "execute" while having control, but in a shoot out with victims running and police responding, it is a spraying of bullets intending to kill.

Conclusion:  This is not a genuine racially motivated killing spree about to happen.

I wonder if the subject actually has racial hatred.

The FBI did the right thing, however, in arresting him.

What did the FBI tell the school?

We do not know, but for some readers, this statement by the school president, Robert Zimmer will be in agreement with the analysis:

"Based on the FBI’s assessment of this threat and recent tragic events at other campuses across the country, we have decided in consultation with federal and local law enforcement officials, to exercise caution by canceling all classes and activities on the Hyde Park campus through midnight on Monday."


Had the threat been stronger the closing might have been based upon it, without need of "recent tragic events..."
Peter Hyatt as Statement Analysis Blog at 4:13 PM

This is a long article:

Re-written as exercise to make statement stronger for SA purposes. Is it stronger?

In the name of justice for Laquan McDonald, executed in cold blood at the hands of white-devil police, I will go to the campus quad of the University of Chicago at 10AM Monday morning, 11/30/15, and will shoot to kill as many white male students and white male police officers as possible. I will use an M-4 carbine and two desert eagles. WE MUST FIGHT AGAINST THE COLD-BLOODED MURDER COMMITTED UPON US BY THE DEVIL WHITE MAN!!!

just trying to re-create what a "credible threat" would look like, for purposes of learning SA.

I posted this a week or so ago. It may have been missed


Lately there are so many hate hoaxes that to attract attention hoaxers have to go over the top. Once it was enough for theoretically oppressed persons to scrawl “n*****” on their own door and weep to the authorities that Whitey did it. Now we read stories like this.

Look at the author language, (above) albeit hypothetical, in comparison to the threat. (Soft language)

The message triggered an investigation and police security response that led to the arrest of a Delta College student living in SVSU housing.

Emmanuel D. Bowden, 21, is charged with making a false report or threat of terrorism, a felony that carries a maximum penalty of 20 years in prison.

It appears that Bowden’s defense against this charge will be the trusty standby, “I was just kidding.”

As anyone who hasn’t been living in a cave for the past decade would probably guess, Bowden is a person of politically preferred pigmentation:

Emmanuel Bowden
He was arrested Tuesday morning on an unrelated warrant.

The next day, far from Michigan in Arlington, Texas:

A 17-year-old Bowie High School student was arrested in connection with threatening posts made on social media against her school.

Pretending to be a “white” student at Bowie, Jones posted three threatening tweets — one including a picture of a handgun with a threat of a school shooting.

The tweets caused a “chaotic scene” when as many as 300 students left school out of fear for their safety, according to an arrest warrant.

…few will be surprised to learn that Jones looks like this: She is black

Watched her dad's message from this Sunday. My only thoughts is I don't trust in laws who call their mother-in-law, father-in-law, mom and dad. My brother-in-law does this and it is so freaking fake. You have one mom and one dad.