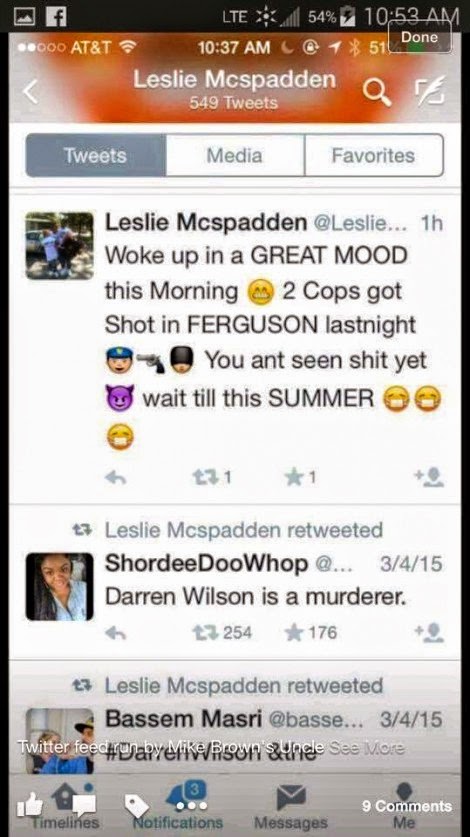 Michael Brown's mother responded to two cops being shot in Ferguson, while the "Brown family" made an anti-violence statement.

Media originally reported "hands up" and a surrender.  The federal investigation found that this was not only not true but made up by media.

What does this mean?

Someone, at some time, individually, invented this.  Someone is responsible for it.

Trust for main-stream media is low and not because of recent Brian William's "Commander McBragg" statements.  Deception and political slant has always been part of American journalism, yet the rush for attention in our generation has been a rush towards money in a manner that is unprecedented.

Darren Wilson is out of his career, and now two more police officers have been shot, and the nation remains divided.  Police remain targeted by our politicians, being portrayed negatively.

As charges have been considered against the Brown family for inciting violence (and arson), we note that these posts do not help.

Michael Brown’s mother went on Facebook last night to express her thoughts on the two Ferguson cops who were shot two days ago.
Here’s what she said:

“If my FAM woulda got JUSTICE in August maybe those two comps wouldn’t have got shot LAST NIGHT…”
“F*** THEM 2 COPS..DON’T GOT NO SYMPATHY FOR THEM OR THEY FAMILIES…Aint no FUN when the Rabbit got the GUN.”

The "hands up" claim from a guy recording the chaos and overheard another claim the Brown boy had his hands up. It was recorded with a cell phone.

The investigators are engaging in revisionist history making.

The media can't be trusted as they add fuel to the fire-especially on race issues. They know from past experience blacks will destroy everything in sight if another is killed. It makes good news when that happens.

Oh gosh, Peter. The mother is LeslEY. I understand this tweet is Michael Brown's uncle, LeslIE. Bad enough if it's the uncle.

“If my FAM woulda got JUSTICE in August maybe those two comps wouldn’t have got shot LAST NIGHT…”
“F*** THEM 2 COPS...DON’T GOT NO SYMPATHY FOR THEM OR THEY FAMILIES…Aint no FUN, when the Rabbit got the GUN.”

I find it interesting where she capitalizes.

Note the first pronoun is lower case "my" plus the qualifier "if". Why won't she own her family with capitals "MY" ? Yet the next word "FAM" is capped. These two words are along side each other. But yet she drops the cap on "my" and then caps "FAM" ? Is she distancing herself ? And if so why ?

It's always somewhere else. Not in America. Where three or more are gathered....

Thanks for clarity; added "Aunt"

This, of course, is folly.

It does not extinguish racism, it ignites it.

Escalation of speech, or lack thereof:

Defense of free speech is only needed when a jackass begins to sound off.

It tests us, as a society.

I prefer the "societal shunning" method where we "vote with our feet" that is, if someone is a racist and I am a Human Resources professional, I will not hire him...that is, if there is no government interference.

I would prefer to allow freedoms to be answered with our wallets. If a restaurant, for example, shows prejudice against a people, I can then choose to not patronize it.

Eventually, the foolishness of racism is felt in the bank account.

It works better than government interference.

Yes, racism is affecting us all.

Perhaps we should break out the champange and celirate when an expensive looking vehicle sits in front of our homes and glares. Or knocks on our doors at 4 am. Or steals our mail, or destroys our property.

At least it would be a starting point at making sure everyone is treated equally (though people aren't equal and some should be threatened more than others).

Only thourgh cyberstalking and in person stalking are these people REALLY identified.

I wonder how many more generations will come and go before racism is truly no more....

This tweet by the mom shows us exactly why Michael Brown had no respect.


He was raised by a woman that has no respect.

The cops that were shot didn’t shoot her kid. They were innocent yet she is glad they were shot.

And as far as the hands up….. How many people said they witnessed the whole thing….. And now consider the fact that pretty much everyone these days has a phone with a built in video camera…. The simple fact that not a single video is out
there showing Michael with his hands up saying don’t shoot is because it NEVER happened.


All those witness not a single video to prove Michael was the innocent target…….


16 by the way testified that he put his hands up? Yet no one had a phone to capture this. And only one cop who was clearly busy so can't say they were afraid to tape it. he's sure not stopping 16 people when he's already dealing with Michael.


It's the little details that really make it so clear.

16 witness and no proof.

THIS woman (if you can call her that) disgusts me. She should take lessons from Sabrina Fulton. I know Tre'von wasn't killed by a cop, but if violence begets more violence, the cycle never ends.