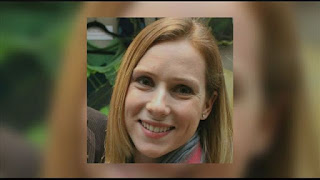 Note the announcer's strange caveat before the video, as if a man crying is something that might 'trigger' viewers.

Then, note how heavily edited the statement is.


When such editing is done, it is difficult to gain context.   As some have noted, there is distancing language in the husband's statements which may be due to a variety of reasons, ranging anywhere from a signal of a poor relationship all the way up to guilt.

In some statements, we have noted that he has avoided using her name and here he uses the 2nd person 'universal' language, which is also to distance oneself.  A missing person is not something the average person experiences.

We do not know if police have given him indication of foul play but note:

He praises the searchers (authority) who have failed to find his wife.
He indicates personal distance from her, specifically, within his statements.  If he is law enforcement, consider the praise of law enforcement as professionals not something 'sensitive' or unexpected.

Thus far, I have not seen enough sample from which to draw an opinion, other than 'concerns noted' in disjointed statements.

I posted this on Nicole's other thread, so this is a repeat:

Nicole and her husband have been separated for a number of months. I think that probably qualifies as a poor relationship.

There is a web forum where a bunch of Fairfax firefighters/EMTs have been saying terrible things about her since late last year. Now they're pointing fingers at each other for being the cause of her alleged suicide.

Sadly, I think suicide is a likely scenario here.

The only time i would expect to hear that, is if he had a good idea where she had been but didn't know where she was currently.

Is this based on where her vehicle was found or something else?

This would lead me to consider her being in water.

As an example, she was in a river, and he knew so/suspected so, but, due to currents and flow, she was no longer at the original place but somewhere else down stream.

The relationship was poor as they were separated, is there anyone else who could be involved?

Has she confided in anyone?

Would she have any reason to commit suicide?
Does he or the families think she could have committed suicide?

He does not seem to be showing genuine emotion as he sniffs a few times but his voice quickly reverts to normal tone and inflection.

Why would he need to read from a prepared statement?
Why is he thanking people for not having found his wife?

Has the house been examined for signs of injury or cadaverine?
The same for any vehicles.

Can you please post a link to the web forum you referenced.

Prepare to be disgusted.

"I am not sure where you are..." - interesting phrase. No one right now knows where she is. It feels like he knows where he last saw her body, but it may have moved (like if dumped in a river).

Also, they have her phone records... http://wtop.com/fairfax-county/2016/04/family-missing-firefighter-seeks-cell-phone-data/

The posters on that forum ... what loser pigs.

Some of SM's random fb posts:

Abc 7 news wjla
1/30/2015
Please do a story and help Virginia Troopers get some added attention for the important funding we need. No DMV station is covering this and this important issue affects all Troopers in Virginia. I am happy to provide further.

Ragner Relay Series
8/19/2014
Calling anyone who needs an entry into the Washington DC Ragnar Relay Series Event. Our original team has continued to fall apart due to injuries, transfers in work locations, military training, and whatever else. We have already paid for our entry, but can no longer field a full team. IF there is a group out there looking for an entry PM me for details. We are happy to sell ours for the early bird price we paid. Please help us out! Sad that we are having to do this, but it is a necessary evil.

Tim’s Rivershore restaurant & crab house
7/29/2014
Any chance there will be AYCE crabs for July 30th? It's my birthday and I am taking the day off and plan to keep me tradition of crabs at Tim's Rivershore Restaurant and Crab House going.

Dover Speedway
6/2/2013
I appreciate the extra security, but next time you need to communicate to those attending to expect long lines and wait times. The lines were ridiculous and having only two people at each gate with a wand was a joke. You better figure out a better way come October. Total FAIL!

Lupus foundation
12/12/12
I have always enjoyed donating to this fine foundation but calling my home at 8:35 pm is ridiculous. Almost as bad as political phone calls.

Autospa car wash
5/18/2011
I visit a few times a week as an unlimited customer and I have been seeing weekly specials for those who sign up to be new unlimited customer, but they are for new customers only. How about rewarding those of us who continue to be monthly unlimited wash customers. Just an idea.

from theknot wedding site:
Steve and Nicole met at a goodbye party for a coworker of Steve's. Nicole and Steve did not get off on the right foot at first, but Steve was smart and knew there was something special about her, so he worked hard to impress her and show her what a wonderful man he was. Nicole is very glad Steve was so persistent and that her first impression couldn't have been more wrong!

Select portion snipped: entire 911 call at link provided to grasp context and situation.
What is the significance of "I am sorry" in a "stand your ground" case?

Stephenson: I just killed a man.  I am sorry.

Dispatcher: What made you want to discharge your gun to hurt him?

Dispatcher: Alright. I need you to secure your weapon.

Dispatcher: Where is it now?

Stephenson: It’s on the ground right here. I am standing next to it.

Dispatcher: I’m going to keep you on the phone until the deputy gets there, OK?

Stephenson: Please send the deputy.  I will be waiting right here.

Dispatcher: We’ve got a deputy and EMS.  I need you to stay on the phone.

Stephenson: Yes, he did.

Stephenson: He pulled a knife out and he came at me like it was a stabbing motion, from about 2 feet away.

Stephenson: I was scared for my life, I can assure you. And before he did it at the right time, you can say, you can say, because he kept getting closer with his hand in his pocket, and saying, ‘I’m not leaving. I’m just talking a walk,’ I realized he was threatening just by coming close with his hand in his pocket.  I didn’t know if he had a gun or a knife. And then when he produced the knife, when he produced the knife and came a few feet from me with the stabbing-type motion.”

Dispatcher: Did he say anything to you at all?

Dispatcher: Did the man say anything to you?

Stephenson: I’m sorry. I couldn’t hear you. Could you please repeat it? Did the man do anything, what?

Dispatcher: When he pulled the knife did he say anything threatening to you?

Peter, I can't see the video or a link to it on my tablet - there is white space appearing where it should be. In case anyone else can't see it, I expect this is the one referenced, as the reporter remarks the husband is emotional, and that it is difficult to listen to:

For all his heaving, there are no tears - I think he is probably acting. I think it doesn't have to indicate guilt, as they were separated, and he may not have had positive feelings toward her for some time, yet is trying to come across as appropriately grieved at her disappearance. The firefighter forum comments would suggest he has had reason to have been angry at her, which might explain the distancing language - it's difficult to imagine it would not be a contributing factor. It's possible the firefighter comments may have caused her to commit suicide. I still don't know, except he is being cagey about something. Not being 'sure' where she is suggests he may have some idea as to where she possibly could be. If he has no idea, I would expect him to plainly state, 'I don't know where you are/she is'.

To whom are you referring, elf?

Ima,grandma - chilling - I listened to the 911 call - he is so calm for someone who just blasted a guy in the face, and body, however many times with a shotgun. It sounds like he initiated the confrontation - he should have stayed on his back porch, or gone back inside as he was instructed. Amazing that there is no charge, for anything - money talks.

That's a castellated lodge, not a castle.

That forum is eye-opening.
Firefighters used to be my heroes, some of them still are.
But those comments, and even a risqué photo of a woman and man in a county fire truck? wow
They need reining in.

What they wrote is (probably) illegal - invasion of privacy, publication of her personal/private information along with her full name and workplace - how malicious. They are mistaken if they think they are really anonymous.

Yes, I agree Juliet. He was daring the guy to the point of antagonizing.

I found this link re: Nicole the first day I read about her. It's probably one of the posters from the ff forum.
http://f2bbs.com/thread/52945

I don't know know much about this case as I basically have only been following the Blackburn case on SA. I do have to say it is refreshing to see a husband actually showing a bit of emotion. Quite different than stone cold Davey. Will study comments and SA more thoroughly now.

snipped:
The search Thursday in rural Madison County continued throughout the morning. In the afternoon, however, the state troopers rushed to the scene of the parking lot where Mittendorff's car was found. They gathered all-terrain vehicles to assist with the search.

Minutes laters sources told WUSA9 a body was found. Police have not yet confirmed this information.

There is a very, very grim and somber mood as state police and other personnel are gathered at the scene, Andrea McCarren reports. The area is roped off.

ABC7 said, "Police confirmed the body found this afternoon was Nicole's." ABC7 added, "Police say a suicide note was found in her vehicle."

I feared this search would end this way. I'm sad...

The husband maybe knew or believed it was likely she had committed suicide. It would explain why he seemed to know more than he was saying - though he may not have known, more suspected that is what happened, if it did - we can't know for certain before the cause of death is officially determined.

There will be some worried firefighters tonight - I hope Nichole's death weighs heavily upon those who published her personal details and trashed her, whether that was a contributing factor, or not. It's hard to imagine it did not cause her trouble and distress.

Ditto your thoughts Juliet. The backlash has begun in the Fairfax community. I expect a public and a private investigation. I know from first hand experience the rivalry between firefighters and policemen (Doctors are also involved in this little triad hellbent on seeking Power, Sex, and Greed; but that's another story) I wonder if that played a part in the deviant online behavior.

My heart hurts for her if I think too hard on it.

This story mentions that awful forum:

I smell rats. I think she was murdered.

I hope they investigate this further...the suicide thing just isn't resonating with me.