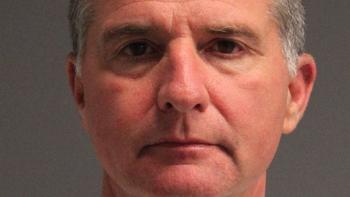 Was this posted on Facebook? I liken this opening salutation to a pleasant greeting heard by a 911 operator.

'Hi, folks' - he is informing people of who they are - 'folks' assumes a friendly, accommodating and receptive audience towards him, the trusted, authority Sheriff figure. He is trying to manipulate public reception of, and response to, his statement from the outset, by elevating himself above humble 'folks'.

There's a wife beater for you...refuses to back down, refuses to admit guilt, I'm sure it's all 'her" fault. Ugh

snipped:
The search Thursday in rural Madison County continued throughout the morning. In the afternoon, however, the state troopers rushed to the scene of the parking lot where Mittendorff's car was found. They gathered all-terrain vehicles to assist with the search.

Minutes laters sources told WUSA9 a body was found. Police have not yet confirmed this information.

There is a very, very grim and somber mood as state police and other personnel are gathered at the scene, Andrea McCarren reports. The area is roped off.

ABC7 said, "Police confirmed the body found this afternoon was Nicole's." ABC7 added, "Police say a suicide note was found in her vehicle."

I feared this search would end this way. I'm sad...

A transcript of the emergency call from Prince's Minneapolis compound shows confusion as an unidentified caller struggles to give the dispatcher the proper address.

Here is the full transcript of the 911 call from Paisley Park at 9.43am to the Carver County, Minnesota, Sheriff's Office:

Dispatcher: 911, where is your emergency?

UM: We have someone who is unconscious.

D: OK, does anybody know the address? Is there any mail around that you could look at?

D: OK, your cellphone's not going to tell me where you're at, so I need you to find me an address.

D: OK, get me the address please.

D: Concentrate on that.

UM: And the people are just distraught.

D: I understand they are distraught, but -

D: OK, do we know how the person died?

UM: Um, so we're, we're in Minneapolis, Minnesota, and we are at the home of Prince.

D: You're in Minneapolis?

D: You're sure you are in Minneapolis?

D: OK, have you found an address yet?

D: You're at Paisley Park, OK, that's in Chanhassen. Are you with the person who's ...

D: Carver with the transfer for Paisley Park Studios, 78.

D: We have a person down, not breathing.

Ambulance dispatcher: Down, not breathing.

D: We're going to get everybody, go ahead with the transmittal sir.

Ambulance dispatcher: Yea, Kayley, this is Shirley at Ridgeview. You can cancel anybody going to Aubudon, confirmed DOA.

Ambulance dispatcher: All right, thanks, bye.

The whole thing is open an shut case. Ron Bateman did assult his wife while drunk. Elsie Bateman did have broken blood vessels in her eye. The house was torn up while a minor was home. Divorce rate id 75% in aryland for law enforcemnt because of abuse and alcoholism. Elsie does not look like an ignorant mother yet she threw caution to the wind inviting these odds into her life and her childrens lives. Now Rons life is ruined her reputation is qustionable because of her recanted statement and all of this could have been avoided if she just stayed away. A comfortable life for your kids and a nice home is tempting but at what cost? They will lose everything now.