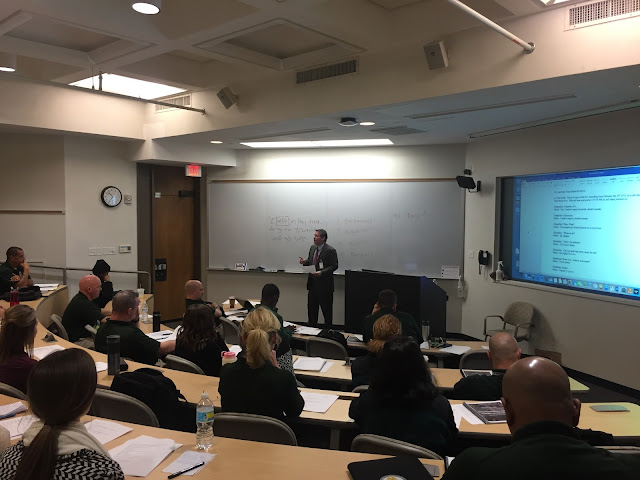 In the list of specialty advanced courses intended for 2017, one that may stand out of interest is on Mental Health and Language.

Can Bi-polar be discerned in the language?

Although this is not for diagnosing, nor is there any consummated marriage with the DSM (it changes with politicians' influence, as well as pharmaceutical underwriting), it will give examples of statements in which the subject's mental health status becomes apparent in general descriptive terms.

Is this subject likely to repeat this crime?

This will be limited to the most likely found in criminal statements, as well as statements within social services.

Such knowledge is invaluable to those who interview applicants in employment.

Can this person work well with others?

Can this person work around alcohol?

The analysis will not be diagnostic, but will rely upon general terminology such as, "narcissistic like" for the purpose of not only understanding the overall content and the subject himself or herself, but to suggest the best strategy and tactical approach to the interview and interrogation.

Click here for training opportunities in deception detection.
Peter Hyatt as Statement Analysis Blog at 9:38 AM

A prominent Atlanta lawyer who said he 'accidentally' shot his wife dead owed her $350,000 when she died.

Claud 'Tex' McIver owed the large sum of money to his successful wife Diane McIver, after he borrowed it from her company Clay Management Co. in 2012.

The 74-year-old was supposed to repay the amount with interest back by December 2014 but received an extension until 2017, according to court documents.

McIver was sitting in the backseat of an SUV when he 'accidentally' shot his handgun at Diane, 63, fatally injuring her in September.

He took the loan from his wife to build a $1.3million barn on the couple's sprawling farm in Putnam County, according to the Atlanta Journal Constitution.

The corporate lawyer said the loan was an idea from his wife, who said it would help with their taxes. He would write off the payments and she could claim it as income.

McIver, who turned himself in a few days before Christmas, is facing charges of involuntary manslaughter and reckless conduct for the death of his wife.

He posted his $200,000 bond on December 23 and was released from Fulton County jail with an ankle monitor.

He is prohibited to be in possession of any weapons, to have any contact with the friend who was driving the car when Diane McIver was shot, or with anyone at Diane's company, according to 11Alive.

The news of the debt to his late wife comes shortly after McIver held an estate sale of Diane's wardrobe looking to raise $350,000 to cover bequests in her will.

The sale was promoted as 'a fashionista's dream closet' and contained designer clothes, furs and accessories.

Of the 121 fur coats in Diane McIver's closet, one by designer Thierry Mugler still had a $6,800 price tag attached to it.

The estate sale also includes more than 500 pieces of fine Italian and French costume jewelry, leather and suede jackets, evening gowns, as well as 'cruise wear’ and even ski apparel.

McIver, a member of the American Bar Association's Standing Committee on Gun Violence, insists that shooting on September 25 was a terrible accident.

Speaking of his innocence, he told the Atlanta Journal Constitution: 'I absolutely did not. She was my life partner. My life as I know it is ruined because of this accident.'

McIver has passed a polygraph test conducted by an examiner who was hired by his attorney, Stephen Maples, reported the station CBS46.

Richard Rackleff, who conducted the lie detector test, said that McIver replied, 'no,' to all three questions, and that the polygraph did not register that he was lying.

Rackleff said McIver appeared to be overcome with grief and cried several times while undergoing the test.

Maples told the AJC that he is baffled by the charges that have been filed against his client, insisting that the husband's actions were not reckless or negligent.

'We’re very, very disappointed,' Maples said. 'We feel it was an accident. Hopefully the grand jury would dismiss it when they hear the evidence.'

The polygraph expert also revealed that in his conversation with McIver prior to the test, the man told him that on the evening of September 25, he was dozing in the backseat of his Ford Explorer SUV when he woke up with a jolt, causing the gun in his lap to fire.

Mr McIver then asked his wife to take the gun out of the center console and hand it to him for protection.
His wife was riding directly in front of him, and the bullet from the revolver struck her in the back, leaving her mortally wounded.

McIver's attorney told the AJC that the reason his client had the .38-caliber revolver in his lap in the first place was because earlier in the evening, as he and Diane were ridding home from their farm in Eatonton, they saw a group of people approach their vehicle.

Mr McIver then asked his wife to take the gun out of the center console and hand it to him for protection.
The husband placed the gun in a plastic grocery bag in his lap and fell sleep. As the SUV was passing by Piedmont Park, Claud McIver abruptly woke up.

Describing that fateful moment to the paper, Mr McIver said: 'I lurched and the gun fired. I must have forgotten it was in my lap. I saw a flash.'

The widower told the paper he is consumed by grief and guilt, and his only desire is to join his wife.

Mark Guilbeau, an investigator with the Fulton County Medical Examiner's Office, told The Atlanta Journal-Constitution that 63-year-old Diane McIver's cause of death has been listed as homicide — the death of a person at the hands of another.

In early October, Bill Crane, a friend of the Atlanta couple acting as a family spokesman, told the paper that Claud McIver had retrieved his handgun, a .38-caliber snub-nose revolver, because they were concerned about unrest in Atlanta related to the Black Lives Matter movement and feared of getting carjacked.

Crane also told the paper that the revolver was in Mr McIver'a lap when their 2013 Ford Expedition hit a bump in the road and the weapon accidentally discharged, killing Diane.

‘It was a tragic accident,’ he said.

Atlanta Police Sgt Warren Pickard later called into question Crane's account of what went on inside the McIvers' car that night, saying that the friend 'wasn't in the car, so he is not a witness to what happened.'

In an earlier interview with WGCL, Mr Crane had said that the handgun fired as Claud McIver was taking it out of a plastic shopping bag.

Diane McIver was president of Corey Airport Services, a successful Atlanta-based marketing company where she had worked for more than 40 years.

Her husband is a partner in the Atlanta office of Fisher Phillips LLP specializing in labor and employment law. He is also a vice president of the Georgia State Election Board, and as of August, a member of the American Bar Association's Standing Committee on Gun Violence.

The fatal incident took place at around 10.40pm on September 25 as Diane and Tex McIver were riding in the 2013 Ford Expedition from their sprawling farm in rural Putnam County to their apartment in the Buckhead section of Atlanta.

The SUV was riding along Piedmont Avenue, past Piedmont Park, when Claud McIver became concerned about carjackers after seeing some people make their way towards their SUV and asked for the gun.
McIver is a member of the American Bar Association's Standing Committee on Gun Violence

After the shooting, Diane was rushed to Emory University Hospital, where she succumbed to her injures shortly before 1am Monday.

An incident report made no mention of any other occupants of the Ford SUV other than the victim, but Mr McIver said the driver of the vehicle was a close family friend named Dani Jo.

'This is one of those situations we’re working through very slowly,' police Sgt. Warren Pickard said. 'We want to get it right.'

‘Diane was a vivacious, beautiful, entertaining woman who was a lot of fun to around,’ Putnam County Sheriff Howard Sills told the station 11Alive.

The sheriff described Tex McIver as distraught and grief-stricken over his wife's death.

A prominent Atlanta lawyer who said he 'accidentally' shot his wife dead owed her $350,000 when she died.

Claud 'Tex' McIver owed the large sum of money to his successful wife Diane McIver, after he borrowed it from her company Clay Management Co. in 2012.

Tada, and now we have a motive.

For some reason this article gives me a feeling something isnt right......
Quote
'Not sure who that nasty close friend of George but i was in relationship (sic) with george micheal till i found him dead in bed.
'The only thing George wanted is to DIE. He tried numbers of time to kill himself many times...
'And finally he managed...'

Meanwhile, heartbroken Fadi released one of the singles from never-before-heard 1990s album Trojan Souls on Twitter.
He also has revealed he fell a sleep in his car.

Could here be more that meets the eye?

I have been wondering about the mental health side of statement analysis... I have heard the terms "psychopath"and "sociopath" often, and I have been wondering if the potential for a person to truly fit those definitions ever becomes apparent or discernible in language during an interview.

I dunno...study Scott Petersons interview with Diane Sawyer.
The one I know personally tries to portray themselves as "saintly" which I dont think the normal person does in language. I think Peterson might do that a bit in his interview when he says he and Lacy's relationship was...I cant remember the word....but it was a very odd word like "sublime"...they do that...try to portray themselves as "beyond perfect". I also read they use lots of "ums"...I notice that in the language of David Paine (he is most likely a psychopath) and I think Peterson does it too.

Hello All. Could someone please analyse this -

“I went round there to wake him up and he was just gone, lying peacefully in bed,” Fawaz said. “Everything had been very complicated recently, but George was looking forward to Christmas, and so was I.”


"ITs a xmas i will never forget finding your partner dead peacefully in bed first thing in the morning.. I will never stop missing you xx" (— Fadi Fawaz (@fadifawaz) December 26, 2016)

"I went round there" rather than saying to his home.
Why does he need to say WHY he went there, it was Xmas Day, it is usual for friends to visit. He reasoned "to wake him up"???

‘We were very much in love, very much together,’ he told the Mail. ‘Why would I be there [in Goring-on-Thames] if we weren’t together? I was there the last day of his life. I was there.’