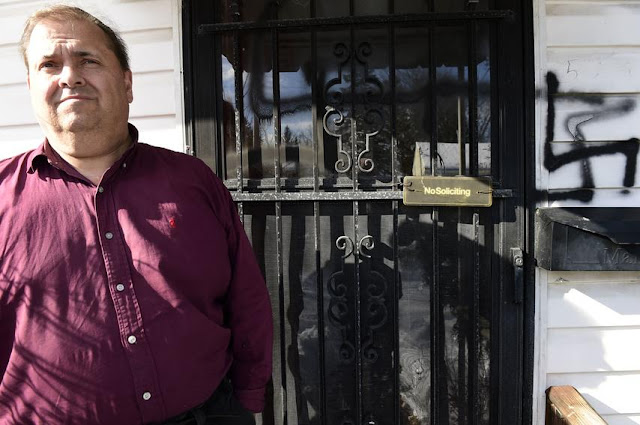 Andrew King reported a swastika was painted on his home.  Here are some quotes:

"Just a vein of fear went right through me," said King, 54, a devout Jew who said he is almost always wearing his yarmulke when in and out of his home. "All that history attached to that Nazi symbol."

With powerful emotion, we look for sentences that begin with the pronoun "I" to score higher on reliability.

King said he has never experienced any anti-semitism in the neighborhood.

"It's pretty quiet," King said, as he took a break from preparation for Friday's observation of the Jewish Sabbath. "I don't ever hear any noise. It's a well-kept, clean neighborhood."

The media sought to link him to politics.  This appears to be in response to questions:

"I'm a strong advocate of Mr. Trump's politics," King said. "I am a strong Conservative. I do not point the finger at Mr. Trump. Mr. Trump is basically an honorable man."

It appears from his answer that he may have been asked questions in an attempt to link the swastika to Donald Trump.  The article suggests as much.

King said if the vandals wanted to get political, they should have spray-painted the image of a donkey -- the Democratic Party's longtime symbol -- on his house.

This should have been reported in a quote; it is not. It appears, even without a quote, he may have taken the bait.

King, who said he is retired on disability, said he also felt anger when he saw his damaged home. "I just wanted to put my hands around their necks," he said.

Next, we get his agenda.

Consider the swastika to a Jew is a threat.

A threat that is on one's own home is intrusive.

Home is where we sleep; our most vulnerable time in life.  The language should reflect this personal, intrusive threat.

"This can show people who thrive on hate, in my opinion, that love trumps hate in the long run," King said. "I will consult with the religious community and see how long we should leave them up, Jewish, Christian and Muslim.
"Things happen," King also said. "My father used to say, 'Only the strong survive.' You have to have a certain amount of strength in this world to survive. Otherwise, life is going to be very difficult."

Andrew King has been arrested for the false report.

Media reporting that he may not be Jewish.
Peter Hyatt as Statement Analysis Blog at 1:58 PM

"If the vandals wanted to get political they should have"

This statement jumped out at me. Mr. King made his statement impersonal and soft by minimizing and revealing an understanding of the "vandals."

What is the motive here?

He is a Trump supporter, so was it to infer how "bad" liberals are?

Mr. King's lawyer says that he is schizophrenic. The local Rabbi says he has behavior issues, so he is not welcome in the Jewish congregation, so he concocted this hoax to bring shame on the community.

Revenge and contempt are possible motives.

Her initial police statement would be interesting to read, re SA.

Texas teen admits she made up hoax claims about abduction, rape by 'three black males'

. "I just wanted to put my hands around their necks," he said.

Is he really meaning the rabbis' necks?

Again !!!
The London attacker was 'known to authorites'before the rampage.

"The London attacker was 'known to authorities' before the rampage".

I guess it is easier for the government authorities to apologize to the citizens and the victims' families than risk being humiliated by those who support violence and killing.

Government security agencies who are being manipulated by the fear of being called 'phobic' should have their strings clipped from from their puppet masters who hate them.

I'm exceedingly grateful that Andrew King was arrested for his Fake Hate crime. In this technology-driven, soundbite age, such crimes need severe penalties. By the time, the "crime" is fully investigated and the perpetrator arrested, the damage is already done. It is a form of terrorism to the ethnic group, believing itself to be targeted (not to mention the fear it creates among other community members believing someone dangerous and evil is in their midst).