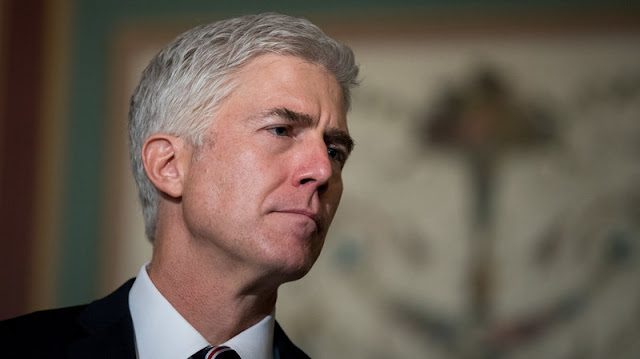 Attorney Jennifer Sisk sent a warning letter claiming that Judge Gorsuch was "sexist", making him unfit for the Supreme Court.

Here is the portion of the letter about "what happened", allowing us to analyze to learn:

Is Jennifer Sisk telling the truth?

[Gorsuch]"He asked the class to raise their hands if they knew of a female who had used a company to get maternity benefits and then left right after having a baby. Judge Gorsuch specifically targeted females and maternity leave. This question was not about parents or men shifting priorities after having children. It was solely focused on women using their companies.
I do not remember if any students raised their hands, but it was no more than a small handful of students. At that point, Judge Gorsuch became more animated saying “C’mon guys.” He then announced that all our hands should be raised because “many” women use their companies for maternity benefits and then leave the company after the baby is born."

Here is the letter with emphasis added:

He asked the class to raise their hands if they knew of a female who had used a company to get maternity benefits and then left right after having a baby.

This sentence is straight forward and is statistically reliable.

Here, she introduces his name and gives us an unnecessary sentence.  When asking if anyone knew of a "female" the question is about "females";

Note the choice of language:  "targeted."

If asked a question about "does anyone know of a man who...", the focus is upon the specific male gender.
Note the word "specifically" as unnecessary.  Unnecessary words are deemed very important in analysis.  This falls under the category of "attempt to persuade" that belies weakness.

Q.  How could it be "attempt to persuade" since "female" is designated by both the question and the author's response?

A.  Asking "mothers" already specifies "female."  This makes it unnecessary/redundant, but also logically unnecessary.  The author's "over-emphasis" tells us more about herself than it does the gender of "mothers."

1.  Our background
2.  Our experiences
3.  Our priority/motive
4.  Our personality traits (including possible disorders/mental health)

The word "specifically" seeks emotional, rather than logical response.  She is targeting female audience, while actually showing contempt for them presupposing that they would not know that "mothers" are "female" without her emphasis.

This speaks to personality traits, including manipulation within a personality.

a.  To address this focus is redundant.  As unnecessary information, it is, to the analysis, always very important. In this sense, 'the more unnecessary, the more important' stands.

b.  The focus or topic is called "target" by the subject, specifically in an unnecessary sentence.  We should ask why she chose this word in this context where it is redundant.

That this is "repeated" and it is "unnecessary", the analysis indicates an elevation of importance of "targeting."

One should consider if the subject is projecting here.

This question was not about parents or men shifting priorities after having children. It was solely focused on women using their companies.

a.  This is unnecessary as the question was about women.  She now repeats the same theme, also increasing its importance to her.  This is how one reveals oneself; through the words chosen.
b.  The Rule of the Negative

She now elevates sensitivity by telling us what he did not "target" in his question about women:  men.

The topic of men, or "male" should be considered very sensitive to the author (subject) of the letter.

That she revisits redundancy (repetition) within an unnecessary statement, combined with the rule of the negative further heightens sensitivity.

Truthful people tell us what happened, with repetition indicating importance.  Unnecessary repetition, within the negative, suggests further why the word "target" was employed.

We should consider that this event (the question by her teacher) is very important to the author, leaving an impression upon her.  With the opening sentence being statistically reliable, we must now learn why such a question would leave a powerful imprint upon memory.
I do not remember if any students raised their hands, but it was no more than a small handful of students.

Here, she tells us what she does not remember (rule of the negative) followed by the word "but", which minimizes or negates that which preceded it.

We now understand the projection suggested by the word "target" by the author.

The event that left such a powerful impression (repetition) now leads to open statement discrepancy.

The event is not coming from experiential memory.

Truthful people rely upon the strength of their testimony.  Here we have the need to persuade enter by the editorializing of the demeanor of Judge Gorsuch.  It is interesting to note where he is "he" and where he is "Judge Gorsuch" in the author's language.  This is also unnecessary repetition and violates the "law of economy."

Once introduced, Judge Gorsuch will likely become a pronoun and/or a shorter noun.  That the author feels the need to use the title and last name is unnecessary emphasis.

He then announced that all our hands should be raised because “many” women use their companies for maternity benefits and then leave the company after the baby is born.

He is no longer speaking or telling, he is "announcing" in the editorializing.  She does not attribute any quote nor near quote.

Jennifer Sisk shows particular sensitivity towards males.  This should be explored for personal issues.

Jennifer Sisk shows motive of agenda in her deception.  There is not enough sample here to know if motive extends beyond anti-male agenda onto self promotion (national stage), politics, etc.

Jennifer Sisk's use of editorializing language shows experience with deception as well as a willingness to use deception on a large stage.

She uses diversion in that she does not challenge the question but tells us what he did not do.  This is also a habitual technique that deceptive people use.  She attacks him not for what he said, but for what he did not say.  It shows sophistication in deception employment.

Jennifer Sisk would not pass a polygraph employed with her own words.

Peter Hyatt as Statement Analysis Blog at 8:30 AM

Clarence Thomas all over again.

I wonder what her grade was in his class.

It's interesting that she was a former staffer for Democratic Sen. Mark Udall of Colorado and the Interior Department during the Obama administration.

More of her quotes...
"I had no interest in having him stop teaching. I did think he was a good professor. But my interest is more with having someone talk to him and explain to him why he shouldn't be making these comments in class, why he needed to understand what the state of employment law was, and why it was problematic for him to express this view of employment law to a class full of students."

"It seemed to me [discrimination] was in the past," Sisk said. "So I was surprised sitting in this class, hearing this in April of 2016, and thinking that even a professor that I respected, that I see as so bright, so well-versed in the law, could also not only hold these views, but was so comfortable expressing them to a room full of law students, including female law students that he the same semester had offered to mentor."

Sisk, once a staffer for former Democratic Sen. Mark Udall of Colorado and the Interior Department during the Obama administration, told NPR that she wrote the letter "so that the proper questions could be asked during his confirmation hearings," which begin Monday before the Senate Judiciary Committee.

Another student in the class has disputed the account in a letter to the committee, and several women who worked for Gorsuch as law clerks have stepped forward in his defense.


This characterization is being disputed by Will Hauptman, a current law student at the University of Colorado. Hauptman wrote a letter to the Senate Judiciary Committee with his account on Sunday.

"Although Judge Gorsuch did discuss some of the topics mentioned in the letter, he did not do so in the manner described," Hauptman writes.

He continued, "The judge was very matter-of-fact in that we would face difficult decisions; he himself recalled working late nights when he had a young child with whom he wished to share more time. The seriousness with which the judge asked us to consider these realities reflected his desire to make us aware of them, not any animus against a career or group."

A group of 11 female former law clerks for Gorsuch also submitted a letter to the committee in support of the nominee.

This is another "fake" report by a person with an intolerance for those with opposing opinions.

Thank you for getting to to the truth.

Liberal democrats, who like to throw the intolerant label so swiftly and so often, are the most intolerant people on earth.
Believe what ever you want to, but please, allow me to do the same.

I believe it was Schumer who urged a vote Against Gorsuch by saying that none of his interview answers led him to believe Gorsuch would stand up to Trump.
I thought SCOTUS was in place to uphold and defend the Constitution as it was intended.
There is no room for SCOTUS to be a Political arm of the Balance of Power.