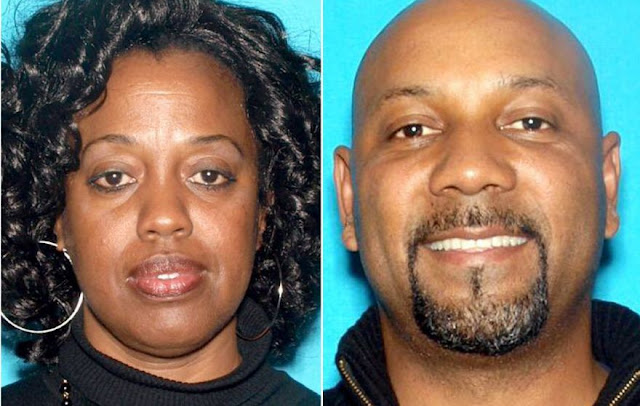 At gun free zones those inclined to obey laws are juxtaposed against those who don't feel the necessity of law keeping while intending to commit crime.  There is no possible defense that law keepers can employ.  Murderers do not respect laws, including gun laws, court orders of protection, or even minor laws.  It is to reveal a mindset that does not yield.

Courts and child protective services will use coercion with a woman who has children that are exposed to known violence, including the possibility for losing custody.  The impact of violence, even witnessed, by children, remains largely unknown.  What is known, however, is devastating.

In screening for violence, we look for both self-restraint and human empathy in competition.  Training for both begins in early childhood, while the lack of both is to increase risk to the vulnerable.  Statement Analysis is used for specific screening of law enforcement potential hiring, as well as in business.

That the San Bernandino man shot children before committing suicide also gives us insight into his mindset. The lack of empathy is striking as the children shot posed no risk to the subject.

Media has focused in, interestingly enough, on his Facebook posts.

The themes found in his posts and video indicate a principle in Statement Analysis that is used in both deception detection as well as in profiling for the purpose of identifying anonymous authors.

We look for hyperbolic or dramatic language which can suggests the need for persuasion, rather than truth itself.

It is similar to others, such as the "Great Mother" principle highlighted in the murder of Hailey Dunn.  This is where mothers who claim greatness are often associated with child protective services regarding abuse and/or neglect. We find this consistently within intake statements at methadone clinics where babies have been born withdrawing from drug abuse, with bodies twitching in pain.

In a statement where a parent, for example, writes,

"I put my baby to bed, told her, "I love you" and then I..." we often find what provoked the quote, "I love you" is something amiss, such as poor bonding, or even child abuse.

We all tell our children that we love them, but it is in the necessity of making a public declaration that we find a pattern.  Those who have been accused of child abuse or neglect, may find it "needful" to add this into a statement, including a statement written to police investigating a domestic crime.

In identifying anonymous authors, we consider "the opposite effect" where one uses masking to attempt to conceal identity.  For example, in a recent anonymous author identification, the author attempted to use "black urban speak" which revealed not only his race, but helped date him.

Scott Peterson told media that his marriage was "glorious" to Stacey, after he had both killed her and was involved in an affair with another woman.

We have seen hyperbolic or dramatic language to often indicate the opposite.

Those whose marriage are in trouble will sometimes signal this by telling us, often repeatedly, how great their marriages are.  This is why we highlight both dramatic language, along with sensitivity of repetition.

This does not mean that someone that posts on Facebook that they are happily married means they are headed for divorce.  However, when you see a pattern of repetition or are under a barrage of someone trying to convince you of just how happy they are, consider the existence of the need to persuade rather than report truthfully.  We sometimes highlight that the subject has an acute need to persuade himself or herself of such.  It is very sad.

When the Hailey Dunn case first broke, I was sent a transcript from Facebook in which a husband and wife had posted  that my analysis was  hurting the feelings of the mother, her boyfriend, but especially, the ability to find Hailey, whom, they said, was kidnapped.

They wrote from different locations (him quoting that he was home and she was at work) and while posting about me (not the analysis), they frequently told each other how much they loved the other, and how wonderful the other was, publicly, in the midst of writing about a murdered child.  In analyzing the transcripts,  I noted the need to ridicule was secondary to the need to show the public how "wonderful" their marriage was.  "I love you, Babe!" for all to see, met with, "You're the greatest lover, Babe!" (signaling something to the contrary there).

Cedric Anderson had a history of domestic violence and drug charges before his marriage to Karen Smith, 53, a teacher at North Park Elementary School in San Bernardino.  He had written how "wonderful" his marriage was addressing not his wife, but the public.  This "need to persuade" is vital in understanding.

"I love being married to Karen Smith-Anderson!" he posted on Feb. 27 with a video. Why the need to post this publicly?  Note the statement as unnecessary, with the focus not upon her, but upon his own happiness.  Note the exclamation point as well.
Video:
"She knows when to ignore me," Anderson said with a laugh. "Well, it makes a happy marriage."
Here he reveals that so early in their marriage, his wife had a need to ignore him, suggesting that what he said or did was harmful to her and to protect herself (in any case), she had to feign as if he did not exist.  If he does not exist, he cannot harm her.
I am reminded of the strong use of manipulation that exists within domestic violence where no outward violence exists.  The control often comes from threat but also in manipulation and wearing down the victim.  Listen to the additional wording:
"After watching Greenleaf with my wonderful little wife. She finally understands me and why I feel the way I do about many Black Churches and so called Pastors," Anderson wrote in a March 14 post.
Here he shows distancing language as seen in the word "with" and here she is not ignoring him, but he tells us that an elapse of time was necessary for her to "understand" him, with the word "finally." He sets himself up to criticize others (here, specifically "Black Churches" and those he does not recognize as legitimate pastors. Given his history of violence before the murder, this is particularly note worthy.
"God's people are their slaves, servants or just some thing to use."
I believe him, and Statement Analysis teaches:  believe him.  He called himself a pastor and here he may be giving insight into not only professional envy, but a desire to exploit others for personal gain.
The greatest increase in danger for the woman is in the critical period after she breaks free.
Breaking free from the control of a narcissistic manipulative controller is to bring humiliation to the subject.  Remember:  his posting were public.  This was about him, and his image.


"He had other motives," the victim's mother said. "She left him and that's where the trouble began. She broke up with him and he came out with a different personality. She decided she needed to leave him."
Ignoring him did not suffice.
The language reveals the quality of the relationship, the need to control, the focus upon self, and with hyperbolic and/or dramatic language, the potential for divorce.
What is missing in the language is the trigger.
The most powerful (and frequent) trigger is humiliation. Sometimes, even the passage of time will not assuage the inner rage of humiliation.  Consider if someone has insulted you, many years ago, and even today you may think to yourself, "I should have said..." in response.  Humiliation is a powerful element.
For Cedric Anderson, who's postings were public, Karen's leaving of him may have been that final trigger of humiliation.
In reviewing statements of OJ Simpson, there was "too much leaving" for him to bear.
In false rape allegations, we often find, at the very end of a statement, the "leaving" of the accused in which the subject's humiliation is the motive behind the false rape allegation.

Our analysts are from law enforcement, security, human resources, psychology, journalists (increasingly bloggers are enrolling), attorneys, writers, business professionals, and other professionals who need both information and discernment.  They are from the United States, Canada, England, Ireland, Scotland, Germany, France, Australia, Russia, Netherlands, Switzerland, Denmark, Serbia, South Africa, and elsewhere, with some studying in English, while working to translate principle into their native language.
We also hold monthly live trainings at Go To Meeting, as well as certification and Advanced Statement Analysis Course offered only  to those who have successfully completed the Complete Course.
Visit Hyatt Analysis for more information and to register  for training.
Keep an eye out for upcoming lessons, including Video Lessons, on:
Employment Analysis
Anonymous Author Identification
Ransom Note & Threat Assessment Analysis
Psycho-lingusitc Profiling

Some time ago, your search engine was changed. It can no longer search comments after articles, but only articles themselves.

The search results are also presented differently, making it much more time-consuming to sift through results.

I can "find" phrases in comments after articles are pulled up, but not through your search window.

If that could be fixed, it would be very helpful.

The reference to declarations of love on FB brought to mind the phrase, "I love this game". When golfing, I'll utter it through gritted teeth when a stroke goes badly. The phrase helps vent the spleen without turning the air blue.

Peter- Thanks for breaking this down. I thought it was kind of odd and somewhat ominous that Cedric linked his wife "finally understanding" him with his criticism of "Black churches and so-called Pastors". They hadn't been married long enough to normally have a "finally understanding" issue.- that signaled troubled relationship. I was very surprised to hear a black man verbally equating "Black churches and [their] so-called Pastors" with slavery. Whoa. To me, that evidenced a deep anger (hatred even) for those churches and pastors, making me wonder what Cedric's issues had been with specific Black Pastors. I was unaware that Cedric called himself a Pastor. That he went from servant, to slavery, to "to just some thing to be used" was alarming...particularly coming from a black man. For a black man, born during the Civil Rights Movement, the jump from servant to slave should have been sensitive. From slave to "just some thing to be used" is remarkable. I wonder what his definition of slave was, if not just some thing to be used.

Thinking about what you said regarding Cedric being a Pastor and his need to criticize other "Black churches and so-called Pastors", while calling himself a Pastor, and professional envy. Would that also apply to Davey Blackburn as he disparages other, far more successful, local Churches as "boring Church"? Is that why he disparaged father-in-law Phil Byer's far larger Church as "dry bones"(implying they are spiritually dead), while he trumpeted himself as the new Elijah breathing new life into them (with his Amanda died so that the Church might live spiel? He's given best bud Kenneth Wagner a few similar backward compliments on his Dover DE Church as well.