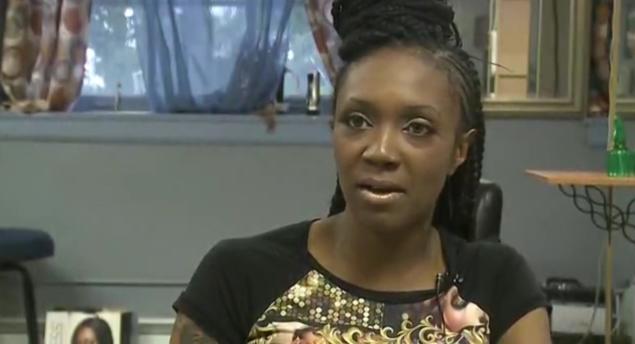 Is this a truthful statement about reality?

Ohio woman says truck is burned after she gets racist letter: 'We don’t want you here black b----'

An Ohio woman is in fear of her life after she received a racist and threatening letter, and her truck was mysteriously torched.
Nicole Rhodes, 40, said she had been taunted by bigots in her Youngstown, Ohio, neighborhood for about three weeks, when she first saw a menacing note taped on her beauty salon.

"We don't want you here black b----," it read. "Don't get burnt up in there."
Then on Monday, she watched in shock as her 2006 Ford pickup truck was engulfed in flames on the same property.

Is she telling us that this is not "real"?

Rhodes has owned the building for about three years, but she's in the process of selling it and moving her business, Dynasty Salon, she said.
The emotional mother of four said she didn't take the letter seriously at first until her truck was set on fire.

"I thought it was nothing. My neighbors are prejudiced," she said. "I'm used to people hating me — but now it's because of my skin. It's the same kind of hatred."

Note that she claims that she is "used to" people hating her.  What caused people to hate her?
She then says that "now" (time) it is because of her "skin" and it's the "same kind" of hatred.

The word "but" refutes or minimizes that which preceded it. In this case, she claims:

1.  She thought it nothing
2. Her neighbors are prejudiced

This is then refuted or minimized with the word "but" to be in comparison to:

It is the same kind of hatred that she just rebutted.

"There's something going on," he told the local news station.

Yes, there is something going on , and yes, someone did touch the vehicle on purpose.  His short statement is interesting as it does not commit to a criminal element.  He may have suspicion about Ms. Rhodes.

There have been no arrests or leads in the case yet.
Rhodes has put up 16 surveillance cameras on the property and been distancing herself from the community, she said.
"It has to be that serious," she said.

Note the missing pronoun regarding "burning" and the minimization of "that ain't cool."

It is a crime, it is a dangerous crime and it is an expensive crime.  It is anything but "ain't cool."
One might question why she uses such soft language.
Peter Hyatt as Statement Analysis Blog at 3:00 PM

Rhodes has owned the building for about three years, but she's in the process of selling it and moving her business, Dynasty Salon, she said.

Perhaps no one is buying her salon and she's in need of some insurance money...?

I hope that this isn't another insurance scam...that ain't cool.

Leakage? The last sentence makes as much sense as a perp as it does as a victim.

Any bets she is having problems selling her property?

Has she had business problems?

Why would people hate her prior to this alleged crime?

Is "ain't cool" expected language here? No. It sounds like she is interested in her image as a "cool person", and, if the perp, distancing herself from the action.

Also, she could have said, "burning a truck up and threatening a family -- that ain't cool". But she used the possessive pronoun -- "my truck", "my family". This indicates she is thinking of herself here. Which tilts the odds towards her leaking guilty knowledge, that it was she who torched her own truck.

Furthermore, the threat was against her, not her family. "Threatening me" is therefore the expected. Instead she broadens it to "threatening my family". Not sure what this indicates. Unless it is leakage and the real threat is bankruptcy or something which would be a threat to her entire family.

I'm noticing her use of "serious" three times.

"It just cannot be this serious."
This sentence is all messed up.
She doesn't tell us what "it" is.
"Just" shows she has a comparison in her mind...possibly it can rather than cannot.
"Cannot" is in the negative and speaks to ability. It's not reliable.
"This" brings serious close.
This is almost like doing dreaded algebra. Lol. "This" is close - cancelled out by the negative "cannot" - brought back to close by "just". Whew.

"Black skin just can't be this serious."
The exact sentence, but she replaced "it" with "black skin."
I think she's saying it isn't serious (note can't be rather than can't be taken) but with her "just" her mind says maybe it is.

Once she put up cameras and distanced herself from the community, she now says,
"It has to be that serious."
Now rather than ability and negativity (cannot ; can't) she speaks in the positive and uses a being verb.
She is no longer close to serious, exchanging "that" for "this."

What does it mean? Help??

Interesting that the "note said "Don't get burnt up in there" and she says of her truck "Burning my truck up...".

Maybe it's a colloquialism, but here we don't tend to describe fire damage as burnt "up" or burned "up". The building or house burned down, the person was burned, the truck burned. We might say "burning my truck". I'd be interested to know how the locals talk there.

If her shop's been for sale for a while, then clearly she was in the process of leaving the neighborhood, so why torch her truck now? If her neighbors had that much animosity toward her, the property would have damaged (and likely repeatedly) a long time ago= police reports. Typically, there would be a record of escalation. Moreover, the damage would have most likely been directed at her livelihood rather than her vehicle.

So, why the truck? Trucks don't have security cameras, but businesses often do (inside at least). Easier to torch your own vehicle than your place of business? It's a little harder to hide arson with a building fire from the fire department/an insurance investigator. I'd be subpoenaing bank account transactions(personal & business), insurance records, credit history,cell phone records (specifically texts),social media postings (looking for preponderance of black victim mentality) as well as interviewing friends/family/neighbors/customers and former neighbors/co-workers (per her comments about being used to "being hated").

I'd be curious to know what the black:white ration is in her town and the incidence of racially-motivated crime is in the town?

The unpleasant truth: Our politically-correct, racially divided, radically divided society has spawned a number of low-life "activist" perpetrators who are more than willing to destroy their own property and someone else's reputation for their "cause". They have Crusader Syndrome. In their mind, they're championing their cause and the end justifies the means.

FoolsfeedonFolly....I'm an Ohioan and yes, people say "My truck got burnt up, burned up....my house was burnt up/burned up so I expect that is expected language. Southern Ohio, Youngstown, Steubenville is rough. Youngstown has lost population and has one of the highest crime rates in the country. Both the above towns used to be bustling steel towns but now are just vacant, dirty, high poverty areas that came with the deindustrialization of both cities when the steel mills shut down. Youngstown was always racially divided and it was common to say "westside White" which was due to blatant redlining. Blacks made up roughly 25% of the population but 75% of the relocated due to poor urban renewal planning. They lived in ghettos. There were racial riots in the late 60's and thru the 90's the mafia ran the town. Everyone I know avoids Steubenville and Youngstown area because of crime. Police, LE were notoriously corrupt. I think the mafia finally got ran out of town in the late 90's or so by the FBI. I personally knew of an Italian mafia family that ran a pharmacy and when black children would come into the store he would make them stand there while he sprayed them with Lysol before they could touch anything. Disgusting. With that, the crime itself is believable for that area but her language suggests otherwise from Peter's analysis and I agree. She puts way to much emphasis on her skin, black color, three is the liars number, etc. If she did torch her own truck for insurance money, she did it in an area where racial divide is common and believable.

Foolsfeedonfolly- your last paragraph hits the nail on the head. Even if she is guilty and busted, people will still stand up for her.

I saw the best meme.

Was a photo of Al Sharpton

The top said "your dam right it's racism"

Then the bottom said "wait, what are we talking about"

Racism is being used as a tool now days. It's no longer about racism (at least in most of these cases) but about people trying to take advantage and get something for nothing. Al being the gang leader.

It's a shame that my first reaction now when I see these headlines is to roll my eyes. It's just taking away credibility from an true cases.

Lynda- Thank you for filling me/us in with some background information. I feel for the people of Steubenville and Youngstown...not a good legacy to have to live with.

We all bleed red and breathe the same oxygen...we owe each other mutual respect. No one should be mistreated because of their color; black, white, or any other shade. Likewise, no one should use it or the past as a means of entitlement,retribution, or revenge either.

I have both white, black, and Native American relatives in the mix. Pride in your roots is one thing, but pride should never divide.