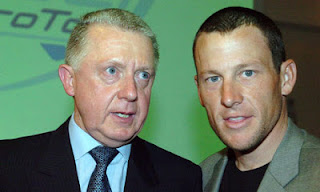 When someone has "the real truth", they have other forms of "truth" as well.

Lance Armstrong continues to deceive, including about his ex wife and about not doping on the comeback Tours.

Years of lying has been seen in Statement Analysis under the "Unreliable Denial" as well as various deceptive indicators.

He highlights for us several things:

1.  He attacks those who challenge his lies;

2.  He employs passive language to separate himself from responsibility

3.  Critics say he appears unrepentant and wooden.  He is.

His smirk as well as his "Who cares?" attitude towards those he has slaughtered did not help his public relations.

It did not bother me that he said it did not bother him that he used.  This was the expected.  He was working hard, using his own blood, and can justify this by saying, "this is the only way to compete" but when it came to the shredding of those who's lives he threatened or destroyed, his attitude was the same.

We will have to see if Nike cares.

This was obviously scripted and it is a shame that he was allowed to not comment on certain things, particularly those who have stood up to him.

He chose someone to interview him for the purpose of manipulation, but Oprah did her homework.  She did allow him to get away with some things, while kept up on others.

It is one thing to lie, but it is another thing to attack those who tell the truth.  He lied about his ex, his kids and the timing of his 'confession."

This was a two part narcissistic display of continued deception, via spin, minimization and passivity.


Peter Hyatt as Statement Analysis Blog at 6:17 AM

"It is one thing to lie, but it is another thing to attack those who tell the truth."

Ain't that the truth, and yet people have the balls to do it.

It is the status quo these days in America. How I long for the better days we knew. The youth today will never know anything about that, that respect for truth was a reality once, and it was great.

Who knew we could lose it as a nation and so quickly, and all so we could say symbolically, "We hav e a black president!" No matter that he was a man with no character.

Which leads me to believe, it wasn't about race at all, but letting an evil man slip by. It was the only way he could slip by, being a minority. There were so many better black men we could have chosen if the real reason he was elected was to prove we were not racist.

There is much self deception going on in America today.

he will not come clean till he comes clean with himself

What makes me so angry is that the honest people that trained were cheated by this drug infested pos! Oh for 7 yrs? he is a disgrace to any Athlete in any sport. Maybe he can hang with Mark Mcquire, Barry Bonds,and the rest of these morons to many to count. Hank Aaron is the homerun king and always will be until someone can beat his record with their own body and mind and NO DRUGS!

that made me laugh Sidewalk Super @ 7:42

NY Times analysis hits on many of the same point !

...Really do hate to say this, but he Does seem to be held to a higher standard for
A. Keeping the Secret longer than the other cheaters...
B. Outing only himself & not throwing other cheaters under the bus to make deals for lesser penalties
C. Being the most well-known name with the most success

The bigger they are, the harder they fall.
He knows he's still an arrogant pr%*k. He doesn't know how Not to be one - it is his Survival Mode. He may never learn how to step down from that platform.

I think Obama invented the Internet as well. Michelle helped. DOOM (Daughters Of Obama & Michelle) were not involved and will not be referenced here directly. That would be bad form, of course.

Unless you were to include them in the dialog on something say, like gun control. And then it is valid. ;) Because we really should rely on children to decide these things for us adults. *sarcasm*