Note the wording of "pollution"

Note the state official response in italics.  The additional words "at all" are not necessary, but are given for emphasis, making the denial "sensitive" in analysis. 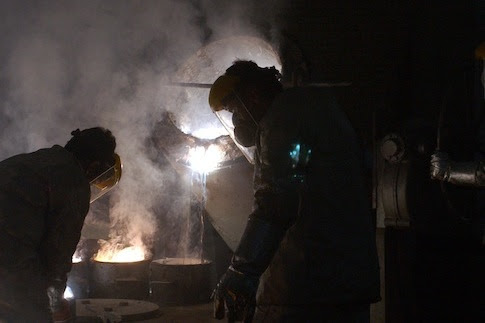 Iranian officials have instructed residents of Isfahan to leave the city, renewing concerns that a nearby nuclear site could be leaking radioactive material.
An edict issued Wednesday by Iranian authorities orders Isfahan’s one-and-a-half million people to leave the city “because pollution has now reached emergency levels,” the BBC reported.
However, outside observers suspect that the evacuation order may corroborate previous reports indicating that a uranium enrichment facility near Isfahan had been leaking radioactive material.
Tehran went to great lengths in December to deny these reports, tellingstate-run media outlets that “the rumors about leaking and contamination at Isfahan’s [Uranium Conversion Facility] are not true at all.”
November reports indicated that a radioactive leak might have poisoned several workers at the nuclear plant, which converts highly toxic yellowcake uranium into material that could be used in the core of a nuclear weapon.
The head of Iran’s emergency services agency said at the time that residents have no reason to worry about possible contamination resulting from a possible leak.
Stories about the potential leak soon disappeared from state-run news websites, Trend reported in late November.
Iranian officials denied that a leak has occurred and blamed Western media outlets for creating “tumult” in the region.
Wednesday’s evacuation order is now fueling concerns that Iranian officials are trying to hide something, including further fallout from a possible radioactive leak.
“Pollution in Isfahan is a problem but in the past, Iranian authorities respond by closing schools and the government to keep people at home and let the pollution dissipate, not by evacuating people,” said Michael Rubin, a former Pentagon adviser on Iran and Iraq who has written about Isfahan’s battle against pollution.
“Mass evacuations suggest a far more serious problem,” Rubin explained. “There are two possibilities here: There is a radiation leak and the regime is lying or there is really bad pollution and no one believes the regime’s explanations.”
Rubin also pointed out that Iranian officials have a history of lying to both Western officials and their own citizens.
It remains unclear whether the technology has been properly inspected for safety because Iran has denied Western officials access to many of its nuclear sites.
The nuclear site at Isfahan has been targeted for attack in the past.
An unexplained explosion at the plant in 2011 is reported to have damaged the facility.
The nuclear plant also sits on an active fault line. The city of Isfahan has been destroyed at least six times from past earthquakes, a point of concern among regional experts.
“Given that Iran is on an earthquake zone and has lost tens of thousands of people with regularity suggests that a devastating nuclear accident is only a matter of time,” said Rubin.
Peter Hyatt as Statement Analysis Blog at 6:33 AM

The head of Iran’s emergency services agency said at the time that residents have no reason to worry about POSSIBLE contamination resulting from a POSSIBLE leak.

Wednesday’s evacuation order is now fueling concerns that Iranian officials are trying to hide something, including further fallout from a POSSIBLE radioactive leak.

Possible is used 3 times, is this highly sinsitive ?

I read about this last night and it's very concerning.
Although I've heard THIRD hand that it isn't true.(I know - not very reliable.) My hope is that this person is correct.

Although I wouldn't doubt if there is a major nuclear event. I find it quite scary for the people of this region and all of us in this world.

God bless the people of Isfahan & the surrounding areas.

Do you look for PUSH PULL words in in your analysis and is this similar to using extra words and or qualifiers?

The following excerpt from a legal deposition, illustrates how an attorney identified and exploited the Push-Pull Word "straight."

The Push-Pull Word "straight" pushes off "not straight" or "crooked." If the driver truly intended to go straight home he would have likely said, "Yes, I dropped him off and went home." The lawyer instinctively recognized the Push-Pull Word "straight" and followed up with the presumptive question, "Where did you stop on your way home?," which forced the driver to reveal his true intension.

Push-Pull Words and other verbal deception detection techniques are presented in a booklet titled Catch a Liar. These verbal deception detection techniques were adopted for parental use in Fibs to Facts. Fibs to Facts is a booklet that provides parents with practical tools to determine if their children are lying or are reluctant to discuss sensitive topics.

And you would be John Shaefer, author of this booklet, I presume? Peddling your wares?

Assuming the original statement was in Farsi and translated into English, would it still be fair to say the phrase "at all" is a genuine pleonasm that weakens the denial, instead of just an artifact of translation?

One man's 'nuclear pollution' is another man's 'radioactive leak'. (The BBC is so polite, even about radioactivity.)

Think trash vs. Chernobyl and you've about got it.