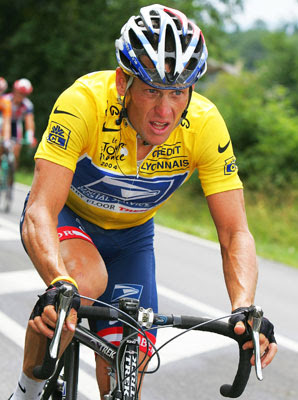 Statement Analysis has already shown that he was deceptive about a number of topics, including his claim to have not used during his comeback tours; tours in which drug tests have shown he was using.

Here is the article, with quotes followed by Statement Analysis in bold type.  You will notice that he never actually said, "I did not dope in 2009", for example.  He does not "lie" technically, but avoids issuing a reliable denial.

A reliable denial has 3 components.  If one is missing, or a fourth added, it is "unreliable."  Deceptive people avoid the simple "I didn't do it" of a Reliable Denial.  They will substitute the more vague, all encompassing word, "never", or drop the pronoun, "I", or change the allegation.

Lance Armstrong may have lied to Oprah Winfrey during his so-called confession Thursday night about his doping during the Tour de France bicycle race, investigators told ABC News today.
Armstrong, 41, admitted for the first time that his decade-long dominance of cycling and seven wins in the Tour de France were owed, in part, to performance-enhancing drugs and oxygen-boosting blood transfusions. He told Winfrey that he was taking the opportunity to confess to everything he had done wrong, including angrily denying reports for years claiming that he had doped.
Investigators familiar with Armstrong's case, however, said today that Armstrong didn't completely come clean. They say he blatantly lied about when he stopped doping, saying the last time he used the drugs and transfusions was the 2005 race.
"That's the only thing in this whole report that upset me," Armstrong said during the interview. "The accusation and alleged proof that they said I doped  is not true. The last time I crossed the line, that line was 2005."
Yes or No questions are the easiest to lie to, which is why we view every single word after "no" as important.  Here he only tells us what upset him.  Nothing else in the report upset him?  This, itself, is not true, as he said that being compared to the biggest scandal in all of sport bothered him, highlighting the East German athlete scandal.  He said "the accusation and alleged proof that they said I doped is not true"; he did not say that he did not dope, but that the accusation and alleged proof is not true.  Had Oprah been trained in analysis, she would have asked if other proof would have been true, for example.  He avoided simply saying, "I did not dope in the 2009 Tour", plainly.  This is what innocent people do.  It is something Armstrong has avoided for more than 10 years, as he tore into others and sought to destroy lives and intimidate team mates wives.  "The last time I crossed the line..." is not to deny anything.  What line? What does it mean to cross it?
My guess is that Lance Armstrong continued doping when he ran the recent marathon and cycling races.
"You did not do a blood transfusion in 2009?" Winfrey asked.
This is a poorly worded question and only speaks to blood transfusion.  It is a yes or no question.
"No, 2009 and 2010 absolutely not," Armstrong said.
The answer "no" is immediately weakened with five additional words, which tell us nothing regarding the denial, but with analysis, lots.
He did not issue a reliable denial about doping in 2009 and 2010.
Due to the his history of Unreliable Denials, it is safe to go beyond the simple conclusion of "Unreliable Denial", but to say that this is his pattern of deception and it continued in the Oprah interviews.
Investigators familiar with the case disagree. They said today that Armstrong's blood values at the 2009 race showed clear blood manipulation consistent with two transfusions. Armstrong's red blood cell count suddenly went up at these points, even though the number of baby red blood cells did not.
Investigators said this was proof that he received a transfusion of mature red blood cells.
If Armstrong lied about the 2009 race, it could be to protect himself criminally, investigators said.
He was deceptive about other issues too, including his ex wife, his son, the damage done to others, and so forth.
He may have thought he would reclaim his reputation, but he actually has made himself much worse.  What is so "scary", to use his own word, is how he can appear to have no empathy with anyone in life damaged by him.
His "confession" is with deception and can only infuriate those ruined by him.
He owes many, including those who donated to his cancer fund, far more than an apology.

Peter Hyatt as Statement Analysis Blog at 11:55 AM

I picked up on a bunch of absolutely nots and nevers around them talking about 2005 which made it sensitive.
He couldn't make a reliable denial so we can't do it for him.

I wonder why 2005 is so sensitive to him especially given evidence he was still doping then and in 2009 and 2010 which would indicate he continued to lie and cheat.
Was he banking on people buying he was clean after that date and anything he did therefore was clean and shouldn't be removed.
Are there finacial penalties as well as possible criminal charges in relation to his doping after 2005? perjury charges which have not reached the statute of limitations?
Why is 2005 so important to him that he will happily admit to doping before then and not after.

What i saw of the programmes and noted was not so much what he said along with all the minimising and blaming of others also what he didn't say.
I found myself muttering at the tv telling oprah to shut up and let him finish answering a question, stop with the compound questions and giving him a choice of answers which she freely provided as well as finishing his answers for him.

This was a mutual ego boosting show out to make them both look good, a has been cheating cyclist and a has been medicocre interviewer. No wonder the mccanns picked her.

As the lawyers, organisations, media and public are saying he needs to be hauled before a court and made to testify under oath, he will still try and decieve as he has nothing to lose and will probably name names and blame everyone and their dog on the grounds if he is going down he isn't going to go down alone.

I would advise everyone connected with him, ever rode with him in his team or a race start talking to their lawyers cos their necks are on the block and he will have no compunction about taking everyone with him

He's a bum! Lets stop giving him any more of our time.

A rider, wrapped in misogyny, inside an ego.

Has anyone seen some of the body language analysis done on this interview? One of the articles I read said that when he discusses the fact that he doped and how he was able to get away with it, he smirks and curls up his lip to the side indicating he was proud of himself for that. The body language analysis was interesting. I just googled "lance Armstrong body language" and a whole bunch of articles came up to read.

Lemon said...
A rider, wrapped in misogyny, inside an ego.

You made him sound like a scotch egg (hard boiled egg wrapped in sausagemeat, breadcrumbed and then deep fried or oven baked)

Does he come in a variety of flavors? if so what are they since i love the ones made with lincolnshire sausagemeat.

I wonder how much money Lance received for lying to Oprah on her show?

Lance Armstrong got engaged to Sheryl Crow in 2005 and they split in 2006.

Supposedly she was interviewed by the feds in 2011.

Shame on him. Lying fool. Plus he was obnoxious enough to accuse others and sue them. Shame on Oprah for giving the liar a showcase. He deserves to be permanently banned from the sport, no exceptions. He's no sportsman.

He even managed to get a backhanded dig in at Oprah when he repeated the "clever" comment he made to Betsy Andrieu about not calling her fat. Oprah's expression showed it was not missed by her either.

And on Betsy Andrieu, if his desire was to make things right with her how difficult would it have been to simply say NO when asked if Betsy had lied? Instead he chose to repeat the insulting name he called her and then "not go there" in this no-holds barred interview. I suspect Betsy warned him against saying anything else about her and his way to handle that was to legitimately repeat his insults.

He is a spiteful, nasty piece of work.

Deception Is Futile When Big Brother’s Lie Detector Turns Its Eyes on You
http://www.wired.com/threatlevel/2013/01/ff-lie-detector/all/

I'd be interested in your opinion on this technology Peter.

Please help find Ayla
~ABC said...
Off Topic
Avatar
I think American soldiers should come home and do this job. Their PTSD heightened sense of awareness combined with SA training would make them more accurate then a machine at dicerning truth.

Please help find Ayla
If they could invent a machine that could recognize the bad guys, and have the additional ability to chase them down it would be like a futuristic movie.

It's troubling how much our culture tries to rely on machines to do what face-to-face human interaction would do so much better!

I didn't see te interview but believe your synopsis. I would assume he would be be trying to save himself as much as possible- which would involve lying. The whole situation is just dumb to me- he lied- he used the relativlley mild 02 enhancer and steriods- I believe he didn't think it was that big of deal- everyone was doing it- and I believe he thought he was still the best athlete- regardless. I hope he can evolve thru this sad state of affairs. I can not judge him- I don't know about it all- maybe if I did, I could- but, I like not being able to- becoz I think he worked hard and did good things with his celebrity and I just don't want to see him beaten into the ground. However- I not think he should be allowed to compete and him even asking is evidence of his character flaw. But, most are flawed and his flaws are way better than the youth minister or boy scout leader who's a molester- his sins are basic and forgivable.

"His sins are basic and forgivable"

Did Lance ask for forgiveness of his sins?

I thought that he first "denied", then "justified" by "blaming" others.

What did I miss?

Hobnob is legend.so is lemon.

Okay, I just had to LOL about the sentence:

"Had Oprah been trained in analysis..."

I guess he wouldn't have chosen to go to her then.