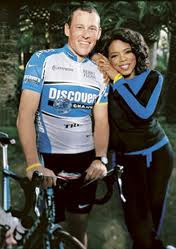 How low can one liar go?

After humiliating anyone who dared tell the truth, Lance Armstrong, in a shameless self serving manner, will seek 'forgiveness' from Oprah Winfrey and admit his doping.

Will this be an ultimate 'jumping of the shark' for Armstrong?

How will this impact the lining up of the law suits against him, including seeking to regain monies paid for his Tour victories?

Perhaps a reality show starring Lance and Casey Anthony together on the new Al Gore Al Jezera Terrorist Network might satisfy the ratings seekers longing for a shot at selling hot commercial spots.

January 17th, 9PM to 10:30PM on Orprah's network.  On this same night, Prosecuting Casey Anthony will be on Lifetime.

Where is Honey Boo Boo when we need educatin'?
Peter Hyatt as Statement Analysis Blog at 8:18 PM

Last I saw Honey, she was swingin' on a New Year's chandelier...

Has it been determined if he will or will not be paid by Oprah for this "interview", or if it is being used to help him in future law proceedings?

I can't help but think of Matthew 5:7. "Blessed are the merciful, for they will be shown mercy." He showed no mercy to others, so now he comes expecting mercy?

Two significant differences between Anthony and Armstrong - Public Relations budgets and network of "friends". They care only for themselves, everyone else is a tool for their desires.

He is in a quandry since if he publicly admits to doping he will then get hammered in the civil suits where he is being sued for return of winnings etc and also the return of libel award, costs and interest from the Sunday Times.

Public admission leaves him no escape from anyone he sued and won against, sponsorship deals etc and also anyone he threatened,blackmailed, defamed etc.

I have to ask what does he get out of a public adission since it isn't money.
Anything he gets paid from oprah ( a sad has-been)is going to be a mere drop in the ocean to his costs.
I would suspect his lawyes have advised to stay silent, admit nothing as they would see the looming fiscal cliff and no parachute.

I lean toward thinking lance will do what lance wants, when he wants and how he wants.
No one is going to tell him what to do, he is the boss, he is god in his own mind and he beoieves that if he admits the truth all who are suing him will backdown or minimise their claims because he can't be all bad he just made a mistake.
He believes sponsors will flock to him because of who he is and his tour de france success (even though he cheated)

He truly sees himself as untouchable, he succeeds wildly at everything he does so why should this be any different?
I would also go so far as to think that he would not be averse to a touch of blackmail or bribery along the lines of drop the case and i will see you right.
After all it worked before, heck even USADA said he offered them a huge donation (which they rightly refused)
Everyone and anything can be bought at the right price, he fails to understand he is spoiled goods, he has no income and a ton of outgoings, there is nothing he can say or do that will nullify the crimes he committed, the harm he has done to the sport, to the charity and to his family and few remaining friends.

His best bet is to shut up and crawl under a rock, let time ease the harm he has caused.

He is not going to admit to it. He is going to say it was widespread, everyone did it and that he used substances that were not specifically banned.

Anonymous said...
He is not going to admit to it. He is going to say it was widespread, everyone did it and that he used substances that were not specifically banned.

Ding Ding Ding you win the prize, a gold star. Wear it with pride.
it will boil down to pedantics.
I didn't legally dope since the drugs i used were not specifically banned.
If they aren't banned then technically i can use them and did along with many others.

What he won't say is, if the USADA knew about them they would have been banned and would be tested for, he would not have taken them once he knew they were banned (he would have them gone onto other methods of doping that the testers didn't know existed or could test for)
Remember USADA and other organsisations in sports are, and will always be, playing catch up.
They can only develop tests for new drugs and doping methods once they know the drug/method exists.
you cannot test for something if you don't know what to look for.

You can bet if he does this interview he will have vetted and stipulated the questions being ask and will be weasily with his words.
he will have don it becaus everyone else did it and his dr,management, team mates, sponsors etc all knew and encouraged it.
he will have been pressured into it and possibly even threatened if he didn't comply (yeah really and the moon is made of playdoh)

There are liars who will stick to their lie until death and then there are liars with a 2 part strategy- the second part is, when all else fails, "confess", act contrite and say you're sorry.

Please help find Ayla
They look like a nice couple in the photo.

I agree. He will not provide the truth. Just deceit, tried and tested and it's what always worked before. I like the "information age" though. You can know so many things.

I especially like that I can recognize in a millah-second [sic-intentional-it's my Maine accent. Weird, I know, I type my accent; I hope you can respect our differences] that "it" is nothing more than a profitable media-bedding bull$hit; rather, in O's case: cowteet-cover-up by her and her corporate sucklings; that puts big ole wicked sparkle-y diamond dollar signs in O's eyes! And a lot of people live off her scraps.

Some people have no shame in sacrificing some for some other(s). I'll boycott her sponsors. And, I recognize in a millah second that it will have little to no significant impact. (I've been boycotting a lot of $hitheads, for a lottah [sic-intentional]years.

OT: I've drawn a comparison to ponder. "Duping Delight" in Tot Murderer Anthony and Ayla conspirator, Courtney Roberts. Anyone else pick up traces of similarities with the two people? Roberts is plastering pics of herself always happy and smiling, and, Zumba-ing...also, it's been reported she laughed, snickered, chuckled or the like, at the Reynolds during an encounter in a court parking lot.

I hope I'm not just thinking the worst. I suppose it depends whether Courtney is still tight with the fam over on Violence Ave? Or, is she keeping her distance?