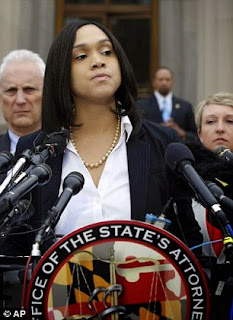 Most simply put, a word (particularly, a noun) that keeps resounding in someone's mind and comes out in the speech is just that:

on the person's mind.

The reason why it is on someone's mind is not necessarily known, but because it is playing, like a repeat recording, over and over in the brain working its way to the tongue, it is said to be "sensitive" to the person.

This may be varying reasons for the sensitivity but:

a.  It is sensitive
b.  It is important

Often, but not always, the sensitivity can linger because the person knows what I am saying isn't really true.  That is, that is partially true, but not fully, or that it is true, but misleading, or that it is something the person does not want to be asked about yet keeps repeating.

In the Baltimore District Attorney Marilyn Mosby's statement, we saw two such words (nouns) that were stood out to us, just as "me" and "I" did in her speech.

The two words were:

"Independent" and "Thorough." (even more than "comprehensive" though the redundancy should not be missed)

These two words were repeated enough for even the untrained ear to pick up on them and so it was that, over time, criticism began to fall upon Mosby for:

a.  Making it a personal "front and center" attention grab

b.  Being part of a larger picture that proved to be anything but "independent"including the FBI being forced to admit they had private planes monitoring the demonstrations, issuing a statement denying that they were there to film citizens practicing free speech.  This, along with other connections to the White House, and an investigator once tazed by Baltimore police have helped us understand why she kept saying "independent" so often.

Rushing to capitalize on the media frenzy and fairness are not close relatives, but rushing and thoroughness do not fit together.

The rush to the charges is likely to be her undoing.  Legal experts have weighed in, along with common media, questioning why evidence was not examined for a few weeks, in the least, yet in her own statement, we saw her reasoning:  she was not seeking justice, but to please the crowd.  (See the analysis for details) "I have heard your cry 'no justice, no peace;" is not a statement of prosecution.

Media pointed out that she gave the wrong addresses, even, such a minor detail, yet, anything but thorough in its workings.

Already, it appears that the murder charge may end up being dropped, and the wrongful arrest will now come down to the spring that a switchblade uses to open.

"No justice, no peace, no racist police" was the chant to follow in the demonstrations after her speech.

3 of the officers are black.

According to the Baltimore Sun today:  Since April 28th, 2015, the day after the Baltimore riot, 40 people have been shot in Baltimore.  10 people were shot Thursday of this week, alone.

Any word that is repeated is sensitive to the subject.  We look first at context to learn why it is sensitive, and later, as an investigation continues, to evidence to help answer our question.
Peter Hyatt as Statement Analysis Blog at 5:37 PM

This is a partial interrogation of Tom Fallis. What do you guys make of it?

In the early morning hours of New Years Day 2012, officers from the Evans Police Department responded quickly to the call from the Fallis home. It's a small department, with 36 officers.

"I don't think we've had an armed -- maybe one or two armed robberies here since I've been her in almost eight years," said Chief Brandt.

Even though Tom Fallis had called in the shooting as a suicide, police brought him in for questioning early that morning, while his parents watched the children. Investigators were suspicious right away, because neighbors said they heard yelling. Fallis was questioned by Detective Rita Wolf:

Det. Wolf: Then she's telling you to get off of her.

Tom Fallis: I wasn't on her.

Det. Wolf: Why do you think someone said that? They could hear her vividly saying, "get off me, get off me."

Tom Fallis: I wasn't on her.

Det. Wolf: So somebody's just making that up, Tom?

Tom Fallis: My wife never told me to get off of her.

Det. Wolf: When you went upstairs and you were arguing with her. The wound on the back of her head isn't where she could do it herself, Tom. It's not.

Investigators also searched his body and noticed scratches on his chest. Fallis says he scratched himself:

Tom Fallis to police: Because I just shaved my chest. I just shaved it, because I've never done it before ... I'm sitting there going like this with my shirt. Because it itches, it scratches.

Fallis gets increasingly agitated as Wolf continues her questioning:

Tom Fallis: You're accusing me of killing my wife. I'm not supposed to get upset? That doesn't make sense...

Det. Wolf: You were upset before this.

Tom Fallis: Yeah, 'cause I've been here the whole time.

Det. Wolf: You are known to blow off the handle, is what they're saying.

The full transcript of the show is below.

John - I am watching the show right now and was looking for transcripts.

Now since he's accused of "shooting his wife" this to me seemed like a reliable denial?

I am only half the way thru the show but it really struck me as reliable.

I'm wondering if there was a struggle and both their hands were on the gun when it "went off", and this is the reason why he says " I didn't shoot Ashley. I did not shoot my wife. I didn't shoot the mother of my kids" That in his mind, it was her who pulled the trigger in the struggle if there was one.

This to me too also sounds like a reliable denial (RD)