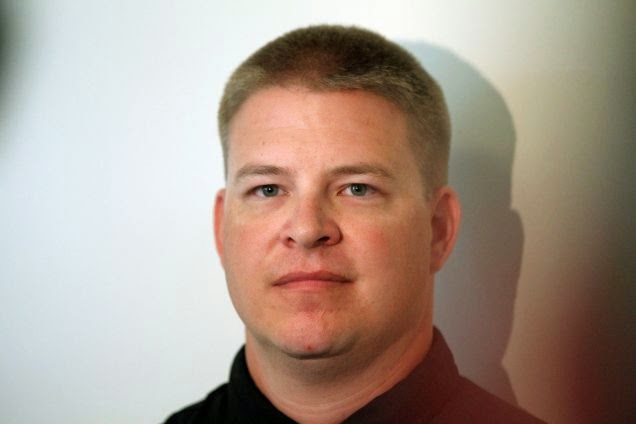 What does it mean when one asks a question in an open statement where no answer is sought?

If this takes place during an interview, it is very important to not answer the question, as the subject may be speaking to himself, especially if re-living the event.  By pausing, you allow time to see if the subject is directing the question to you, or to himself.

In a written statement, we may wonder the same thing:  is the subject asking the question of the audience, or, is he using a rhetorical question to make a point.

The following is a written statement made by Ian Adams.

Mr. Adams is a police officer and is a spokesman for the Utah Fraternal Order of Police.  He asks a question at the end of the statement.

"Police are trained and expected to react to deadly threats. As many deadly threats emerge is the exact amount of times police will respond.  The onus is on the person being arrested to stop trying to assault and kill police officers and the innocent public. … Why do some in society continue to insist the problem lies with police officers?"

Note the question that the written statement poses is rhetorical.

He stated that the "onus" is upon the person who is being arrested.  This person must "stop trying to assault and kill police officers", with "officers" being plural.  This comes before the question, in the written statement.

When someone asks a question in an open statement, it is a very important statement, and may indicate the subject is not seeking information from an intended audience but may be wrestling within himself, for an answer.

In analytical interviewing, we do not answer the question, but let the pause tell us if the subject is asking us a question, or:

if he is asking himself a question.

IF the subject is speaking to himself, it is a very strong indicator that the subject is reliving the event:  experiential memory is in play.  It is reliable.

The following is a video of Ian Adams which should be viewed in light of his question posed.

Please note the video is graphic.


In Video:  Note what Ian Adams said to the victim in the hospital about being a "man."

As an aside:  Dog training commands: "Platz" is "place" to lay down by the handler. (German) Heir is "here" or "come" "Fass" is "Attack" command. The dog is reported to have been German Shepherd, but appears to be a Belgian Malinois. Most K-9 units have trained the dogs to apprehend and hold a suspect by the arm or leg. The only time K-9's are trained to bite anywhere else is a fleeing suspect or the body part that the suspect uses to attack with.

Note the delay in standing up by the suspect.

Ugh, this is horrifying to watch. I can barely pay attention to what is being said, because my stomach is knotted up from seeing his face being ripped half off.

I watched it twice and still don't understand what is happening. Are the police there to arrest him for 'arson' because he is burning things in a barrel on his property? Did he burn someone else's property? I can't see anything in his demeanor, or actions, that warrants the dog being released on him. He didn't immediately follow commands, but his hands were up, he was sitting, and not taking aggressive actions.

Idk, Jen ow,
He was told to stand. By not following the officers order, he was being aggressive. If everything was cool, why didn't he just stand? I know I would've!

Oh, I agree, I would have stood too.

(Then again, I'm scared of big dogs, so I might freeze, but hopefully I would stand right up!)

However, I would expect the dog to only be deployed in a desperate situation, to reduce the risk to the officers, and protect them from immediate danger. What was done by this officer seems to be more of a bully move, and an extreme use of force for the situation.

The officer is talking to him pretty calmly, ("stand up or I'm sending in the dog", "come out to us, or I'm sending in the dog". The officer is requesting/allowing the guy to move of his free will, and the guy is answering him. His hands are up. The officer doesn't even try to engage him and cuff him, instead he sends in the dog. It surprises me that he would command the dog to attack, (and let him keep attacking) when the guy wasn't fighting, running, etc. The guy doesn't even try to fight, or hurt the dog when the dog is tearing at his face!

(*Also, the guy is sitting there so calmly that the dog can't even find him at first! )

I know refusing to follow orders is 'resisting arrest', but IMO he wasn't behaving in an 'aggressive' way to warrant the dog being involved. From what the officer says dismissively about what/where he was burning, it appears that he may not have committed arson at all. If that is the case, this man was attacked and disfigured for no reason. I don't know why he didn't go to the door and answer, but I didn't hear this officers announce that they had a warrant.

It's unclear what happened before the canine officer arrived, but it seems like he unnecessarily escalated the situation. He got out of his cruiser pumped up, and took over the situation although other officers were already on the scene.

I don't have the stomach to watch the video.

There could be a physical reason he didn't stand.

I don't blame you for not watching the video, it upset me so badly, and I couldn't stop thinking about it.

I've described most of what took place in the video, but a few more things:

The officers also allow a wooden chair which they leaned against the wall to fall onto the man's face while he is restrained on the floor, which smacks him hard in the forehead.

While he is restrained on the floor, the officers use a cell phone to take pictures of his facial injuries, turning his face to get different angles.

(I assume they take official pictures of injuries with something other than a cell phone?)

The officer jokes about how he had to 'turn away', and gags a few times after the victim has to spit out blood in the hospital, where he jokes with the other officers that they "found his weakness".

The officer also mocks the victim as he lays in the hospital bed saying, * 'that's no way to be a man', and 'we can be friends, but it has to be after all the police stuff is over'.

(*paraphrased, I'm on my phone, and can't play the video all the way through)

It's an upsetting video, both from the attack/injury, and the flippant nature of the officers reaction, and comments about the man's injuries.