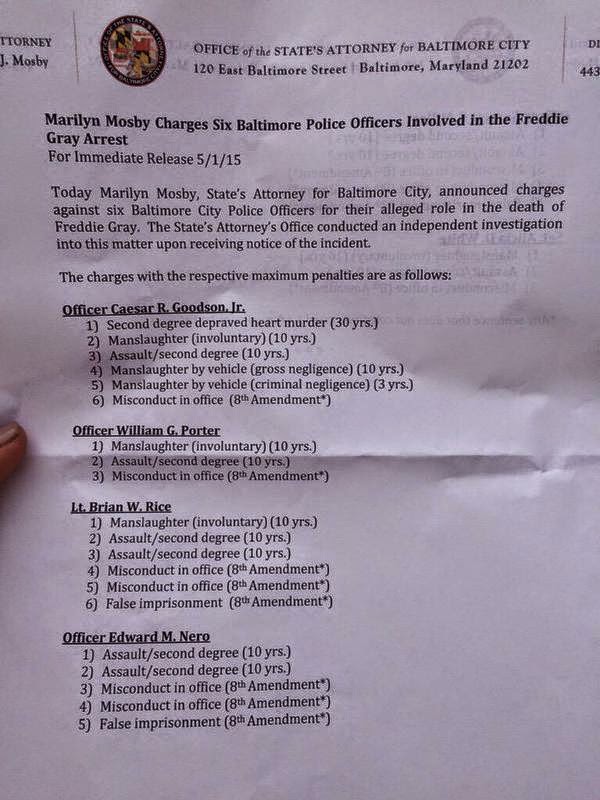 I have written about deceptive and racist police officers before and will continue to.  As this case unfolds, I will write analysis of the statements issued.

In Ferguson, the same Statement Analysis principles were applied to Darren Wilson's statements that were, and are applied in all other cases.

His status in law enforcement, gender, race, nor anything else, was analyzed.  The analysis concluded:  veracity indicated because his words proceeded from experiential memory.

This, in spite of political pressure to the contrary.

The lie, "hands up!" continues to be used for political purposes.  This is deception in action.

Statements will come out; testimonies given, in the case of Freddy Gray.

We, collectively, will know the truth as the principles of Statement Analysis will be applied, publicly, and for scrutiny, to each statement we are permitted to see.

It is my hope, personally, that justice will be done.

If these six officers deliberately caused the death of Freddy Gray, they need to meet justice.

If they did not deliberately cause the death of Freddy Gray, all political pressure, which is what a riot is, must not be accounted for in the deliberation.

If negligence of duty, or the failure to follow protocol is discovered, it must be dealt with fairly.

A woman whose fiance has been missing since a kayaking trip on the Hudson River 11 days ago has been charged with his murder.

Angelika Graswald, 35, has been arrested on a second-degree murder charge in connection with the death of Vincent Viafore, 46.

She told investigators that she and Mr Viafore were kayaking on 19 April when his boat capsized in choppy, cold waters.

Graswald called 911 and said she could not find her fiance in the water.

She reported falling out of her kayak as she tried to help him, and said she was picked up by a boater. She was treated for hypothermia.

Graswald also gave a TV interview in which she tearfully said she watched Mr Viafore fall in the water.

"He said, 'I don't think I'm gonna make it,' and I said, 'What are you talking about? Of course you are,'" she told News 12, a Westchester TV station.

They have found both kayaks but so far have not been able to recover the body. However, police believe he is dead.

Officials said Graswald was wearing a life jacket but they believe Mr Viafore was not.

Investigators cited inconsistencies in her account as they announced the murder charge on Thursday afternoon. However, they did not elaborate on how she allegedly killed him or why.

The search for Mr Viafore continues, by boat and helicopter, and police have asked boaters, fishermen and hikers to be on the lookout.

It is unclear whether Graswald has entered a plea. She is due to appear in court on 5 May.

I am looking forward to reading your analysis on this topic.