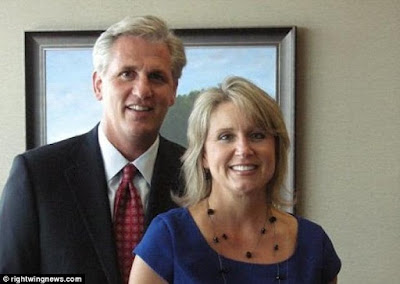 North Carolina CongresswomanRenee Elmers was rumored to have had an affair with  Kevin McCarthy. Simple enough, we expect her to say, "I didn't have an affair with Kevin McCarthy", especially since the word "affair" was used in the accusation, and the word "affair", although subjective, has a wide inclusion of elements regarding sexuality and romance.

This is reported to have come from a Wikipedia biography entry where the "editor" had an ip address from the Dept. of Homeland Security, of the federal government.

This is the only statement I could find, and if it is preceded by a reliable denial, disregard.

"As someone who has been targeted by completely false accusations and innuendo, I have been moved by the outpouring of support and prayers from my colleagues, constituents and friends. Now I will be praying for those who find it acceptable to bear false witness."

What do you expect to hear from someone who is innocent?

"I didn't have an affair with Kevin McCarthy" would be a very strong, reliable denial using:

This statement also, by itself, would have nothing added to it, therefore, it would be considered reliable.

Let's look at what we do have, with the caveat that if she issued a reliable denial, this analysis should be discarded.

"As someone who has been targeted"

Is to use passive voice.  She does not say "I have been targeted"; therefore, this should be considered distancing language.

by completely false accusations and innuendo,

This does not say "I didn't have an affair..." but makes two elements of inclusion:

a.  false accusations
b.  innuendo

This is to 'pluralize' that which is singular ("affair") and may be that the allegation against her has specific details. We now need to know the difference between "accusations" (plural) and "innuendo."

This is a weak assertion. It is likely that she knows of some specifics that are actually false. This may be minor detail associated with the affair.

Next, note that the false accusations are in need of strengthening with "completely", which is to affirm the plurality.  This may be a psychological watering down of what took place.

Here is a good place to tell us she did not have an affair with him, instead:

I have been moved by the outpouring of support and prayers from my colleagues, constituents and friends.

This is a tangent that seeks to strengthen itself via support.  This tells us that not only do we have a denial absent a denial, but we have a need to water down and spread out the accusation, and to strengthen the realm of support around her.  For those who "did not do it", we generally do not see a need to garner support.  This is another weakness within the statement.


Now I will be praying for those who find it acceptable to bear false witness."

This is a noble gesture, one very difficult for anyone to accomplish, but one in which, in analysis, tells us of the need to take the moral high ground.
Often, those who show a need for moral high ground do so because they are on the moral "low ground."

Renee Elmers has a need to water down the accusation, to firm up her support, and to take the moral high ground, all instead of simply saying, "I didn't have an affair with Kevin McCarthy."

Our rule is simple:

If the subject is unwilling or unable to say she didn't do it, we are not permitted to say it for her.

If this statement was made in correlation with a reliable denial, the analysis is void, though the need to politicize itself, is a weakness.

If Elmers wished to communicate that she did not have an affair, she has likely left most people with the impression that she did.


Peter Hyatt as Statement Analysis Blog at 8:54 AM

Excellent analysis as usual,Peter! Because of the principles you teach here, when this story broke, the first thing I did was to read for that first person, event-specific denial. LOL

"Now I will be praying for those who find it acceptable to bear false witness."

Accusing someone of an affair, or even implying it, is very personal and in the case of innocence...highly offensive. Her statement should read "Now I will be praying for those who find it acceptable to bear false witness against me." What is noticeably absent is a sense of outrage- she stands to lose a lot from a false accusation morally, personally, and professionally. Also absent is any mention of legal action , given that the perpetrator is known. I would expect to hear her invoking language involving a libel lawsuit, especially given that information was disseminated via e-mail to various political stakeholders (if you will). Praying for those who find it acceptable to bear false witness is very soft, very passive language, particularly in the political arena. An innocent spiritually mature Christian (one who has long been a Christian and regularly studies and chooses to apply Biblical principles in situations) might say this after they have worked through the initial knee-jerk emotions and anger. But, only after issuing an indignant first-person, event-specific denial. ;)

"Now I will be praying for those who find it acceptable to bear false witness."

I agree with ffof.

For all we know, she may be praying for herself and her alleged paramour!