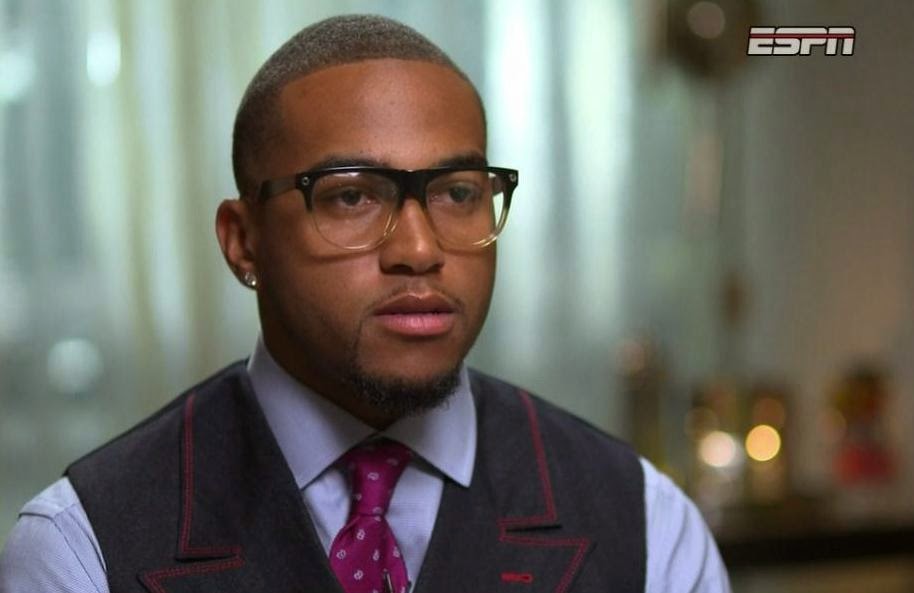 An article in NJ.com reported that DeShawn Jackson had associations with gang members.  He was then interviewed by Stephen Smith to "clear the air."

Given the nature of gangs, is "past affiliation" possible?

First is the denial with analysis, followed by the reply of NJ.com where the article originated.

“No, it’s not true. Honestly, where I was raised and where I grew up at, that’s the product of an environment. … The things I witnessed, the things I saw on a daily basis, kind of surrounded me around that. Do I know friends that are out there involved? Yes. I try to, you know, stay away from them. I don’t try to intervene and do things of any nature that has anything to do with negative activities, but I’m definitely aware and know certain gang members. But as far as me being affiliated, or me being a gang member, never not have once been. Never had any affiliation of going out and doing things that is against the law. I always felt that I’m a product of my environment, but at the same time, I’m the guy that wants to go out there and do things the right way.”

2.  "Honestly" which is a word signaling that there are times when he is not honest, and here, he uses it for emphasis.  We note when this word arises, and when it does not.

3.  He was "surrounded" which means, on all sides.  This appears to be a way of justifying his affiliation.  He does not make us wait long to understand what it meant to be "surrounded" by gang affiliation:

Note that there were things he "witnessed" but also things he "saw"; which is different.  To "witness" things is to not participate.  he "saw" other things.  It would have been interesting if the Interviewer had asked him about the difference.  The change of language should represent a change in reality.

4. "Friends" and not "people" or "guys"; which brings familiar association.  He does not simple know those who are in a gang, but they are his "friends" and here, he does not disown, nor insult them, reducing them in any way, but instead affirms his present relationship with gang members as "friends."

5. He uses the word "try"  He makes an effort to "stay away" from them, in the present tense.   He does not say he is successful, so we cannot say it for him.  It is only an effort that he can bring himself to say.

6.  He doesn't "try" to intervene, reported in the negative, in gang issues.  This means he may interfere, only he does not try to.  This is similar to trying to stay away from friends.

7.  "but" often refutes, or minimizes that which preceded it; confirming involvement in some form.

8.  "Never" is not only unreliable, but it is with the dropped pronoun, "I" which is the most practiced (and efficient) word in the English language.

9.  Note that he cannot bring himself to even say he "never" had a gang affiliation but only of "going out and doing things" which is softening language.

10.  "felt" is to blame his gang affiliation on his environment, howbeit weakly and:

He does not give a reliable denial about gang affiliation, instead affirming his association.

There is much wrong with the Interviewer, who does not appear to have training in interviewing, and information is missed repeatedly.  He  used the 3rd person to address the subject.  The interview was in response to a NJ article and the Interviewer misrepresented the article.

A response from NJ.com:

LAPD Detective Eric Crosson said in the story: "You don't want to see anybody throwing up gang signs like he did in the Redskins game last year. Those were neighborhood Crip gang signs and he flashed them during a game. He may not be affiliated with the gang, but they don't [ordinarily] take kindly to those not in the gang throwing up those gang signs."
During the interview, Smith said, "You are not associated, or do not hang out, with any gang members."
Jackson, however, admitted during the interview that he associates with gang members, just not when they're doing "negative things." Jackson tried to make the distinction of hanging out with gang members as individuals while not being affiliated with their gangs.
"Do I know friends that are out there involved (in gang activities)? Yes," Jackson told ESPN on Friday. "I try to stay away from them. ... I'm definitely aware and know certain gang members, but as far as me being affiliated and me being a gang member, never not have once been. Never have had any affiliation with going out and doing things that are against the law."
Later, when addressing the gang signs, he said, "... if you see signs or if you see me in pictures with affiliated gang members or whatever the case may be, that sign I am throwing up is to connect me with me and my boys," he said.
Smith implied the story about Jackson's alleged gang ties was leaked by the Eagles to NJ.com.
The conspiracy theories surrounding the story are comical. NJ.com uncovered Jackson's ties to alleged gang members through its own reporting. The Eagles played no part in NJ.com's investigation. When asked about Jackson's alleged gang ties, team officials said they were unaware of the ties and would not comment.

The NFLPA says it will look into whether the Eagles engaged in a smear campaign. When a union official contacted NJ.com sports director Kevin Manahan, the official was told the Eagles provided no information on Jackson's alleged gang ties.
During the ESPN interview, Jackson said he knew about the story a few days before its publication -- because NJ.com reached out to his representatives for comment and to speak with Jackson. But Jackson was not made available, and his publicist's sole comment was to deny Jackson was in a gang, an accusation the story never made.

DeSean Jackson said he has missed "one meeting" in his career

According to what's already been reported, that's likely not true. Jackson was suspended for missing a meeting in 2011, and skipped an exit interview with Kelly at the end of this past season. That's two.

CBS Sports reported Friday that Jackson hasn't been a model employee.
Jackson said he distanced himself from Theron Shakir, his friend and a rapper who performed for Jackson's music label, while Shakir was on trial for murder.
"Through the process, and the time where (Theron Shakir) was in jail, I kind of had to almost step back," Jackson said during the ESPN interview. "Because I'm a professional athlete. I know the ties of being around, or being seen, or making calls, or doing all that stuff that could easily make me be apart of it," Jackson said.

Jackson's instagram account, however, told a different story. Jackson posted a picture of Shakir during the trial, pleading for his release.
After the NJ.com story was published, Jackson deleted all photos of Shakir and him from his account, as well as other photos shown in the NJ.com reporting.
Peter Hyatt as Statement Analysis Blog at 9:35 AM

But as far as me being affiliated, or me being a gang member, NEVER NOT have once been.

Dropped pronoun between "have and once.

Anything in the negative we note as sensitive.

NEVER NOT have once been.

This can be taken out of the sentence and it will still get the message across.

A stronger sentence could be.

But as far as me being affiliated, or me being a gang member, not have "I" once been.

Yet he bolsters it with the qualifier never which then weakens it further. Plus the missing dropped pronoun. His statement is very weak.

The violent NFL gang wants the club members to disassociate with other violent gangs.

Funny that. The blurred line between games, music, and thugs. Oh my. An in a civilized society, no less.

OT - Ivan Lopez, Fort Hood shooter posted this on Facebook, though a military spokesman said he saw no combat situations:
Another post dealt with his time in Iraq: "Celebrating life. It has been exactly 1 year and 2 days since left Iraq seeing in Fallujah the most brutal explosion... I was left paralyzed and started a discussion over the radio... I was only focused on breathing deeply so that I don't lose focus and continue the mission. [Those] were hours of agony waiting for an attack by the insurgency but we were able to exit Fallujah all alive. I was in vehicle #6.The worst was that #5 was a diesel truck, the perfect target. And I was only thinking about getting back with my family."

What do you make of his post using statement analysis? I notice no pronoun usage in much of it.

Have you added to this article?, or am i going blind?, and forgetful again?. LoL :)

"Through the process, and the time where (Theron Shakir) was in jail, I KIND OF HAD TO ALMOST step back," Jackson said during the ESPN interview. "BECAUSE I'm a professional athlete. I know the ties of being around, or being seen, or making calls, or doing ALL THAT STUFF that could EASILY MAKE ME A PART OF IT," Jackson said.

I have a friend who grew up in a super gang populated area in LA she entered a gang when she was thirteen and by the time she was seventeen had nothing to do with it. she fully knew they were still going on -- but just had different desires and priorities. I think, from knowing her, I can understand how somebody could be somehow involved when they are young and then not involved when they are older. but still know people involved, etc. -- so in that way I think what he's infering is his status is a staus that people can have, and often do have. I haven't read up enough to judge if that's the status he has.

not all gangs are as "unleaveable" as TV and movies glorify them to be. there's shades of everything in the real world.

Re "witnessed" vs. "saw": My experience as a 20+ years practicing attorney, is that people generally use "witness" for things that they could testify to under oath with great specificity especially when they have a personal connection to the perpetrator/victim, and "saw" for things that they perceived at a greater distance and/or don't know the people involved. For example, I have had independent witnesses who say things like, "I saw (X) grab (Y's) purse and run down the BART tracks towards El Cerrito Plaza. At least, it looked to men like (X) but I couldn't swear to it -- I mean, I wouldn't testify as a witness against (X) or anything." Or, they will say things like, "I witnessed (such and such event that they saw up close and personal.)"

I don't see his self-justifying distinctions matter two hoots. To say that the gang signs are a way of connecting with his individual "boys", yet not OF the gang... it's disingenuous. A sign is a symbol, right? Anybody who grew up steeped in a gang neighborhood, has that symbol's significance fixed in their mind like they do the route they walk to school. A symbol for 100,000's of people doesn't lose its group significance, just because you claim you are directing it at "an individual". You finish a great downhill run at the Olympics, swish to the bottom, flash 2 big thumbs up at the camera, you don't say/pretend "oh, I meant that only for my sister, the rest of you millions of people, just pay my gesture no nevermind". The cop won with "he shouldn't glorify gang culture", end of story.