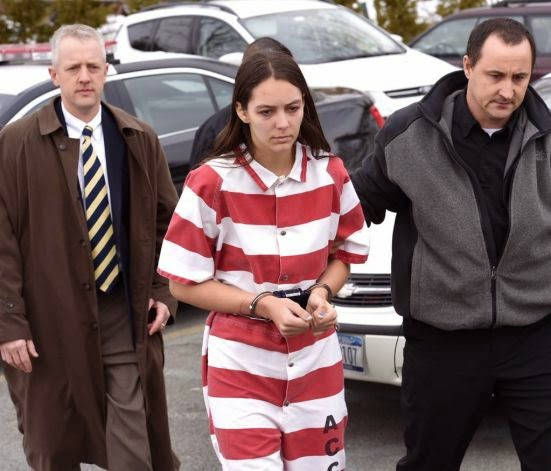 The fake 911 call has not been released yet...should it be released, we will post it with analysis.


A 19-year-old woman is charged with murder in the death of a 5-year-old boy in her care, after she told police he had been abducted by masked men in upstate New York, the Albany County Sheriff said Friday.

An Amber Alert was issued yesterday for Kenneth White after a 19-year-old caretaker reported he was kidnapped from an Albany-area home. Hours later, White's body was found "intentionally covered with snow" near the home where he lived with his legal guardians, according to Albany County Sheriff Craig Apple.

Tiffany VanAlstyne was charged with second degree murder in the boy's death after her story "started to not add up," Apple said. VanAlstyne, who is in police custody, is the teenage daughter of Kenneth's legal guardian.

Apple said the boy was strangled in what he called a "senseless death." He said the child was "thrown away like a piece of trash."

"It’s simple and it's sad," he told reporters during a press conference Friday afternoon.

"This was not an abduction," Apple said, noting that a motive has not yet been determined.
"The investigation is not over yet. We still have some leads to follow up on."
The child's body was found early Friday by a sheriff's K-9 unit conducting a search in the rural hamlet of Clarksville, 10 miles southwest of Albany. His remains were discovered in a culvert across the street from the trailer where he lived.
VanAlstyne allegedly told police that two men wearing black ski masks entered her house in the neighboring town of Berne, pinned the woman to the floor and took the child at about 1:30 p.m. Thursday. She told police the men drove off in a pickup truck.
Kenneth's mother lives elsewhere in New York and his father lives in Massachusetts, Apple said.
Apple said the boy has a twin sister and another sister.
News of the boy's death shocked residents in the rural hill towns west of Albany, described by Apple as a close-knit area where everyone knows everyone.
Kenneth lived in a red-and-white striped mobile home on a rural road in Berne. Police vehicles were parked outside the home Friday morning, blocking access to the road.
Peter Hyatt as Statement Analysis Blog at 5:33 PM

Press: Tiffany VanAlstyne would often care for the three children, Apple said. The three children, a 4-year-old girl and White's 5-year-old twin sister, were out of school that day because of a doctor's appointment earlier that day, Apple announced.

Tiffany VanAlstyne was the only adult in the home at the time, Apple said.

After the doctor's appointment and a stop at Price Chopper to fill a prescription, the children and Tiffany VanAlstyne were dropped off at the home around 12:40 p.m., Apple said. The 911 call came 40 minutes later.

During the arraignment, Brenda VanAlstyne said her daughter suffers from bi-polar disorder, the Times Union in Albany reported

KNOX — The 19-year-old woman who claimed two masked men snatched 5-year-old Kenneth White was charged with murder Friday for killing the boy and leaving him buried in snow in a culvert across the street from the trailer where they lived, Albany County Sheriff Craig Apple said.

Tiffany VanAlstyne strangled the boy — her cousin — on Thursday before calling her mother, claiming that two men pinned her to a sofa and made off with him, a claim Apple said was a hoax.

Sadly this was not unexpected.

The reports saying what she claimed happened was just too generic.
The obligatory dressed all in black men ( at least we had 2 not the usual 3)
The claim nothing was said.
This alone is unbelievable since they would have made demands, said why they were committing said crime or even telling her what to do.

It was all too comic book ninja bad guys.

Since he was strangled this was an up close and personal killing.

Was she perhaps jealous?

If she was angry i would have expected beating.

What aren't we being told?

This kid never had a chance. His mom has 10 kids, lost custody of all but a few. Sounds like he was passed off a lot.

Who in their right mind would leave their children in the care of someone who suffers from bipolar? No, they don't all snap but some do. In fact, MANY do. Why risk your childs' life to the possibility that a bipolar sitter could inflict great harm on their child? I certainly wouldn't!

If I understand this correctly; there was no excuse for all three of these children to be kept home from school that day just because one of them had a doctors' appointment. None whatsoever.