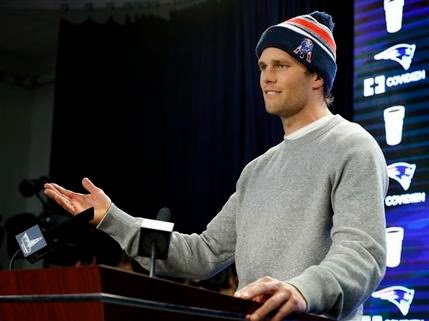 After months of investigation, the NFL has written a long report concluding:  Tom Brady did it.

You are correct Peter. The NFL could have saved time by reading here.

Words words words. Listen listen and listen some more. SA gets to the truth!

How nice that they came to this conclusion AFTER the SuperBowl and AFTER this man already received his reward.

The NFL began the investigation after the Patriots won the AFC Championship game in January, when the Indianapolis Colts complained that several footballs were under inflated.

Here’s an excerpt from the executive summary of the report prepared by Ted Wells, who was tasked with investigating allegations that the Patriots used deflated footballs during the AFC Championship against the Indianapolis Colts:

If only they had listened to the words & to you!

They waited on purpose. This whole investigation was a dog and pony show. Just to not have to face allowing a cheater, cheater, pumpkin eater the privilege of playing in the super bowl. Cowards.

Bob Costas: “The league’s investigation will not be concluded until after the Super Bowl. So these are questions, not accusations. If Tom Brady can tell the difference between 12.5, which is the minimum allowable, and 13.5 which is the maximum allowable, and if the ball was inflated to something less than 12.5, 11 or 11.5, wouldn’t he have been able to feel that? He’s a pro. He’s been doing it his whole life. Wouldn’t he be aware?”

Tom Brady: “Well, I think that’s — you know, it’s all up to the individual. On that particular night, you know, I was facing a great defense. you know, it was a wet, chilly night. It was — you know, things are happening pretty quick. So, you know, the last thing I was thinking about was — was, you know, how the ball was inflated. I thought I was trying to deal with the — how I — how the ball felt in my hand. And — like I said, it felt pretty good all night.”

Costas: “Another question frequently asked, whether it be an equipment guy, a ball boy, whatever — hard to believe that that person wouldn’t deflate the ball beneath 12.5, the minimum allowable, without at least having the notion that that’s how Tom Brady wants it, whether you told him that or not. Is that a fair assumption?”

Costas: “Are you confident that in the end that fans will be able to say, ‘I have no doubt about Tom Brady, that he’s on the up and up?’”

Brady: “I think — look, everybody’s entitled to an opinion. And, you know, when you play for one NFL team, there’s 31 other NFL teams out there. And they’re probably not much of a fan of you. I mean, if people want to feel whatever they feel, that’ s — it — I have no problem with that. They’re certainly entitled to those beliefs and those feelings. I realize it’s not about me. Not a lot of people know who I am and know what I’m about. And the people that do — you know, they do know what I’m about and what I stand for.”


Costas: “If the Patriots didn’t have the past history with Spygate or whatever and however people may feel about Bill Belichick, do you subscribe to that belief that it’s closer to gamesmanship than it is to anything worse than that?”

Brady: “Well, like I said, I — I’d like to just wait for the facts to come out before, you know, you — you– you can talk about anything of those things. you know, in some ways to make judgments based on things that I know nothing about — you know, is — is not really fair to whatever the process will end up being. We’re under tough scrutiny, you know…we’ve won a lot of games, and people are very critical of what we do, and they’re critical of a lot of teams. Part of being in this profession is that you’ve got to take the good with the bad. But I’m O.K with it. Our team is O.K. with it. We’ve had great focus this week. Hopefully our best is going to come through on Sunday night, and that’s where our focus has got to be.”

Costas: “And what I hear you saying is, no matter what may or may not have happened, you had no prior knowledge of it.”

Brady: “I…you know, look, I’ve talked about that in the past, and I don’t want that to continue to be a story about this particular game. All the facts will come out after the Super Bowl, and however those facts come out, you know, that will be news to me as well. So that process will all take place at some point. I’m excited about the Super Bowl, and that’s where my energy is. I think there was a little bit of an energy drain, like I said, with my emotions and feelings being involved earlier in the week, but, you know, I’ve got to be able to move past those things and compartmentalize those things, and be mentally tough enough to go out there try to shine through.”

Texts between Brady, and accused ball deflated Jastremski after the story broke.