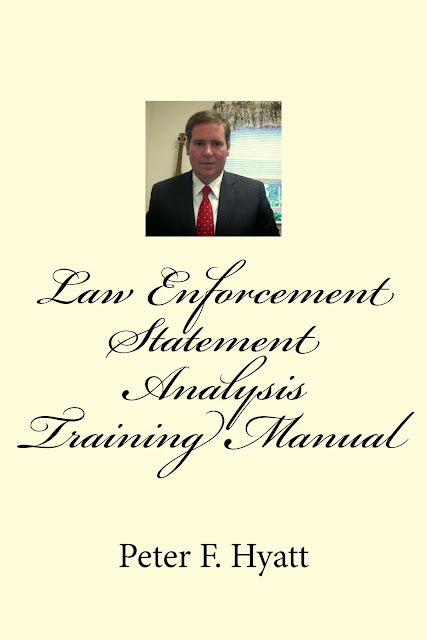 There are a limited number of seats for a rare weekend training seminar February 6 and 7th, 2016 in Seattle, Washington.

If you are in the Seattle area and wish to attend, contact us through Hyatt Analysis Services for more information.

It will be an intense, fast paced seminar...

Details to follow...
Peter Hyatt as Statement Analysis Blog at 8:48 AM

OT kind of. I'm reading a book about Kathy Stobaugh, a mom and almost x wife that disappeared and was never heard from again. The last person she saw was her so to be ex. I was pleasantly surprised when one of the policeman investigating the case, brought the husbands written statement to his brother for SA. His brother was doing a refresher course on SA and used it as a class project. They found the husband deceptive in many areas. They further contacted a SA professional who found multiple times he was deceptive. It was nice to see that some LE in the case took SA very seriously!

OT
Peter, I would like to see you analyze the statements released by Bergdahl. I'm including some here.
“Doing what I did is me saying that I am like, I dunno, Jason Bourne…. I had this fantastic idea that I was going to prove to the world that I was the real thing,” Bergdahl said. “You know, that I could be what it is that all those guys out there that go to the movies and watch those movies, they all want to be that, but I wanted to prove that I was that.
Suddenly, it really starts to sink in that I really did something bad. Or, not bad, but I really did something serious.
I don’t know what it was, but there I was in the open desert, and I’m not about to outrun a bunch of motorcycles, so I couldn’t do anything against, you know, six or seven guys with AK-47s,” Bergdahl said. “And they pulled up and just…. That was it.”

He was interviewed by the Serial Podcast people. There are other quotes, no questions included, so I don't know how the answers relate.

I'm still waiting for you to offer a seminar specifically for parents. I'd be first in line to sign up! :)


It would be nice to meet people in the Seattle area.

many departments are using it but behind the scenes.

Here it is highlighted, but in cases, it is a tool that guides the investigation.

Re: The format of comments and replies to comments

I don't know if anyone has already suggested it, but you may want to consider enabling the feature where people can respond to comments directly in line (as a sub-comment, of sorts, much like in Facebook), called "threaded comments." This as opposed to single-level commenting below all other comments, and having to "tag" previous commenters, which may or may not even get seen.

To enable this feature, you would go to the Blogger dashboard, and click on "Settings" on the left-hand side. This will drop down a list of options. Select "Posts and comments", and set "Comment Location" to "Embedded."

Can you please do an analysis on this --- Hate language at a football game. The article is long and all first person. http://www.startribune.com/my-run-in-with-hate-speech-at-a-minnesota-vikings-game/361117251/

I am very sorry for hijacking this comment feed. I noticed that you followed the change I suggested above, but it is only showing on the mobile version of this site. I am not entirely sure how to fix that, but I ***think*** that if you go back to the dashboard, click on Settings, then select Other, and then for "Allow Blog Feed" select "Full", it will fix this issue. But again, I am not entirely sure of that.

This is the last comment you will receive from me suggesting how to tweak your already great blog. :)

Peter, you have got to come to the UK (please ta nicely)

Wow. Great opportunity for a few lucky peeps! Wish I could be one of them... I'd definitely go if I could. To all who can make it, have a large time! Enjoy. ABB

Anytime in The Netherlands? ;-) j/k Have fun in Seattle.

Anytime in The Netherlands? ;-) j/k Have fun in Seattle.

I would love to see the Netherlands.

Was the symbol something asian?

Any chance you've got Canada set for future dates, Peter?
More specifically, Toronto¡!
I'll be the first to sign up, should that be the case! ;+)

Peter, I am near Seattle, but can't locate info on the training in the website. Am I looking in the wrong place?

I'm near Seattle, but disabled and would need to make transportation arrangements; what is the location and price?
Thanks!

Where do you live?