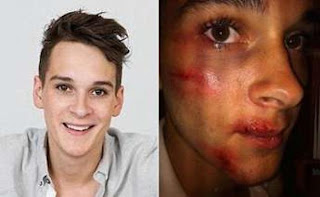 As originally researched by Mark McClish, who sought out information from others, including investigators, who were asked to learn if his theory would hold water, received confirmation that:

When someone is going to lie, and will choose a number, the liar will often choose the number "3", with the exception when asked, "How many drinks did you have?" in which the most common answer is 2.

Charlie Rogers was assaulted by "3 masked men" in August.  Perhaps they were the same who attacked Joseph Baken in July.

Here, this man said he was beaten up by 3 "homophobes", because he was homosexual.  Later, video appeared that showed that his injuries came when attempting a gymnastic flip.

A 22-year-old Montana man who told cops he was beaten up by gay-bashing thugs while club-hopping on his birthday — igniting calls online for protest against homophobic violence — made the whole thing up and actually injured himself, he admitted.
Joseph Baken, of Billings, suffered the bruises and cuts to his face when he smashed it against a curb while attempting to stick an Olympic-style backflip in the street, he said.

A man invited him outside for a cigarette, and he and two other attacked him, Baken claimed, according to NBC Montana.
Photos of Baken's battered face were posted on Facebook, Tumblr and other social media sites, prompting an outcry against homophobic violence and calls for protest.
However, a tipster sent a video to the Independent that showed Baker trying to impress his pals by doing a backflip off a curb sometime around 2:30 a.m. on Sunday.
Baker flubbed the stunt and landed on his face.
The newspaper passed the video on to police, and Baken quickly copped to lying about getting jumped.
Missoula police said they decided to file charges in-part because Baken's story caused so much outrage.