One of the most horrific crimes, with the chilling video of the monster carrying the little girl in a hotel is forever sketched upon my mind.  I wish I had never seen it.

FAYETTEVILLE, N.C. — The man accused of buying, raping and killing a 5-year-old Fayetteville girl in November 2009 could face the death penalty, if convicted in his trial next month, after a judge denied a defense motion Friday.
Mario Andrette McNeill, 32, has been charged with murder, kidnapping and rape in the death of Shaniya Davis, whose body was found in a kudzu patch near the Lee-Harnett county line on Nov. 16, 2009, six days after her mother, Antoinette Nicole Davis, reported her missing from her Fayetteville home.
McNeill's attorneys asked that the state be barred from seeking the death penalty in the case, but Superior Court Judge Jim Ammons denied the request. The basis for the motion wasn't clear.
Defense attorneys Butch Pope and Terry Alford also asked to delay the trial by 60 days to give attorneys more time to review video from four cameras at the mobile home park where Shaniya was taken. Ammons denied that as well.
Ammons said he would decide which crime scene and autopsy photos prosecutors can show to the jury after the defense asked that none be shown.
McNeill said nothing during the brief hearing – his last court appearance before jury selection begins for his trial on Feb. 18.
Authorities say Antoinette Davis was complicit in her daughter's death. Arrest warrants stated that she "did knowingly provide Shaniya with the intent that she be held in sexual servitude" and "did permit an act of prostitution with Shaniya." 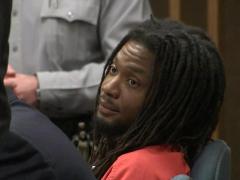 An autopsy determined that Shaniya died of asphyxiation and that injuries she suffered were consistent with a sexual assault. A medical examiner noted in the autopsy that investigators believe the girl was used to pay off a drug debt.
Antoinette Davis is charged with first-degree murder, indecent liberties with a child, felony child abuse, felony sexual servitude, rape of a child, sexual offense of a child by an adult offender, human trafficking and making a false police report.
She also had been scheduled to go on trial on Feb. 18, but prosecutors said her trial will start separately, likely in March. Prosecutors aren't seeking the death penalty against her.
Peter Hyatt as Statement Analysis Blog at 8:59 PM

If ever the death penalty should apply..

This is a horribly sad case! I plan to attend as this will be a local trial for me. I appreciate the update.

Awful case! What a shame Antoinette will not face the death penalty aswell!


HALLANDALE BEACH, Fla. – Investigators found human remains Friday in the former backyard of a South Florida couple whose baby hasn't been seen in more than a year.

Calvin Melvin and Britney Sierra were arrested Friday on neglect charges after a child-welfare worker acting on a tip from an abuse hotline went to their new home and found only two of their three known children.

Police said Dontrelle Melvin was 5 months old when he was last seen more than a year ago and his father has given detectives conflicting statements on where he is.

The state Department of Children and Families said Calvin Melvin and Sierra aren't married and have an on-and-off relationship. Melvin is the father of Dontrelle and one of Sierra's other children, but not the third.

The agency been involved with the family several times over the past few years, but officials declined to give details. The other two children, whose ages weren't known, were taken in DCF care this week.

Police say Melvin, 27, told them early this week that Dontrelle was living with his parents nearby but when investigators went to the parents' home, they said that was untrue. When investigators went back to Melvin's home, he had disappeared. He went to the police station Thursday to be interviewed and was later arrested. Police said he has changed his story several times, including that the baby was in New Jersey with relatives. Later he said he dropped the child off at a fire station.

Adding to the confusion, detectives said Sierra called police last October and complained she hadn't seen Dontrelle in a year and that Melvin wouldn't tell her where the child was. A police officer then called DCF, but police did not launch their own investigation. No reason has been given.

DCF officials said they did not follow up on the call because there was no allegation by the mom of abuse or neglect. The agency does not investigate custody disputes. The agency said "missing child" cases and potential criminal cases remain under the investigative authority of local law enforcement.

"This is an awful and senseless tragedy. We are working very closely with law enforcement to provide information. The investigation continues," DCF spokesman Joe Follick said.

At the couple's former home Friday, neighbors gathered while detectives and two cadaver dogs worked in the backyard. They focused on one corner as authorities used chainsaws to clear out overgrown brush.

Mahmud Lama, who moved into the small green house with a chain link fence about six months ago, said his Labrador retriever used to spend hours digging in the spot where authorities were digging. He later saw detectives remove a wooden box from the yard and officials carried away the remains on a stretcher.

Neighbors said the couple, who moved just a few blocks away, always argued.

"They fuss and fight all the time," said 46-year-old Sharette Brown, who currently lives next door to Melvin.

Rosetta Braham, who also lives next door, said she was shopping with Melvin's grandmother in August when she abruptly brought up the baby.

"She said she had a dream, a guilty feeling that something bad happened to the baby," Braham said.

At one point, Calvin Melvin told neighbors the baby was in New Jersey with relatives, but Brown and Braham said the couple kept changing their stories.

I agree NF!! Both should get the death penalty. This is horrible and difficult to just read. I can't begin to imagine how much this little girl suffered.

This man deserves worse than death. So does the mother. bastards!

He deserves the General Population.

Will the anti-death penalty activists rush to help this degenerate like they did Casey Anthony?

^^ I agree!!! A quick painless death is too good for these people.

Sadly is one monster of many hiding among us.. laws need to be change and threat this crime worst than drug trafficking and stealing bec a child is not a toy.