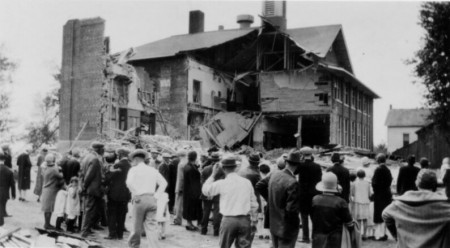 An alarm clock detonates a 500 Lb dynamite and pyrotol bomb that Kehoe had hidden in the north end of the school basement. The explosion lifted part of the building several feet before it collapsed. First-grade teacher Bernice Sterling: “After the first shock I thought for a moment I was blind. When it came the air seemed to be full of children and flying desks and books. Children were tossed high in the air; some were catapulted out of the building.” Volunteer rescuer Monty Ellsworth: “There was a pile of children of about five or six under the roof and some of them had arms sticking out, some had legs, and some just their heads sticking out. They were unrecognizable because they were covered with dust, plaster, and blood. There were not enough of us to move the roof.”
Peter Hyatt as Statement Analysis Blog at 2:31 PM

For those whose bent and intent is to steal, kill, and destroy . . .there will always be a way.

That is incredible, dadgum.

There are some really evil people who walk amongst us.

This came to my mind:

" And war broke out in heaven: Michael and his angels battled with the dragon, and the dragon and its angels battled  but it did not prevail, neither was a place found for them any longer in heaven.  So down the great dragon was hurled, the original serpent, the one called Devil and Satan, who is misleading the entire inhabited earth; he was hurled down to the earth, and his angels were hurled down with him."

Evil people are infected by them. Mankind can't think of this sick things on their own.

I'm glad that you posted this, Peter.

School disasters perpetrated by monsters are not new events.

Revenge killing is as common to mankind as waging wars.

Another lesson that goes along with humiliation and the retaliation associated with it....