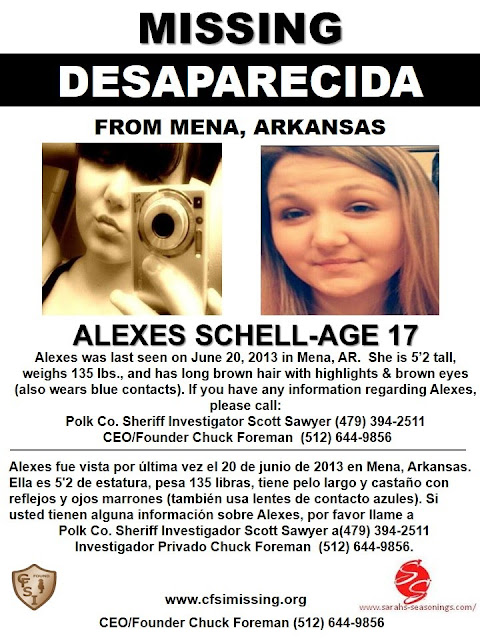 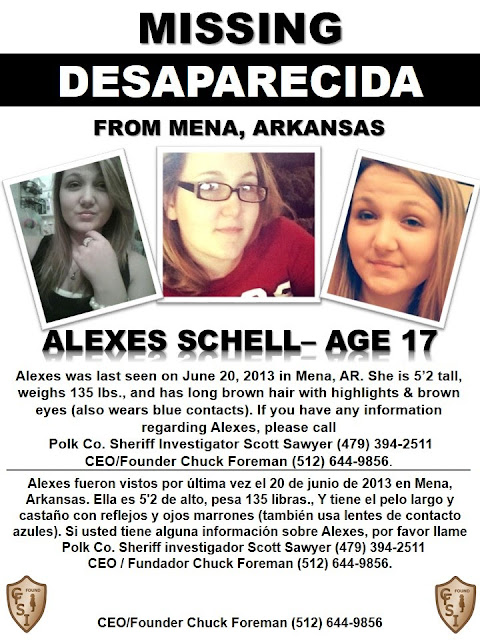 I hate to see another young girl is missing :(

On another note, I'm watching the Dr Phil episode from today (Casey and Sandy Parsons) on DVR and I'm sad to say...Erica Parsons is dead.

ALL of the mother's reference's are past tense. She can provide no information about where her daughter is, or who she is with...despite her insistance that she was contacted (on Facebook and eventually by phone) by a woman claiming to be the adopted girls biological grandmother (paternal). When pressed for details like the address of the woman's home, the phone number they used to communicate, etc..she claims to have none of this info, blaming the internet phone line and claiming that she never knew the address, but had pictures of the property (which surprise, she no longer has either).

After Dr. P's opening this is the first statement by the adopted mother who police say are not co-operating with their investigation, and fabricating the story about Erica living with a relative.

Mother:
"Erica IS our adopted daughter, and she IS also our niece".

"She WAS a wonderful little girl, I made sure Erica always GOT TREATED just like one of my other kids."
"I do believe we WERE the model parents, and all of our kids needs WERE MET."

-Besides the glaring past tense references, the mother clearly draws a distinction between her own children and Erica, even as she strives to convince us otherwise.

I will work on transcribing their statements from the show, they are very telling and great for SA.

Jen - Did they release the polygraph results?

I am at work but saw that they were going to do a polygraph on the show.

The other thing that I find just wrong, is that they basically just let her go live with someone they didn't know. That is just not normal.

I mean you dont get some email and just send a kid off.

And has anyone read/heard anything about how they claim Erica even got to the grandmas house?

Polygraph is tomorrow, as well as a woman who the mother (Casey Parsons) served as a surrogate for years ago. This woman claims that Parsons is a despicable person who 'tried to steal her baby' and conspired to sell her baby, leading at least two other couples to believe she was carrying their baby (when she was pregnant with her child). I'm interested to hear the details of this story as well as the poly results.

The father Sandy takes ZERO responsibility, claiming to have never met, seen or spoken to the fantom 'Nan' that he sent his daughter to live with (although he also says he was present the 'last time' they dropped her off. He cries (and so does she) about the fact that they haven't seen their OWN children for two weeks due to these accusations, (which they blame on the fact that they lawyered up, claiming CPS was called in 'because we got a lawyer'...uhhh, maybe it was your missing kid?). But show no emotion about not seeing their adopted daughter for two years and not even being able to say for sure if she's alive!

I will have to DVR that show too. Very curious....

And so they dropped her off but have no clue where she is. Also scary.

I feel so bad for these kids. They are treated worse than animals.

They claim to have dropped her off at a McDonald's, and say that the last time they saw her she was getting into a car with, (I'm not making this up) a girl named STRAWBERRY, 'Nan', Erica's half sister by the same father, and 'a pretty little bald-headed baby with earrings', that belonged to the half sister.

They say that a '3' week visit was planned, but about a week before Erica was to return home 'Nan' called asking to extend the visit...which she agreed to. (It's important to note that all of these supposed calls would have been long-distance, yet no record of them exists). Then the Mom claims that they (the family) were invited to Erica's birthday party at 'Nan's', and later 'un-invited' by phone (where Mom claims to have overheard Erica saying, "I don't want that bitch at my party".

Mom claims to have tried to call on Erica's birthday only to find her number had been blocked...yet, she didn't call the police or drive to where she thought her daughter was...she just figured Erica was being rebellious, and left her alone. She claims when she later called the phone was disconnected and remained that way for MONTHS, until someone else took over the number. The whole story stinks to high heaven and Dr P. even compared their story to Casey Anthony's 'Zanny the Nanny' tale.

BTW-their son called police and told them the father 'killed Erica, chopped her up and buried her in the back yard'.

I hate to intrude on this post but the Dana Clair Edwards' case reveals a tremendous amount of information on the tenacity, intelligence and ethics of a Texas prosecution team:
http://www.cbsnews.com/8301-18559_162-57557868/brutal-murder-of-dana-clair-edwards-shocks-tony-texas-town/

I found it interesting how many times Dr.Phil inquired if they were concerned NOW about Erica, with almost no reaction. Dr.Phil also repeatedly asked if the parents are considering that they had been fooled/conned now that they can't find the grandma. They didn't really answer until pushed. -They didn't answer because they know Erica isn't with the missing, non existent grandmother, they know something happened to her. They are like deer in headlights-IMO
Dr.Phil called them on missing their other children already when Erica had been gone so much longer without concern.
These folks should be locked up just for their neglect of parental duties.
They act so strange, the public thought CA was bad, these folks are even worse.

I agree, its terrible. It was hard to even listen to their ridiculous lies, and even before Dr P pointed it out I was already thinking..'Damn you Casey Anthony, and the twelve half-wits that helped you get away with murder'!

Now people like the Parsons have a blueprint for how to get away with murdering their kids...

-Make sure a lot of time has passed before they are reported missing...check.

-Report false sightings of 'missing' child, after the last time they were seen with them...check.

OT:
Maybe this is some info that will help you lay the subject to rest Peter. It looks like she is guilty. Please analyze her full ask.fm statements and commit one way or another. I want to know what you think. John posted the full transcripts twice.
http://edition.cnn.com/2013/08/21/us/hannah-anderson-james-dimaggio-case/?hpt=hp_inthenews

So I have not yet been able to watch the show as my DVR didnt record, but read online today that the dad failed the poly and mom refused.....

I dont get why at the least LE cant prosecute them for endangerment.

She was legally their child. If she is going to live with another person, there should have been paperwork done as the grandmother can not put her in school or do anything for her with out being a legal guardian.

That alone should be justification to charge these people as they clearly were not ensuring the girl was going to be properly cared for
with all the things that with out legal guardianship is required for.

I just watched part 2 of Dr Phil...the mother disqualified herself (ala Mark Redwine) by claiming to be in pain...she told the polygrapher her pain was a '9' on a scale of 1-10...10 being the worst pain imaginable. Dr. Phil offered to administer the test after she took her pain meds and rested overnight...she refused.

The father indeed failed the poly (he was 'strongly deceptive') for these two questions:

"Did you deliberately cause Erica's disappearance"?

"Did you have a plan to cause Erica's disappearance"?

Polygrapher explained that the numerical scoring format was as follows:

"In order to be ruled 'deceptive' the response would have to be scored as -4 or more...his responses scored at -9...strongly deceptive".

The Parson's refused to return, either in person or by camera from their home, for the reading of the results. Instead their attorney appeared by camera, and after the results were read he fumbled, bumbled and finally 'acknowledged' that "WE know there are problem's....logically...with their STORY". Their attorney then reminded everyone that polygraphs are 'not reliable', and was quickly corrected by the polygrapher, who stated that they are reliable and are now admissible in federal court.

Most telling to me is that both parents refuse to accept that they did the wrong thing and insist they did nothing wrong, and that they still believe Erica is with her grandmother. It also came to light that the Parson's recieve 'benefits' in Erica's name that they have continued to collect while she has not been in their custody. They also declared that they would sign over custody to 'Nan', if she would just come foward and clear their name. Dr.Phil jumped at the suggestion, and asked why they would consider that if they are indeed telling the truth and this woman practically stole their daughter away from them,and caused them all of this trouble. Their response was that they would do it 'if that's what Erica wants'. What a twisted web of lies!