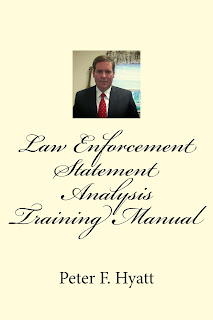 We will now be hosting monthly online training for those of you in the Pacific Coast Time zone beginning on Thursday, February 25th, from 9am to 3pm, with 2 short breaks and one half hour break for lunch.

This training is accredited by the University of Maine's Continuing Education Units for those of you who either have a professional license or who wish to build your resume.

This training will be at Go To Meeting and is restricted to those who have been trained, and approved for this specific ongoing training.

Go To Meeting is quite 'comfortable' in that you participate mostly through typing, and can take calls, see clients, etc, while not disturbing the meeting.  If you commit to a year's worth of training, there is a 25% discount, and should you miss a session, there will be many opportunities to make them up.

The training is confidential, with approved attendees entering into a Confidentiality Agreement and is useful not only for training in Statement Analysis, but for the advanced training, psychological profiling and anonymous author identification.

Upon approval, we will be working some live cases as well as personal cases, and this includes law enforcement, military as well as Human Resources, attorneys, therapists, and will be handling disputes, fraudulent claims, etc.

For those of you who have not been trained, please go to Hyatt Analysis Services where you may take the training as an individual, or your department or company may host a 2 day seminar.  Successful completion of the initial training course allows you to sign up for the ongoing monthly training.

The ongoing monthly training is made up of analysts from all fields, including criminal, psychological, business, military, security, and so on.  Its intensity is such that the time between trainings is valuable for processing and recovery, while the analyst works on unrelated statements daily.  This will also prepare the analyst for our Advanced Course which focuses upon the linguistic profiling and anonymous author identification that the analysis yields.

In the personal course, the student is encouraged to take his or her time, and work through each chapter carefully and repetitively in the reversal of the process of 'dulled listening' we all do.

As each training has limited number of spots, should we go over, we will schedule another day, but we do stick to the same day of the week, month after month.

Two years of sustained regulated training, along with daily practice, will produce an expert in lie detection.

There are no short cuts and there is no excellence in this world that comes but through dedication and hard work.

*To be eligible for the ongoing training, you must have formal training beyond '101' training.  Introductory training is great to have, but by itself, it can lead to error and discredit our science.

Successful completion of the course is mandatory for the soon to be released Advanced Course.  This includes the chapter tests and final examination.

Published on Feb 10, 2016
A toddler was reported missing Wednesday morning in Iron County.
The child, identified as three-year-old Titus Tackett, reportedly wandered from the Lake Killarney area in the Arcadia Township. Titus was last seen wearing a diaper.

Family friend Tiffany Thomlinson said the Titus' family realized he was missing around 1 a.m. and found the front door had been opened.

Because the surrounding area is heavily-wooded, the family is asking anyone with an ATV to help in the search. People can head to Killarney Shores off of Highway 72, just out of Ironton.

This is a developing story.

FOX 2 will keep you updated as details become available.

IRON COUNTY, MO (KTVI) - The body of a missing toddler has been found in a van a half mile away. Police and dogs were searching for Titus Tackett in the bitter cold since early Wednesday morning. A blanket was draped over the child's body.

The person who lives at the home where the van was parked spotted the child's body in the vehicle at around 11am. It is unclear how he got in the van.

An autopsy will be conducted on the child's body to determine if there was any foul play. Police are still investigating how the child got out of the home. He was found about a half mile away from his grandfather's home.

The 3-year-old reportedly wandered away from his the house near Lake Killarney area in the Arcadia Township. He was last seen at around midnight.

Family friend Tiffany Thomlinson said the Titus' family realized he was missing around 1am and found the front door had been opened. He was last seen wearing only a diaper or underwear. Temperatures in the area have been below freezing.

Titus lives in Potosi with his mother and grandmother. He was visiting the area when his parents left him at home with his grandfather.

Authorities say the toddler has been caught before trying to escape.

Tiffany Thomlinson. Friend of the family.

Answer: "The last thing that (we've) seen of him, erm, (they) couldn't find him, the front door was wide open. The last thing (we) seen him wearing, he was in his green underwear he didn't have any shoes on."

She avoids the question.

Note the broken sentence. She begins to answer then stops. Why would she not finish her sentence? She is holding back information.

She then goes beyond the question and brings in the door being "wide open" and what he was last wearing.

Q "Tiffanny, if you can help paint the picture again. Was he in his own bedroom was he near Mom and Dad perhaps?" Maybe other family members who was closest to him (the last time they actually saw) him in the home?"

Erm..His (Mother) and my brother.

Reporter: "And that was about 6 hours ago"?

I age, she doesn't answer the question.

Covering the body is usually a sign of undoing, it is done by someone known to the victim.