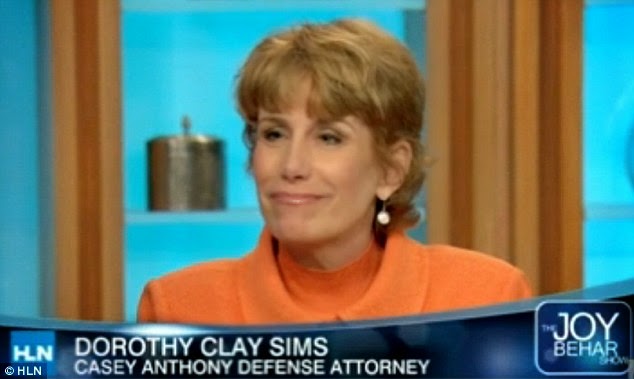 Dorothy Sims was the attorney for Casey Anthony who was frequently photographed hugging and holding Casey Anthony.

It was a shrewd move on her part, knowingly antagonizing the public, searing into the public mind Ms. Sims' own name and face, for a large amount of publicity that would have cost a fortune.

After the trial, CNN host, Joy Behar asked her if she would let Casey Anthony babysit her own children, seeing you "believe she is innocent" of the death of her daughter, Caylee.

Q.  Would you let Casey babysit your kids?  You say she's innocent."

This is to avoid the question.  This pause shows sensitivity as it highlights the need to think.  Since she was seen hugging and holding Casey Anthony, and she has stated that she believed Casey was innocent, what would cause the pause to think?

Avoidance.  When one avoids the question, the question itself is said to be "sensitive" to the subject. Diverting the attention away from the question is a form of avoidance that seeks to move the conversation away.

Statement Analysis notes the need to change the topic, or avoid answering the question.  In Analytical Interviewing, we allow the subject to "run the mouth" off in a tangent, while many instruct Interviewers to "control" the interview.  This is a critical mistake.  By letting the subject run off the topic, the subject must choose words from the very brain that knows the truth.  In the tangent to the patient ear, information may come.

We do bring the subject back to the question, no matter how far, or how long the subject has gone in another direction.  We do this in a stoic manner, not ruffled, nor upset.  This often unnerves the subject as he (or she, in this case) see our resolve for information.  I have listened to subjects take a question, avoid it, go off in a tangent and do so, rambling for more than 30 minutes.

I listen without a word.

Then, I repeat the original question.  If the tangent runs again, I take careful note of the words chosen.

Then, I ask the original question again, in an even voice, void of emotion.

It is not easy, but when critical information is needed, the Interviewer must believe that the subject is going to reveal the information and he is not going to "outlast" the interviewer.  I often keep a small snack in my briefcase, prepared if blood sugar levels drop and fatigue set in.

I like to send the signal to the subject:

"You have the information.  I do not. You are going to tell me everything I need to know.  I will not lose."

I do this by the means of body language and voice inflection.  Irritability is the enemy of information, and the friend of guilty subjects.

This cannot be done on television.  Joy Behar is not patient, nor can she be, but she did exhibit a good "bs meter" and did not mind repeating herself.

The subject revealed a pause, and a divergent.

Pronouns are instinctive.  The pronoun "I" is the single easiest word in the English language; something that each of us has used, literally, millions of times.  It is fair to say:

We don't get it wrong.

Since we are so good at pronouns, particularly, the pronoun "I", we take careful view of when a non-stuttering person stutters on the pronoun "I" and we find:

two (2) "I's" in a statement, the subject is experiencing an increase in stress at the question.

three (3) "I's" in a statement and the subject is experiencing anxiety at the question.

four (4) or five (5) "I's in a statement and the subject is close to a nervous breakdown.

six (6) or seven (7) and the subject is likely going to be hospitalized.

This is extremely rare and will likely only be found in a homicide in which the subject had a close personal relationship with the victim.  The emotions would be intense in this homicide.

Dorothy Sims stuttered, as a non-stutter over this question.

We have sensitivity indicators regarding the question:

1.  Pause:  A need to think.  This is especially noted in a person of higher intelligence like Sims.

2.  Avoidance:  Sims does not want to answer the question.

3.  Anxiety:  Sims, a non-stutter, stumbles on the pronoun "I", the very word that she has used millions of times, regarding the question, "Would you let Casey Anthony babysit your kids?" particularly in context of having not only declared her innocent (was she referring to judicial innocence only?) and having shown a personal, 'touchy-feely' relationship with one who not only killed her own daughter, but one who was able to ride around with her daughter's dead body in the car, go out partying, and hold up a lie, even while walking down a hallway with seasoned detectives:

Dorothy Sims publicly embraced someone who's character is acutely sociopathic, cold, and murderous.  It is not surprising to see this cause her stress when questioned. 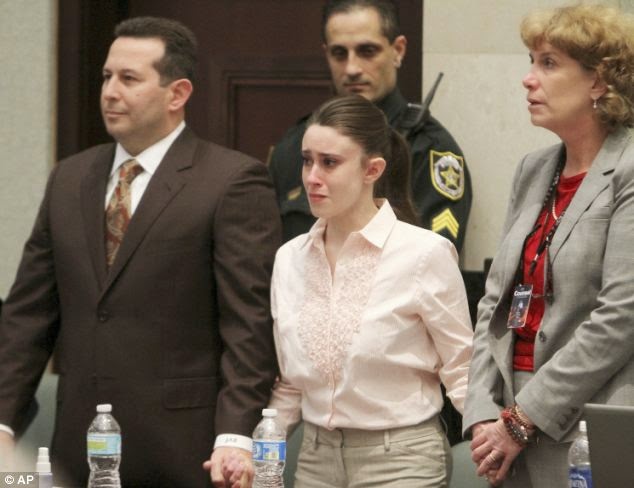 This may have been in her mind as she was asked the question.  It is one thing to hug and hold her, it is another thing to consider Casey Anthony alone with her beloved children.  I imagine that this question provoked in Sims, not only the hypocrisy of her actions, but perhaps her memory went back to the time in life when her children were young, vulnerable, and babysat.  For parents, mothers especially, trusting our little ones to a babysitter is not easily done. Sims could not bring herself to say she would let Casey Anthony babysit her own children, in spite of her public claims.

Even for publicity seekers, there is a price to pay.

Next up:  Terms of Endearment and Devotion when found in statements.

Peter Hyatt as Statement Analysis Blog at 8:58 AM

With any attorney it's just business as usual. No more, no less.

Great example! I imagine she was also thinking of how her children would react if she said yes now that they are older and would understand.

I think that it is possible that Dorothy Simms actually started to consider whether or not she'd let Ms. Anthony babysit children of hers and when the thought entered her mind that her children were older, she found immediate relief from the discomfort of dealing with even the prospect of her own little ones being in the care of Casey Anthony- and blurted that out.
Who would want to ever think about their own children being in the care of a baby killer - someone who could kill their own child! It is so hard to imagine that someone can kill any two year old but that she could kill her own daughter is almost unfathomable. I think that the unfathomability of it helps people like Dorothy Sims grab onto any possibility that Casey may not have done it. As Peter pointed out, this was good PR for Dorothy and as long as you choose to ignore the known facts you can fall for the charms of the psychopath and the minute of fame as you come alongside them.

I think I'm on the Joy Behar level because I don't think could wait that long (30 minutes!!!!) and listen to someone avoiding my question. Not only would it be frustrating, but I would wind up with even more questions and that would make me even more frustrated worrying that I can't even get my first question answered let alone having more new questions! Ugh. It's a cat and mouse strategy. I'll have plenty of practice with my kids though!! Between the computer and texting, it's a battle of wills over keeping them safe.

I get we have jobs to do and have to sometimes act professional to those we hate but even as an attorney you aren't obligated to hug and hold hands with your client. She choose to take it too far.

But the fact is Casey Anthony is crazy and I doubt a theres a normal person on this planet that would leave their child with her.

But as a parent, I have to still question her motives. Like I said its one thing to be professional but she choose to be affectionate to a horrible woman who even if she didn't kill Caylee (which I think she did) she still choose to party while the kid was missing.

It is good business for the attorney representing a guilty client to buddy up with and hug up too the client, even providing their clothes and personal items for court and media appearances. The families of defense attorneys know this strategy well; this is where their bread and butter comes from and this is what helps to make their lawyer parent/husband/wife successful.

Attorneys discuss more about their cases at home than you could ever guess. The atty can privately despise the client but you the next potential client would never know this. The family would know it, with all the little intricate ugly details spouted off at the dinner table.

Let the chips fall where they may; Ms. Simms and Mr. Baez (as did good ole boy Chaney)beautifully set the stage for luring in many more guilty clients with excessive fees flowing into their coffers, which is their only real goal in representing any of these low-lifes.

Regardless of what anyone thinks, Casey Anthony deserved a trial and deserved a lawyer. It wasn't about whether she was guilty or not, but about the state proving her guilt. They did not.

Their fairy tale storytelling did not line up with the evidence.

No one doubts Casey hand in the death of her daughter. But, did it happen as the prosecutor set forth?

The media made enough money off this child and this family. Why not let it go?

If only Joy Behar had grilled Simms as if she were on the witness stand. lol Lawyers can usually hack words with great proficiency. Clinton, "I did not have 'sex' with that woman."

Good statement analysis with Simms. Wonder if she took extra long, hot showers after hugging Casey all day long during the trial. She certainly looks "younger" now than she did back then.

what if pronoun "I" was dropped but "am" was retained? e.g. Am going there, Am not here.

Joy Behar let Simms get away to easily with her answer and I feel didn't follow through.She either didn't have the patience or as Joy had always stated she was not interested in the case.In fact she would become annoyed with all the visits from Jose Baez on the View as him and Barbara Walters were quite good friends.Barbara was after that Million dollar interview with killer Mom hoping if she kissed Baez's butt enough she would get it through him.Any way I think the interview with Behar and Simms proved what a liar she is and how much a high profile trial is about fame and in most cases money not at all caring about the victim and this was a toddler murdered by her won mother who showed no love or interest in her childs death.It sickened me how Casey was coddeled and treated like a spoiled brat by her defense and family.Her whole family and def. team covered up and lied for her while Dorothy Simms was the surrogate momma for Tot mom when she was told to cry on Q.Beyhar should have brought her all the way down when she had the chance.It was not a PR plus for Simms!