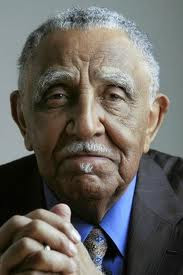 Rev. Joseph Lowery gave the inauguration blessing for Barak Obama in 2008.  He has recently spoken out about the upcoming election.
Statement Analysis teaches that words do not come from a vacuum.
In an exercise with investigators, we have them break into small groups, where one is to tell a story that is either 100% true, or 100% false, and the investigators are to listen to the language, interview the subject and draw a conclusion:  truth or deception.
It is actually difficult to outright lie because the words chosen have to come from somewhere:  an experience, a book, a movie, and so forth.  We often find that in order to make this 100% false, we must provide the volunteer with a detailed false story to work from, otherwise the story teller will begin to move into language that comes from non-experiential memory, like a movie.
Those who jest with others are often the most revelatory.  As they speak out (sometimes with a passive-aggressive tint) their words often betray them. When caught, a liar will say, "I was only kidding; I was only joking."
In a LSI training, the instructor remarked that the training was being held in a high murder rate city.  "Oh" a female police officer said, "I should drop off my husband here" to much laughter.  The instructor said, "Have you thought about killing your husband?" and she said, "No, I was just joking."
Later, on break, she spoke to him again.  He asked her about having any thoughts of killing her husband when she admitted that they were going through a bad divorce and how she thought it would just be so much easier if he died.
Listen to the words that 'jokers' use.  They do not come from nowhere.
Recent civil rights advocate recently told his congregation he used to say "all whites will go to hell."
He later said, "it was a joke."
He also said, "Don’t let them resegregate our schools" and  “I don’t know what kind of a n—– wouldn’t vote with a black man running,” said Lowery. “All that he did with the stimulus was genius. Nobody intelligent would risk this country with Romney.”

Rev. Lowery might recognize this:  "From the abundance of the heart, the mouth speaks."

“I’m frightened by the level of hatred and bitterness coming out in this election,” said Lowery.


Note the order of words chosen:  "hatred" comes before "bitterness."

Peter,now you mention the words "I was joking" I thought my god there have been numerous times I have heard that and thought nothing of it? I will pay more attention in future..

When asked by TheDC about the other notable comment — “what kind of a n—- wouldn’t vote with a black man running” — Lowery said he did not remember making that statement.

“I never said that, I don’t remember saying that,” he told TheDC.

It amazes my why, in this day and age people still use terms such as african-american, irish american, mexican american and so on.

All this causes is division.

Last time i looked if you were born in america you are american.

If you weren't born in America but got citizenship you are american.

The term african-american most noticably i feel, is used to gain sympathy, favors, credit and excuses for hardships suffered decades ago.
I am african-american you owe me big time.
It encourages a reliance on others, expectations that everything should be handed to them on a plate.
it encourages a sense of entitlement.
Why should i work, go to school etc cos you stole my people from africa.
The whites are in the wrong and always will be.
This is why we hear so often of lawsuit by countries demanding recompense for slavery.

I got into a heated discussion once on this subject.
They got a tad upset when i pointed out it was africans (and arabs) capturing neighboring tribes and selling them on to the traders and thus the west.

They got even more upset when i suggested that rather than african americans feeling hard done by as seems the case, thy should in fact be appreciative their families were taken.
I explained it as if there had been no slavery as it was back then, then all the people descended from slaves who are living today would not either be alive at all or living in abject poverty in whatever was their native homeland.
The fact their families were sold and transported back then means today they have lives they could never have hoped to achieve.
They have healthcare, education, housing, effort is rewarded, they have free speech and a democracy, they have the american dream that so many poorer nationlities can only dream of.

Slavery was wrong and is still wrong today.
Slavery although illegal flourishes in many nations today. It may not be called slavery, it can be called indentured service or whatever, the victim is still a slave.

The one good thing about slavery is that the descendants of those brought over are reaping the benefits today. Without it many may not be alive today.
Instead of thinking they are owed for sins past, make the most of what is offered and be an american.

Over here depending on where we are born we can be english,irish,scottish or welsh.
We are all however british.
We don't have groups such as indian-scottish or polish-welsh or black-irish or chinese-english.
We are an old nation which has had immigration for centuries, we don't bother with trivialities. I myself am a real hodgepodge of nationalities through my forefathers, my mom was scottish my dad welsh, i am however english or british.

Whether it is hate speech or racism, depends on who is doing the talking.

I would feel sorry for you but what you are doing is dangerous to those following you.

Bear with me whilst i look for an empty telephone box where i can change into my SuperHobs costume ( with run proof panty hose and reinforced gusset).

Hurry up in there i have to go rescue a lemons in distress.
I don't care if it's an elephant making a trunk call, hang up and move it buddy.

The more the community organizer talks while campaigning, at our taxpayer expense, the more he sounds just like his group of mentors, all of whom are haters, j jackson, j lowery, j wright, to name some of the louder ones. what a waste.