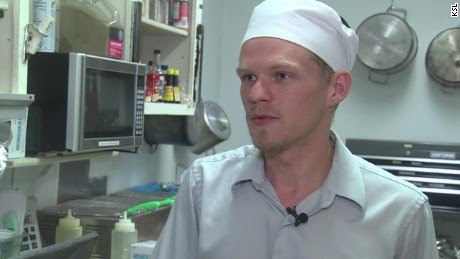 There are not enough statements to draw a conclusion yet, but thus far, we

Cannot say it happened until the subject tells us it happened;  In these short quotes, he does not tell us that it happened; The soft language is concerning.


We can set up the "expected" versus the "unexpected" and part of this means:

a.  Strong language, including "hate", "cut", "carve", blood", "murder", "attempt" and so on.
b.  Pronouns connecting the subject to the assault.

(CNN)Rick Jones sent the employees home from his family's pizza restaurant and carried the garbage out the back door.

Note that CNN reported that he sent the employees home first.

"I thought it was strange that I didn't hear it close," he said. "I was knocked out and then suddenly someone was forcing my legs and hands down and trying to get me to drink bleach."

He reports what he did not hear, though we do not know if this was a result of a  question.

Note "someone" does not specify gender of the attacker.

Note also "was forcing" and not "forced."

Jones, 21, woke up a few hours later in the hospital with a concussion, serious bruises and a message of hate carved into the inside part of his arms.
"On one arm it said 'die' and on the other arm it said 'f*g'," he said.

"it said" is passive voice.  He does not say "the man carved..." or "the attacker carved" or "cut";
Note also that "said" is soft language.

Unfortunately, he'd see those words again in coming weeks.
The assault was the first in a series of crimes committed against Jones, a lifelong resident of Delta, a town of about 3,500 people in western Utah.

"I was horrified and heart-broken to learn of this cowardly and barbaric assault," Cox said. "The Jones family is an upstanding, well-respected and beloved part of the Delta community. ... This will not stand."

"In all of my years I can't remember anything like this ever happening before, so it's something we want to get a handle on as soon as we can," Millard County Sheriff Robert Dekker told CNN affiliate KSL.
The criminals did more than hurt Jones that night. They took $1,300 from the restaurant he owns with his three sisters, Grand Central Pizzeria and Grill.

Then the crimes started to hit home. Literally.
The following day, somebody went to the home in Delta where Jones lives with his parents and sisters and spray-painted the same malicious words onto the garage door.
More than a month passed.

On June 10, Jones woke up to the sound of a crash. Somebody had thrown a Molotov cocktail through his bedroom window.

"It didn't explode but it started a fire that burnt the wall and some of my carpet," he said. "It actually landed on my bed. I ran and warned my family 'there is a fire' and I got a fire extinguisher and was able to quickly get the fire out."

Note that he ran and warned his family before he put the fire out.

Also thrown through the window was a rock that "had some writing on it that referenced homosexuality," Dekker told KSL.

That same night the pizza restaurant was robbed again, police said.
The thieves took $1,800 and vandalized the business, Jones said.

Terri Jones, his mother, said the community has been supportive and the family is standing strong.

"When you attack any member of our family, you attack everybody here. This is not just against my son, it is against every single one of us," she told KSL. "We're not going to back down, we're not going to close the restaurant if we can keep from it. We're not going to move from Delta, we're not going to be afraid. ..."
Rick Jones told CNN he's left wondering who wants to hurt him.
"I've lived here my whole live with my family," Jones said. "Nothing like this has ever happened to me before. I don't have any known enemies, but obviously I have one somewhere."
Peter Hyatt as Statement Analysis Blog at 11:08 AM

Peter, I love these exercises.
"(CNN)Rick Jones sent the employees home from his family's pizza restaurant and carried the garbage out the back door."
--There are no direct quotes here, but the reporter heard his story. This means that Rick Jones told him that he sent the staff home and carried the garbage – out the back door. It was important for Rick Jones to divulge that he carried the garbage out, but included the back door. Maybe just maybe, he is a victim of abuse. It appears to me, that on that particular day, he sent his staff home to be alone at the pizzeria. Has anyone inquired if he had plans to meet someone? Being gay, and if he lives with family, perhaps he didn’t have much privacy and wanted to have a tryst at the pizza shop? That was my impression from this statement.

"I've lived here my whole live with my family," Jones said. "Nothing like this has ever happened to me before. I don't have any known enemies, but obviously I have one somewhere."
--He doesn’t have any “known” enemies. What about unknown enemies? Unknown to the rest of the world. He has a “known” enemy now. He knows his attacker.

"It didn't explode but it started a fire that burnt the wall and some of my carpet," he said.

is the change from "the" to My" significant?

he uses the article "the" for "the wall" then changes to "my" when talking about his carpet, taking ownership?

Worse than Charlie Rogers because he did not learn the lesson that Charlie Rogers created for herself and all the other fake haters. You would think they all would have sat up and taken notice of the outcome of such ridiculous madness against themselves. Not.

The Daily Beast did an article that was much more in depth and fascinating. Only difference is I guess its not a reputable news outlet like CNN. But many more quotes from the mom, little ricky, and even the sheriff of mayberry!

I couldn't figure out why this vicious statement was going to such lengths. Then I saw it was sponsored by FOX news. God, you people are wretched.