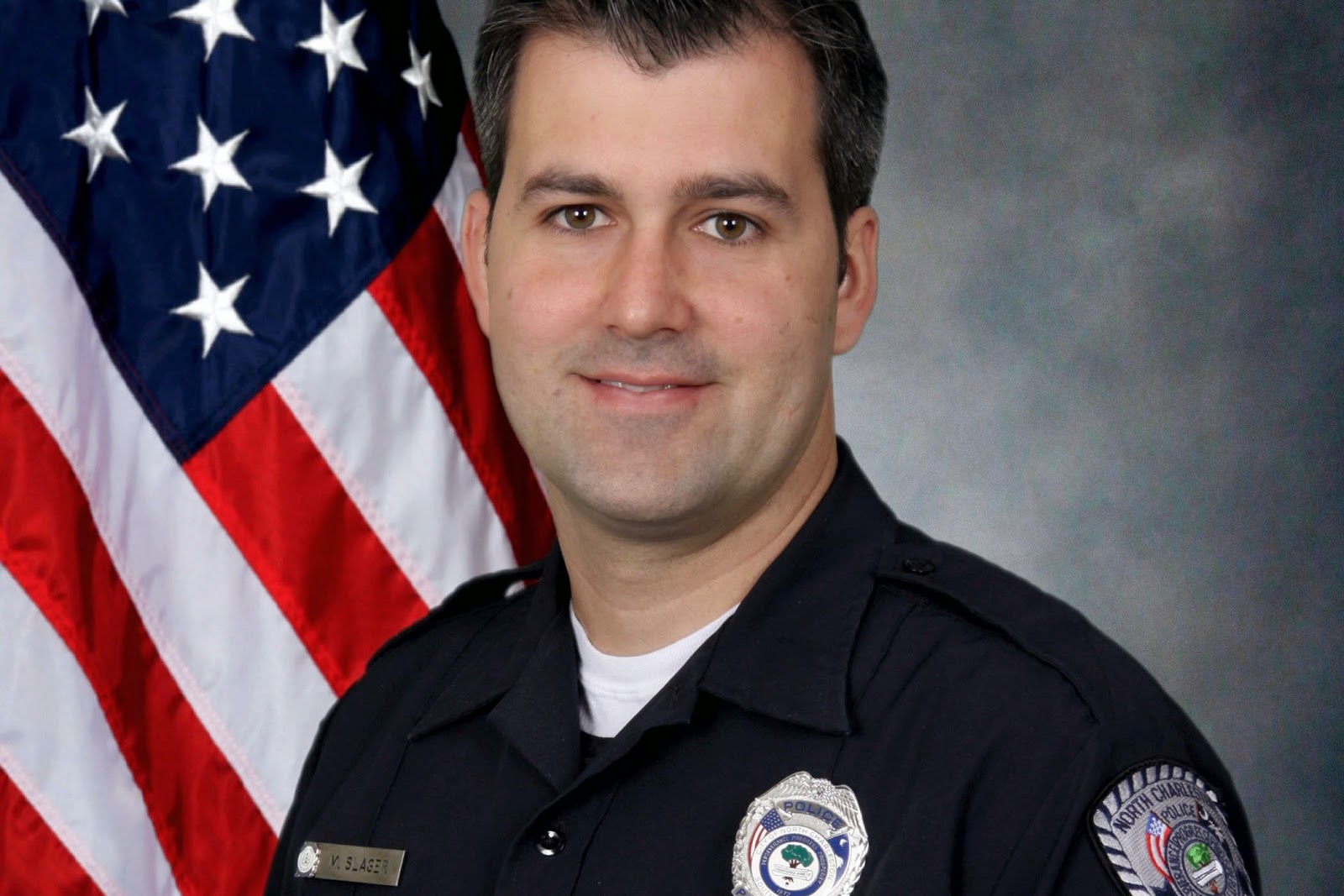 With the shooting in South Carolina, there was a rush to avoid a public outrage, considering the video evidence seen.  The normal procedure of:

was by-passed, and the shooter was charged with "murder" and arrested.  The family of the victim publicly insisted that Al Sharpton "stay away", which helped diffuse tension.  Sharpton uses words to enflame and endanger and is pathological in his deception, willing to fabricate and destroy.

The family of Walter Scott did what was best for their community in keeping the race baiter away.

Diffusion of rage came with the charge and arrest for "murder."

Will a "murder" conviction come back from a jury?

Or, will the prosecution be forced to adjust or even change its charges?

The police have released the dash cam video, and the video, itself, has been enhanced.  The video, therefore, can be "stitched together" beyond the short cell phone video initially released.  This increases the length of time and may show that the subject grabbed the officer's taser.

If the subject grabbed a police officer's weapon and ran, is it accepted practice to shoot a fleeing suspect, if specifically armed?

This is where the rush to charge may run into complications.

The questioning of charges filed, and the time period in which this was done, is not a justification of the shooting.  It is a question to be added to the equation.  We have not seen any evidence that links the officer to racism, thus far.

The statement initially made by the officer's attorney:

"When confronted, Officer Slager reached for his Taser, as trained by the Department, and then a struggle ensued.  The driver tried to overpower Officer Slager in an effort to take his Taser."

The audio of the police officer:

"Shots fired.  The subject is down.  He grabbed my Taser."

The short sentences are expected.  "He grabbed my Taser" is very straight forward language, and, on its own, very likely to be truthful.

The chief, before seeing the video, said, "This is part of the job that no one likes and wishes would never happen.  This type of situation is unfortunate and difficult for everyone."

He went on the premise of an altercation.

We do not have the officer's report as filed.

The video released was shocking and caused immediate reaction, especially given the racial animosity that has risen dramatically in our nation the last few years.

Here is the video from police and the witness, taken together.

Does it change anything?

Will it impact the "murder" charge?

If the suspect had the Taser, is it 'live'?

For law enforcement:  if you believe a suspect is armed and fleeing, are you to employ deadly force?

Was the rush to murder charge wise?

Would officials have been wiser to risk public backlash and suspend and investigate before charging?

Is justice being served?

Or, is there no change?


The folly of running from police isn't debated.  There are other issues, however, that will need to be addressed, beyond justice in this case.

With racial animosity where it currently is, can black neighborhoods be kept safe?  Will non black officers fear to use force when necessitated?  Will black police officers thus feel the same with white suspects?

Peter Hyatt as Statement Analysis Blog at 10:38 AM

A body found in the Mississippi River over the weekend has been identified as Minnesota fourth-grader Barway Edwin Collins who has been missing for nearly four weeks.

Authorities said the body of the ten-year-old was found on Saturday around 1pm by searchers from a Boy Scout troop - about ten feet from the river's edge in Brooklyn Center.

Crystal Police Chief Stephanie Revering said authorities have electronic evidence that shows the boy's father, Pierre Collins, 33, was in that area at the time the boy disappeared. However, she did not elaborate on the nature of that evidence.

Police said on Sunday that the boy's father is a primary suspect as the case becomes a homicide investigation.

'This location is consistent with our knowledge of Pierre Collin's activities on March 18 and he remains a primary suspect,' said Revering.

The Hennepin County Medical Examiner said the cause and manner of Barway's death are still being investigated.

The case is being considered a homicide based on the autopsy and information from the medical examiner, said Revering.

A report last month by Fox 9 said that according to sources, Pierre Collins, took out a life insurance policy in Barway's name totaling $30,000 not long before the child went missing.

The boy's father, who has said he is innocent, has not been arrested or charged in relation to the incident, but Revering said authorities have his passport to ensure he stays in the country.

Police were stationed at his apartment complex for his own protection after reports of death threats.

On Sunday, Pastor Harding Smith, of the Spiritual Church of God who has been acting as the family's spokesman said when the family received the news, there were a lot of tears, according to Twin Cities.

'There were lots of tears and lots of screams,' he said. 'There was disbelief, hurt, sadness. There is a deep sense of loss when you enter that home.'

Alexander Collins, executive director of the Liberian Ministry Association, said: 'We also want to make clear to the perpetrator of this tragedy, that wherever you are, you will be found. This evil will be found.

'Wherever you are hiding, under a car, underground, make no mistake our community does not abide this evil.'

In a March 25 interview with the Star Tribune, Pierre Collins said he was not home when his son disappeared and he was upset to be considered a suspect.

'I've been working with the police just to bring my son home,' he told the newspaper. 'I will do whatever they want just so Barway can come home. I have nothing to do with Barway's missing.'

His wife and Barway's stepmother, Yamah Collins, also said she and her husband did not know who took the boy, and they pleaded for his safe return.

Police released a video of Barway riding a bus after school. In the video, the boy said 'there's my dad' and 'there's my uncle.'

'The father and the party described as an 'uncle' are likely the last known people to have seen Barway,' Revering said, as reported by the Star-Tribune. 'Unfortunately, we have reason to believe that Barway's father has not been completely truthful with us.'

Addressing the footage on the bus, Pierre Collins explained to Nancy Grace that in the Liberian community, children commonly refer to adults as 'uncle' or 'auntie.'

When pressed by Grace about the failed polygraph test, Collins explained that he was 'very emotional' during the test.

'I wasn't...myself when I took the polygraph,' he said.

Barway, who was a student at Evergreen Park World Cultures Community School, was last seen after school last month.

The boy was reported missing by his father at around 6.30pm on March 18 after the child failed to come home from school.

A call to the school bus company revealed that the 10-year-old was dropped off outside his building at around 4.15pm.

Video surveillance from his apartment complex shows he was about to go inside, but then turned around as if he was called over to the parking lot by someone he knew, and he walked away, police said last month.

The family told the Star Tribune that Barway emigrated from his home country of Liberia, where his mother lives, to stay with his father in 2011.

The father said he wanted 'to make him better' and for Barway to eventually go to college.

This is murder and there's something wrong. I'm not making excuses for Michael Slager (I know...in the negative), but he broke with reality or something. There was a police car cam, a passenger in the car and other witnesses...yet he chased Walter Scott down shooting at him the entire time. Where was his mind? His humanity?

Jodi slipped up big time and it wasn't just me that caught it.

It supported something i said a long time back in relation to the sequence of events.
I wrote how i saw the event happening and the reasoning why.
I stated that her final act was the throat slit, i also said it was likely with her standing over him pulling his head back and facing a mirror, she wanted, needed to see him vulnerable and her being all powerful.

All along she claimed she couldn't remember what happened and there was disagreement over the order of events with some saying she shot him last.

She admitted she shot him first.

She then told Travis's family that he was still alive when she slit his throat.

This was her having a final attack on Travis and his family.

She took away the hope that he had died quickly and with little pain.
She wanted the final hurt to be inflicted, that their loved one was alive all the way through, conscious as she slit his throat to finally kill him.

She was gloating and it showed, she simply couldn't help herself such was her hatred of Travis and that he saw through her and didn't like what he saw.

There is at least one inmate who knows arias is coming and when asked if she (the inmate) would kill again if given the chance , replied "I hope so"