The following is from a tabloid, with quotes below for analysis. 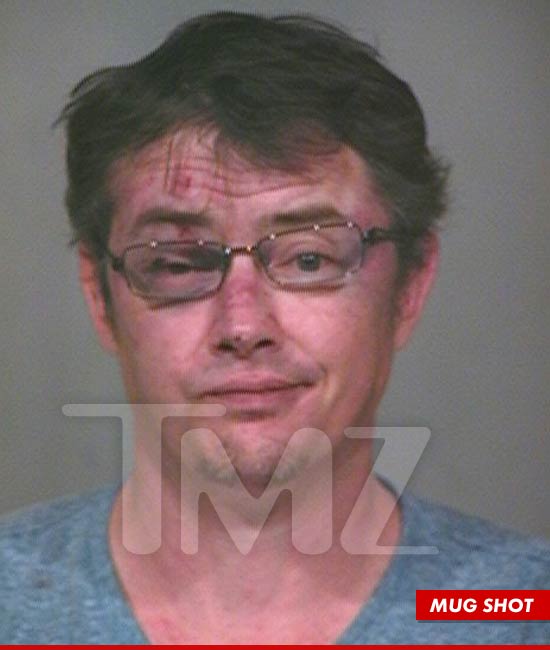 Jason London crapped himself in the back seat of a cop car Sunday morning ... minutes after the "Dazed & Confused" actor was punched in the face in a bar fight ... this according to a police report obtained by TMZ.

Here's what the report says ...

Cops were called to the Martini Ranch bar in Scottsdale, Arizona at 1:42 AM on Sunday morning after getting a call about a man who was bleeding on the street.

When officers arrived to the scene ... they found Jason nursing a swollen eye. Cops spoke to a bouncer who told them Jason had been inside the club, walked by him and sneezed on him.  The bouncer asked for an apology, and Jason allegedly punched him in the face.

40-year-old Jason was thrown out of the bar kicking and screaming and in the process he was beaten up.

Paramedics arrived to the scene to treat London, but cops say the actor got aggressive with the responders and shoved some of them. Cops say one of the officers was forced to deliver a knee strike to London's right thigh so they could seat him on the ground. London later called one of the officers a "f**king hillbilly."

Jason was eventually arrested for disorderly conduct/fighting and assault.

On his way to the police station ... Jason uttered a homophobic slur to the cops ... saying, "Guess what fa**ot?  I f***ing love this.  I f***ing own you guys so hard.  I'm rich and I'm a motherf***ing famous actor!  F***ing look me up, bitch."
heavy use of the pronoun, "I"
Note the use of a question without waiting for an answer.
Note the narcissistic rant;
Jason continued ... "It smells like s**t in your car and your breath smells like diarrhea."  According to the police report, Jason then leaned to the left and crapped in his pants.  Jason then said, "I told you I'm happy as s**t."

The next day, cops say they spoke with Jason's wife Sofia who told them ... "I know he's an a**hole when he drinks."

Cops say Sofia also told them she had spoken with Jason ... and he had no recollection of the incident.

Jason just tweeted about the story ... saying the police report is a "total f*cking lie."

Jason explains, "I got jumped by three 250 pound bouncers. They knocked me out and beat me for several minutes."
note the choice of three.

"I would never say or do the crap they are reporting. Have faith in me. The truth will come out and you will see."
Note that a denial of the statements would be "I did not say..." but instead he uses the verb "would never", which is not a denial.  "Would" is future/conditional tense and something deceptive people cling to.

Peter Hyatt as Statement Analysis Blog at 9:59 AM

@anon 10:19am, when I was young and doing things I shouldn't do, I passed 3 lie detector tests. That means NOTHING.

On the bright side, his brother Jeremy London just got off the hook for the domestic abuse charges he is facing. :)

Peter, please analyse the statements of the husband of missing Jennifer Ramsaran:
http://www.wbng.com/news/local/Husband-Speaks-Out-on-Missing-Wife-188917661.html

OT-
Dylan Redwine's parents both spoke on the news last night, recapping the mystery of his disappearance.

He was drunk. His wife stated to police he acts like a a-hole when he is drunk. He was hitting on another mans lady.

"I would never say or do the crap they are reporting."

Don't most police cars have cameras or recorders in them?

This is the same actor who stated he was abducted and held for ransom, a few years ago. I believe when he returned (from a crack house) he went directly to rehab.

Very sad to see what addiction can do to someone.

BostonLady,
That was his twin brother, Jeremy.

In 2010 Jeremy, who stared in the nineties hit show Party Of Five, claimed he was kidnapped in the Californian desert and forced to smoke drugs at gunpoint.

While many initially doubted his claims - including his own family and Jason - a man was later arrested and found guilty of kidnapping.

Jeremy went on to seek treatment for prescription drug use and then appeared reality series Celebrity Rehab With Dr. Drew.

He was arrested last year for domestic battery against his wife.

Ahhh sorry about that !! I didn't realize there were two of them - twins.

Thanks for the clarification!

I have never heard of this "rich and famous actor" until this post.

Can't say I blame the man for lying about that. I wouldn't want anybody to know I'd pooped myself either. Just sayin...

Not that I DID! lol! Just read that and it looked wrong!!!

you made it look worse when adding "I DID" (LOL)