Another "Parent of the Year" Candidate? 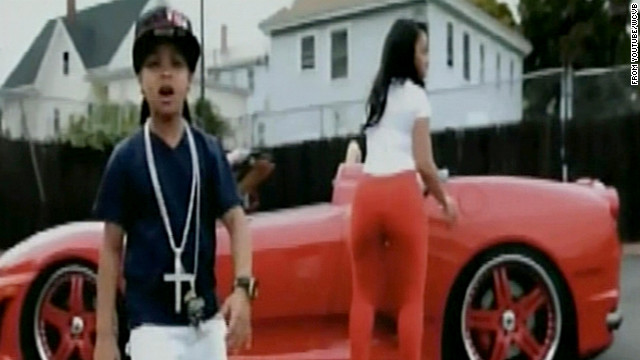 STORY HIGHLIGHTS
(CNN) -- A 9-year-old rapper's adult-themed music videos are finding some new viewers -- Massachusetts child welfare authorities.
The child, Luie Rivera Jr., whose stage name is "Lil Poopy," is seen in videos posted online, including on YouTube, smacking a woman's backside, flashing wads of cash, riding in a Ferrari and rapping about how "coke is not a bad word."
A separate video shows the young performer in a nightclub with a dancing woman in a sexually suggestive position, with people in the crowd throwing cash.
The Brockton, Massachusetts, police department contacted the state's Department of Children and Families after receiving a call from a "concerned citizen" who saw the boy in videos featuring sexual themes and drug references. The state agency is brought in when there is suspicion of physical, mental, or emotional abuse of a child, according to Brockton police Lt. Robert Sergio.
"An investigation is now open," said Cayenne Isaksen, public affairs director for the state agency. Isaksen would not discuss details about the investigation, but added that non-emergency investigations typically take no longer than 15 days.
Lil Poopy is a member of internationally known, Moroccan-born rapper French Montana's group, Coke Boys.
According to CNN affiliate WCVB, Luis Rivera, Lil Poopy's father, says his son is "not doing anything wrong," and that he planned on contacting his lawyer.
CNN has been unable to independently reach the elder Rivera.
Sergio said Monday that no court orders are in place and no criminal charges have been filed.
Peter Hyatt as Statement Analysis Blog at 9:31 AM

The atty, I would absolutely let one of my children participate in videos, if they had that type of talent ...

Talent? that type of talent.

He calls this Talent?
http://youtu.be/4Hi2cTlz4Gs

No, that is not talent, it is exploitation of a 9 yr old boy by his parents.

This is " Talent"
9 yr old boy sings on stage, no video of cars, booty, cash, or promoting cocaine necessary to gain someone's ear, attention, to listen. Difference of two worlds.

The atty, I would ABSOLUTELY let one of my children participate in videos, if they had that type of talent ...

ABSOLUTELY is an unnecessary word,the shortest sentence is always the best.

The atty, I would let one of my children participate in videos, if they had that type of talent ...

By using this extra word it weakens his statement which may suggest that he wouldn't allow any of his children to do the same.

Whenever I hear anyone say first:

"Absolutely" then continue on with their said, I question their integrity. It is persuasive lingo.

Who coined the word Absolutely -

Oh my god if they (CA, CA, GA, LA) were given a nickle for every time they said the word, they could buy Caylee a headstone in memorial, for people to go to, to pay their respects ... will never happen. Caylee who.

✓ gets my vote...It seems like everyone wants to be a little rock star.

Hmmmm, I wouldn't let my son participate in this type of thing, but then again I wouldn't parade my daughter in a toddler beauty pageant. I can't say this is worse than dressing a 2 year old as a hooker ~shrugs~

Talent? I don't see it. I see a little kid imitating the filth he's being raised in.