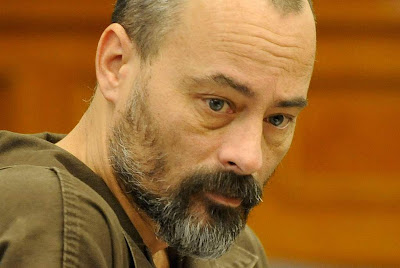 UNIDENTIFIED MALE (voice-over): November 26, 2010, residents of a small southern Michigan town are wrapping up the Thanksgiving holiday. This year`s celebration is different for the Skelton family.

Parents John and Tanya Skelton have recently separated, and their three sons, Alexander, 7; Andrew, 9; and 5-year-old Tanner are spending the holiday with their dad. He is scheduled to return the brothers home to their mother that evening, but they never make it.

JOHN SKELTON, FATHER: That they`re making it a murder investigation does not mean that the boys are dead.

Note the framing of the words "the boys are dead". This is not a confession (as an embedded possessive pronoun might show) but it is flagged and noted to see if other statements made will confirm or discard this red flag.

JEAN CASAREZ,
Tonight, to Michigan. Three little brothers just 5, 7, and 9 years old all together. They vanish without a trace.

They were last seen with their father this last Thanksgiving, John Skelton. He claims he gave the boys away to a woman he met on the Internet to bring the children to his estranged wife so he can go kill himself. But the suicide attempt fails.

Well, then Skelton claims he gave the kids to a secret organization nobody, not even he or the cops, can locate. Why? To protect the boys from their mother.

Cell phone records reveal Skelton may have crossed into Ohio right before the boys disappear. Volunteers, they search farms and lakes and creeks, but no sign of the boys.

Police now say they believe the boys are dead. Yet, they still haven`t found their bodies. And father John Skelton is now speaking out from behind jailhouse walls, where he sits on a $30 million bail. He`s saying they are alive.

We have that interview tonight. You can listen to the father, John Skelton, yourself.

One of the first questions I asked him of course is, "Where are the children? Where are your sons?"

His answer is that he did not hurt them,

Note that we do not have the direct question and the direct answer but if he was asked "where are the boys?" and he answered "I did not hurt them" then we can know that the question is sensitive and that in their deaths, he may feel that he did not inflict much pain.

that he has given them to an organization called Underground Sanctuaries. So right now he says he doesn`t know where the boys are, but he did not hurt them. He says that he was trying to protect them from his estranged wife, Tanya Skelton, though police have cleared her of any wrongdoing in this case.

He says that there`s no evidence that he has done anything wrong to the kids.

Note that there is "no evidence" is not that he didn't kill them. His answer is about evidence, not the boys.

I want to go back to Tom Wait, reporter, CNN affiliate WXYZ.

Did you ask him why, why the kids are alive and why he did this?

WAIT: Yes. I definitely got to motive right away.

I said to him, "Why would you do all this? Why would you put yourself through this?" Because he had said, you know, "I`m the only one volunteering to be in jail right now." And by that he meant, I did nothing wrong, I was trying to protect my kids.

Note that the reporter did what Skelton wanted: he interpreted Skelton's words, rather than listened to them.
Note that Skelton "volunteered" to go to jail, not that he was arrested and held on high bail.

His allegation is that his ex-wife -- or his estranged wife, I should say -- was abusing the kids. But again, police have said that she is not guilty of any wrongdoing in this case.

She does have a prior sex offender conviction from about a decade ago. So John says that that`s kind of where this comes from.

SKELTON: The boys told me that Tanya was -- they put it -- "sexing" them, which I tried to confirm with Tanya, but Tanya wouldn`t have anything to do with me. She wouldn`t talk to me about it or anything, and alienated me and started -- started alienating the kids from me and stuff. And I have to go with I don`t think my kids would lie to me.

Note that Skelton has just revealed his motive for killing his sons: revenge on his estranged wife.

Ellie Jostad, when he says "sexing," I don`t know if he means sexting, and I didn`t know 5, 7, 9-year-old boys sexted, or if he`s talking about something else. But we do have to lay out the facts here. The mother in all this, Tanya Skelton, is a registered sex offender.

She was convicted of fourth-degree criminal sexual contact. That involved a 14-year-old boy that worked for her then-husband, and it was my understanding or my recollection that this boy did something like yard work at properties they owned or something along those lines. But yes, she does have that in her history.

It is likely that this event never ceased in Skelton's mind. We would look for language that shows something started, but without end.

SKELTON: I was just -- I was spiraling out of control. Tanya -- I was depressed. Tanya played with my emotions to get the reaction that we got.

Pronouns tells us a lot. Here, and above, we see the focus of John
Skelton is John Skelton. He is a narcissist.

UNIDENTIFIED MALE: Why do you think they switched this to a murder investigation? What do you think leads them to believe that your kids are dead?

SKELTON: There`s nobody to corroborate seeing them. There`s no pictures of these people. We covered our tracks really well.

Note that Skelton is referring to the lack of evidence and believes that he has covered his tracks well. Police may believe otherwise.

UNIDENTIFIED MALE: Are your kids alive or -- I mean, is that what you`re saying by -- that you`re volunteering?

SKELTON: Yes. I refuse to let them go back to Tanya.

Note that in a compound question, the subject picks and chooses which to answer. We do not know what he is saying "yes" to; kids or volunteering.

UNIDENTIFIED MALE: Do you know where the kids are?

SKELTON: No. Unfortunately, that has escaped me as well.

Note that "no" is a strong answer. Then, each word he needs to add to "no" weakens it. "that has escaped me" is passive. Passivity seeks to withhold identity and responsiblity. He is being deceptive.

But Pat, is there any way possible that they have too much tunnel vision toward John Skelton?

PAT BROWN, CRIMINAL PROFILER: Not in this particular case. I mean, I like what the Morenci Police Department has said and what they`re doing, and how forthright they are.

He has told stupider and stupider stories. If he gave his kids away to this organization to hide them, he gave them away to maybe pedophiles. And on top of that, he says he wants to get them back but he`s going to kill himself. So who are they going to give them back to? His wife?

My analysis of this is that they have compelling forensic evidence that is coming out of the lab. That`s why they have changed this from a missing persons to a homicide case. They`re going to ramp up the pressure on him. And maybe in the future they`ll try to get him to at least, you know, with a plea deal, identify their whereabouts.

I would look at the routes that he typically drove in his employment and go to those areas that he may have stopped at overnight, and look in those various areas. I mean, he may have disposed of the children in a dumpster, but you can`t rule out bodies of water at these various locations along the routes where this man has traveled --

Note that the show only gave a small portion of the interview. When the interview transcripts are up, we will do the analysis.
Peter Hyatt as Statement Analysis Blog at 4:06 PM