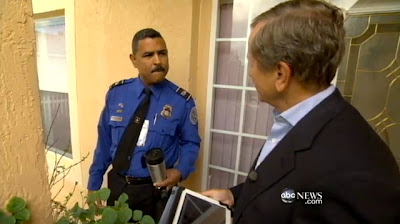 ABC News did an undercover sting operation catching a TSA agent stealing an iPad, on video, and then tracking it back to his house, where it set off an alarm.  They said he "lied" about it.

If you watched the TV show, did you know, from his language, that he was deceptive?

If you were falsely accused of stealing an iPad you would say "I didn't steal it." Or, you might say, "I didn't take it."  Even after being accused and saying "no", you would state plainly that you did not take it.  You would not have any agreement between yourself and your accuser.

He answered, "A missing Ipad?" in a question.  This makes the question of the missing iPad and ABC showing up at his door, from all other places, very sensitive to Andy Ramirez.

This is to agree.  This is not expected.  There is not agreement between an innocent and an accuser, but to Ramirez, he is acknowledging that they came to the right place.

It would have been better to have asked him, "What do you think of the stolen iPad?" but in any case, "Did you take it?" is still okay, even though "Yes or No" questions are the easiest to lie to.  Why is it okay?  See below:

Please note that "Yes or No" questions are easiest to lie to, and produce the least amount of stress.
The word "sir" is added to sound respectful.  Here, he has an opportunity to deny
it and after saying "No" he could have said, "I didn't take the missing iPad."  He repeated the "no, sir", making it sensitive.

Since "yes or no" questions are the easiest to lie to, it is better to seek to get him to enter the Free Editing Process so he can speak for himself, but since the Yes or No question was asked, another principle can be put into place:  No one can lie twice.

They could have asked him, "What would you say if I thought you were lying when you said, "no, sir"?  This would have put it to the test:  If lying, he could not look upon his lie and say "I told the truth."

They tracked it to his home and even set off the alarm.  It was beeping in his home.  Surprise, surprise. Now he is not only in trouble, but the laughing stock of the country.

He then brought out the beeping iPad and said, "my wife , I'm so embarrassed, my wife, my wife says that she got the ipad and brought it home"

They did not believe him.

Maybe he gave it to her in the car and she says this.  Maybe he met her for lunch.  Maybe she did bring it home from wherever he gave it to her, but it is not what he said.  He only reports what she "says" (present tense) and not what she did.  He did not lie.  He is deceptive.

He is counting on ABC (and the public) to interpret his words as if he said what his wife did.

This is how quickly a liar moves away from a lie.  Let the subject guide you by his words.  Listen carefully to his words.

He stole and was deceptive.  He is out of a job and maybe out of a marriage.

The value of the iPad is $600.
Peter Hyatt as Statement Analysis Blog at 4:27 PM

Off topic: Peter, I saw this update om Baby Lisa. I am passing it along in case you find it useful. There are no full quotes, but there are several partial quotes from LE.

Also Off topic: Peter, did you hear about the drug lab scandal in Massachusetts? That's some SERIOUS lying! She even lied about having a masters. Chemist randomnly lied about whether a substance was a narcotic or not, intentionally contaminated samples, forged initials, lied about weight (amount) of substances--this impacted at least 30,000 defendants over 9 yrs. t least 1,100 presently doing jailtime. It's going to turn the state
upside down! Absolute madness!

This is a great lesson on really listening to the exact words. As soon as he replied with "A missing iPad?", I thought, "uh oh!"

I'll immediately take hold of your rss as I can not in finding your email subscription hyperlink or e-newsletter service. Do you've any?
Kindly permit me understand in order that I could subscribe.
Thanks.

I used to be able to find good advice from your blog articles.

Feel free to surf to my website ... nuva genic review

Hurrah! At last I got a blog from where I can truly obtain valuable data regarding my
study and knowledge.

Wow, this piece of writing is nice, my younger sister is analyzing such things, so I am going to inform her.


Also visit my web-site :: be your own boss